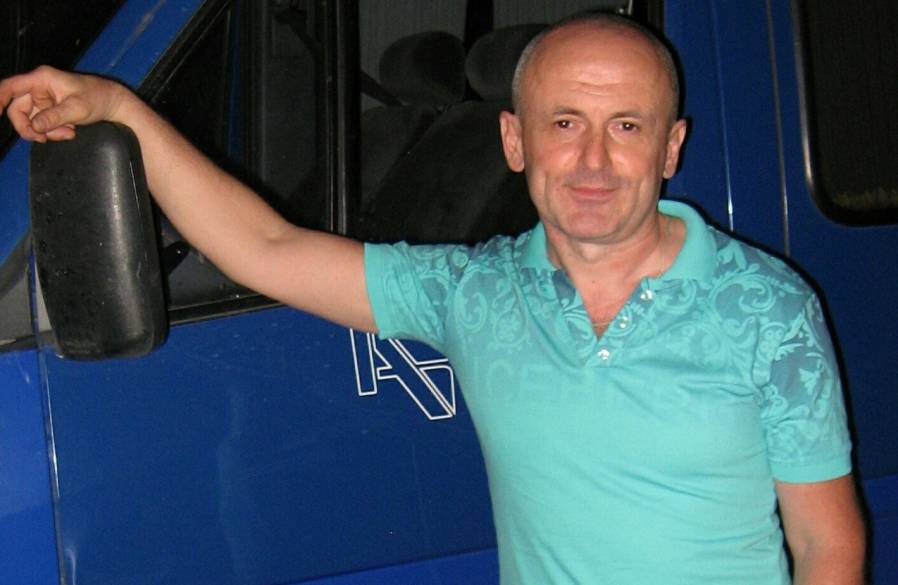 54-year-old Valery Matiushenko has been imprisoned in the self-proclaimed ‘Donetsk people’s republic’ since 15 July 2017.  The family had never concealed their pro-Ukrainian views, and shortly after Matiushenko disappeared, his wife Tatyana was directly warned that she would be next, and their son would end up in a children’s home.

The family are from Kalmiuske [until 2016 Komsomolske], a city in Donetsk oblast,  Valery is a musician, and played in restaurants, however he and his wife also had a small business.  She ran a shop, while he had a workshop where he fixed various household appliances.  The building was seized in 2014 by Russian and pro-Russian militants who turned it into a military unit.

Kalmiuske is 50 kilometres south of Donetsk and Ilovaisk and only just over 30 kilometres from the border with Russia.  Tatyana is clear that much of the shelling that they experienced came from that direction.  It was after the battle near Ilovaisk (at the end of August 2014), she says “that Russian military entered the city with their technology.”  Later Motorola (the notorious Russian mercenary Arsen Pavlov) hung the flags of ‘DPR’  Kalmiuske became a closed city, with the population terrified, especially after a number of ‘arrests’ in 2017.  There were at least four from May to July 2017, including that of Valery Matiushenko who was then 52.

Matiushenko disappeared on 15 July 2017.  His wife later learned that out on the street he had had a bag put over his head, and been taken away.  The first three days were the worst, with no information at all.  Then people from the so-called ‘DPR ministry of state security’ turned up to search their home.  They claimed that Matiushenko had confessed to spying for the SBU [Ukraine’s Security Service] and they were looking for his mobile which was supposed to provide proof.  Tatyana was forced to sign a piece of paper saying that she had thrown the phone away.

Two weeks later Tatyana left occupied Donbas, together with her son.  Pavlo had turned 16 just days before his father was seized.  They live in Sloviansk, where she tries to earn enough to also be able to send parcels to her husband.

Matiushenko himself was for some time held at Izolyatsia, the former factory, then cultural centre which the militants seized in 2014 and turned into a notorious secret prison.  This has been described by former hostages as a concentration camp both because of the conditions that the hostages are held in and the treatment that they are subjected to.  Tatyana says that she has met one of the people with whom her husband was held for some time.  He was released after his family paid a ransom of 50 thousand dollars.  The former hostage told her that Matiushenko had been subjected to terrible torture, and had three fractured ribs from the beatings, but that he had held himself well.

Later her mother was told that all ‘charges’ had been withdrawn from Tatyana and she decided to take the risk and see her husband at the so-called ‘trial’. She recalls that she went up to him and tried to take him by the hand and he looked through her and beyond.  She had the feeling that he was looking at his captors to see what their reaction was, fearful that they would grab her.

It seems he was right to be fearful.  Minutes after she returned home after the ‘trial’, several cars drove up with so-called ‘ministry of state security’ people inside.  She says that she spent the next three days sitting in the flat on the floor, too afraid to even turn on a light.  On the Sunday, a friend rang Tatyana’s father and said that the men from the ‘ministry’ had gone off to a nearby café and a fight had broken out.  Tatyana used this as an opportunity to escape. She dressed in her husband’s clothes and someone took her through the checkpoint into government-controlled territory without any papers.

28 March 2019 Matiushenko was sentenced to 10 years for supposedly collaborating with he SBU. He is now imprisoned in prison colony No. 32 in Makiivka, together with dozens of other Ukrainians, also imprisoned for alleged ‘spying’ who are held in separate barracks. They are seldom allowed ‘walks’ in the open air, and they receive no medical care.  According to Tatyana, her husband has the Tourette syndrome, a neurological disorder resulting in, for example, nervous tics.  Unsurprisingly, this is getting worse, doubtless because of the stress Matiushenko is under and the bad conditions.

Back in 2017, Tatyana was assured that her husband was on the exchange list, however he was not handed over during the last major exchange on 27 December 2017, and after that, she says, his name even disappeared from the list.

She is not the only wife of a hostage who feels aggrieved that Ukraine is not doing enough (or anything much at all) to help people imprisoned and tortured by the militants for their pro-Ukrainian position.