Zelensky urged to clarify his ‘red lines’ on Steinmeier format, Donbas and RussiaDonbas residents beg Zelensky not to withdraw Ukrainian forces while Russia claims it’s not their warMajority of Ukrainians against ‘special status’ for occupied DonbasRussian-controlled ‘Donetsk republic’ claims more Ukrainian territoryRussia installs former top Siberian official as prime minister of proxy Donbas republicInvaders stage fake referendum so they can accuse Ukraine of ‘invading Russia’ Russian horrific castration of Ukrainian POW was about terror and preventing own soldiers from surrendering Russia confirms plans to annex occupied parts of Zaporizhzhia and Kherson oblastsPutin’s new Russian ‘citizenship’ decree demonstrates plans to annex much more Ukrainian territoryEven in Russia, Putin’s ‘denazification’ claims prove no excuse for war against UkraineRussia is forcibly ‘mobilizing’ Ukrainians from occupied territory to fight its war against Ukraine Fake ‘referendums’ at gunpoint planned to try to ‘legitimize’ Russia"s invasion of Ukraine Russian soldiers shoot at Kherson protesters demanding that Russia get out of Ukraine Terror and abductions as Russia tries to break Ukrainian resistance in Kherson and other occupied citiesRussia has already greatly surpassed the Nazi Third Reich by insidiously launching missile and bomb attacks on UkraineChief Rabbi of Ukraine demolishes Putin’s excuse for Russia’s invasion Russia bombs a Ukrainian kindergarten and apartments in its war against independent Ukraine Putin will continue attacking until Russia is stopped. Help Ukraine defend its freedom today!Staged Donbas ‘evacuation’ and fake sabotage in Russia’s war against Ukraine. Where are the sanctions?Donbas ‘conscripts’ into Russia’s army could be deployed to fight Ukrainians
• Topics / Politics and human rights 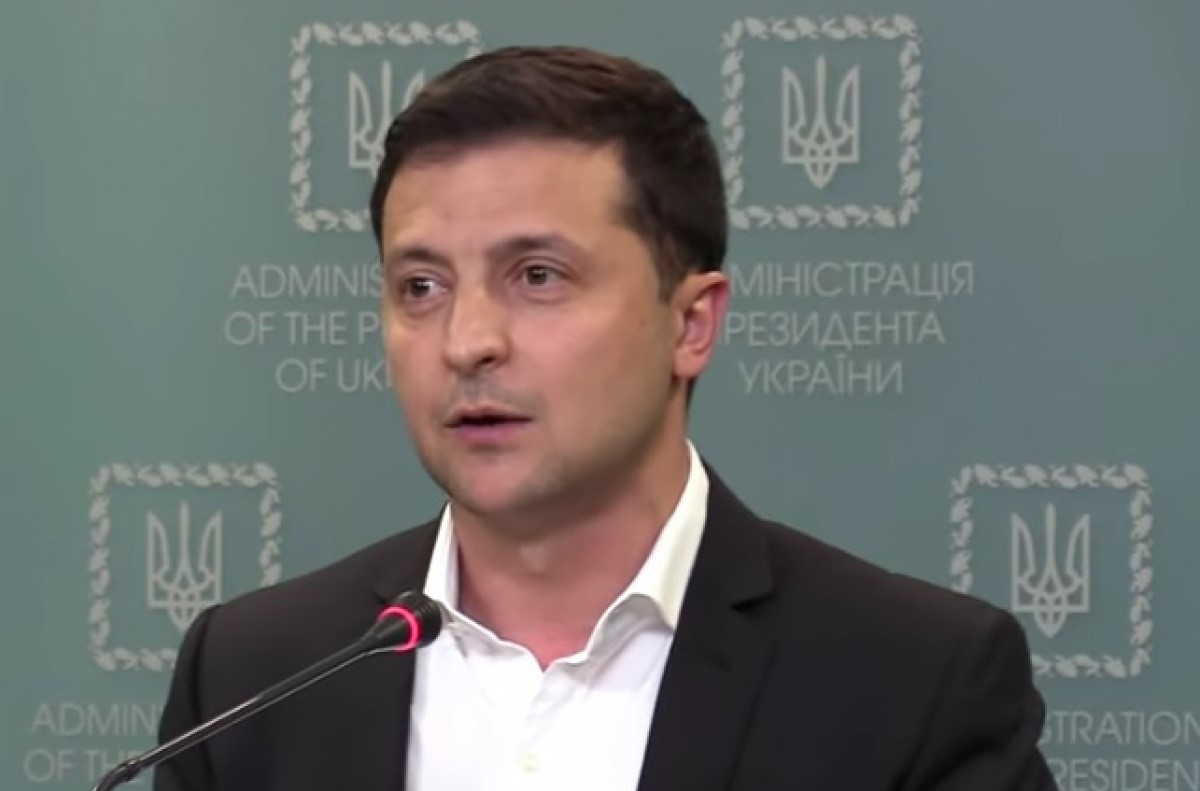 Russia and former President Petro Poroshenko are claiming that Russia has scored a victory by Ukraine’s ‘agreement to the Steinmeyer Formula’.  Neither they, nor most Ukrainian media point out that there was no joint agreement, but that each party signed their names under letters regarding the Steinmeyer Formula.  This may be significant since it seems very unlikely that either Russia or the Russian-controlled Donetsk and Luhansk ‘republics’ will agree to the conditions for ‘special status’ for these ‘republics’ that Ukrainian President Volodymyr Zelensky set out in a press briefing on 1 October.  If, that is, those conditions are in the document that Ukraine has officially signed.

Certainly the document that former Minsk negotiator Roman Bessmertny has posted, the planned agreement seems based on the Steinmeyer Formula.  Back in November 2015, Franz-Walter Steinmeyer, who was then Germany’s Foreign Minister, proposed that a law on special status for the so-called ‘Donetsk and Luhansk people’s republics’ would come into effect on the day local elections were held, with this then confirmed if the OSCE observers agreed that the elections had been held without violations.

The danger was seen back in 2015, and now, as being that the OSCE would be under pressure to look the other way and not notice the violations, especially when Steinmeyer’s idea was that such ‘elections’ would have already launched the law on special status before the OSCE’s verdict.  Such a law was unpopular in Ukraine in 2014-15, and is distrusted by many now also.

The grounds for such distrust seemed confirmed in 2015 when Moscow responded with anger to Ukraine’s demand that any special status follow honest elections with international observers.  On 17 March 2015, the Verkhovna Rada adopted a resolution and law on special status for the areas in question.  Resolution No. 2396 stipulated that the areas under militant control would be deemed temporarily occupied territory until all illegal armed formations and their military technology, as well as fighters and mercenaries were withdrawn from Ukrainian territory, and full control was reinstated over Ukraine’s state border.  According to the amendments to the Law on Special Status adopted that same day, special status with limited self-rule would be granted after elections were held in accordance with Ukrainian law and with proper international observers.  Russia claimed this to breach the Minsk Accords, although Germany and France welcomed the moves as being in accordance with Minsk.  Sergei Lavrov, Russia’s Foreign Minister, claimed, for example, that Ukraine was linking special status with elections in which the militants would not take part.   In fact, Ukraine was demanding only that the elections were not held at gunpoint, as had been previous electoral stunts in Donbas that even Russia stopped short of recognizing.

If we go by Zelensky’s briefing on Tuesday evening, then nothing at all has changed.  Zelensky was adamant that for free and fair elections to be possible in occupied Donbas, “the border must be ours” and “there must not be any military”.  There can be no elections at gunpoint, Zelensky stressed. He was also emphatic that any elections must be held in accordance with Ukraine’s Constitution and legislation, and found to have been in accordance with democratic standards by the OSCE.

If that is the case, then why are state-controlled Russian media and Russian politicians declaring Moscow’s victory?

Since any victory for Russia has translated into bloodshed and suffering for Ukraine, many Ukrainians are either concluding that Zelensky is on the brink of capitulation and / or that he is hiding something.  Poroshenko’s European Solidarity Party reacted most strongly, effectively accusing Zelensky of playing into Russia’s hands.  Holos demanded that Zelensky attend a parliamentary session and explain exactly what document was signed on 1 October.

Zelensky knows that his every word at the briefing on 1 October was closely followed by Moscow, as well as by Ukrainians, and that any discrepancy between his words and the signed document will elicit response.  It seems difficult to understand what he would stand to gain by lying.  He still enjoys a large following and would surely be better off trying to present any capitulation as enforced by the need to save lives, secure prisoner releases, etc. than to present clear red lines and vow not to cross them when he had already done just that.

It might prove difficult to establish criteria for deciding that occupied Donbas was sufficiently free of the Russian military whose active presence Moscow has already spent over five years denying to be able to hold local elections.

It is surely less difficult to determine whether or not Ukraine has re-established control of the border.  If Zelensky knew he was going to give in on this, why mention that critical red line at all?

The problem with Steinmeyer’s formula is that it totally ignores fundamental facts about the situation.  Free and fair elections according to Ukrainian law and OSCE standards mean that everybody who is entitled by place of registration / residence to vote, can do so without fear of reprisals or imprisonment.  Hundreds of thousands of Ukrainians are currently living outside Donbas.  While it is mainly those who have openly demonstrated pro-Ukrainian views or opposition to the so-called ‘republic’ who have most reason to fear for their safety in the so-called ‘republics’, there have been plenty of cases where people have ended up seized, tortured and held hostage for no apparent reason.  Oleksandr Timofeyev has been imprisoned in ‘DPR’ for over two years after trying to travel to Makiivka to visit his wife’s elderly and paralyzed mother.  He was ‘sentenced’ to 14 years’ imprisonment for supposed spying after a thoroughly dubious ‘trial’ and after his family was unable to come up with a 20 thousand (and then 30 thousand) dollar ransom.  Judging by the hostages who have been able to tell their stories after being released in late December 2017, there is every reason to believe that many civilian hostages imprisoned in the ‘republics’ are there on dodgy grounds, or none at all.

There is no freedom of speech, no independent media and most Ukrainian Internet sites are blocked. Try holding a peaceful demonstration, and you will find yourself imprisoned. At least two Ukrainian journalists / bloggers – Stanislav Aseyev and Oleh Halaziuk – have been imprisoned for over two years because of their truthful reports on the situation in Donbas. There would be no possibility for any candidate with a pro-Ukrainian position to stand, and even if some intrepid soul were found, it is likely that voters would be too frightened that their votes were not secret to vote for the candidate.  These are just a few of the reasons why any talk of waiting to hear whether observers find violations is disingenuous to the point of total deception.