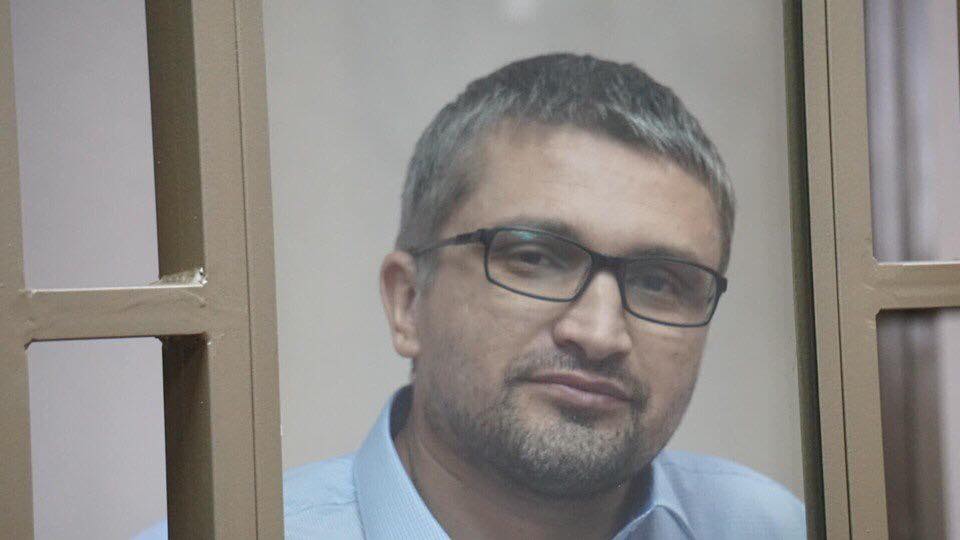 A court in Russia has sentenced Crimean Tatar civic journalist Nariman Memedeminov to two and a half years’ imprisonment and banned him from running websites for two years.  The sentence was lighter than the six years demanded by the prosecutor, which could just possibly be because the charges were so evidently absurd.  The judges in such overtly political trials seldom step out of line, however, and it may also be that the lighter sentence passed by the South Caucuses Military Court is aimed at deflecting international attention and could be overturned later, on an appeal from the prosecutor.

36-year-old Memedeminov has already been imprisoned for over 18 months, so if this sentence is upheld at appeal stage, he would have one year left in a low-security prison colony.

The sentence only highlights the grotesque nature of this case. Armed and masked men burst into Memedeminov’s home on 22 March 2018, used foul language and gratuitous force and forced Memedeminov to the floor in front of his three terrified children.  He was taken away and has been imprisoned since though, although the charges against him only pertained to three innocuous YouTube video clips, two of which pre-dated Russia’s invasion and annexation of Crimea.

They did nothing of the sort.  In the video posted on 7 June 2013, Memedeminov pointed to a gathering of Hizb ut-Tahrir followers behind him, explaining the essentially theological aspects of Muslim faith that would be discussed.  Hizb ut-Tahrir is a peaceful pan-Islamist movement which is legal in Ukraine, and this meeting was, even Russia would not deny, taking place on Ukrainian territory. Russia is the only country in the world to have declared Hizb ut-Tahrir ‘terrorist’ and has never provided any good grounds.  Since 2014, it has been using ‘terrorism’ charges for political trials and imprisonment, including in occupied Crimea.

In his powerful final address, Memedeminov noted that “all who are implicated in persecution and repression of Crimean Tatars, Crimean Muslims” want to hear him repent of supposed crimes.  They need this, he explains, to try to prove that they “arrest terrorists, extremists” not Crimean Tatars, and to try to justify their behaviour before the international community.

“Yet this is really nonsense: people lived for decades after their return from places of deportation, and now, sudden, in an instant, they became terrorists, extremists.  they became those who threaten the security of the state..  Moreover, they became such after armed people violated this security…”

“We arrest and try people, and you come and begin showing what is happening with your mobile phone, your reports and articles. … Oh, so it’s with the reports and articles that you begin to threaten the security of our state… That’s Article 205, terrorism, and in your case, 205.2 – public justification of terrorism”

The charges against Memedeminov were so senseless that there were fears that the FSB would try to concoct others while Memedeminov was already in detention.

This did not happen, nor did the prosecution even do more than come up with some absurd ‘expert assessments’ of the videos which Memedeminov and his two lawyers (Emil Kurbedinov and Edem Semedlyaev) demolished during the hearings.  Memedeminov, for example, questioned the claim in the indictment that, by posting these videos, he was “drawing an unlimited circle of people into the activities of the organization” and challenged the FSB witness, Alexander Kozhemyakov to explain how others who had posted material about such meetings were not considered to be having such an impact on “an unlimited circle of people”.  This was one of a number of questions that Kozhemyakov was unable to answer.

Russia is brazenly persecuting Crimean Tatar activists and civic journalists in order to silence information about persecution in occupied Crimea.  It is vital that Memedeminov’s case gets maximum security, especially since there is concern that the FSB may force through a harsher sentence at appeal level.  This was already seen once with the ‘trial’ and sentence of Ruslan Zeytullaev, who was put through three court stages until the FSB got the huge sentence they were demanding.