Zelensky urged to clarify his ‘red lines’ on Steinmeier format, Donbas and Russia 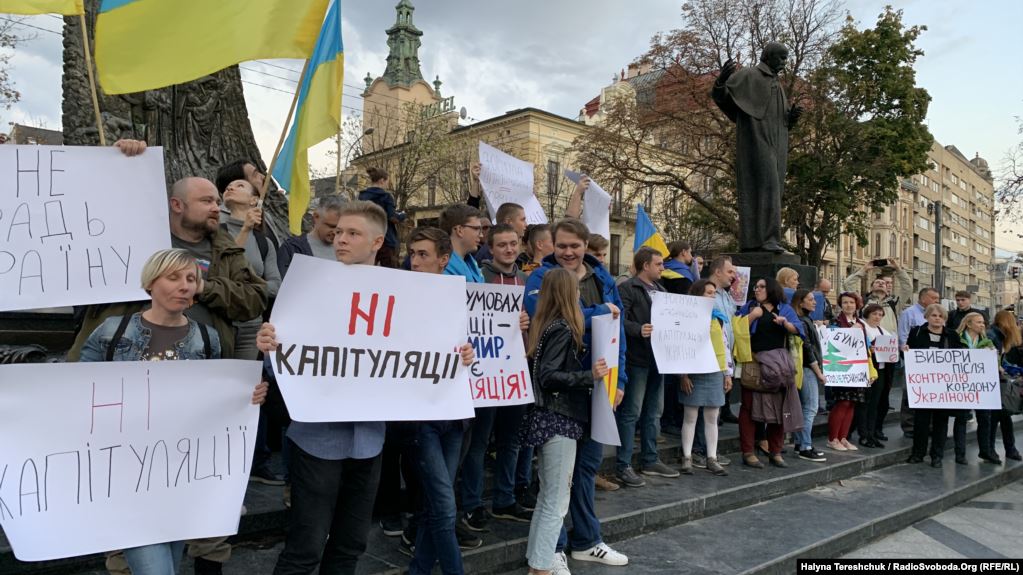 Protests are continuing throughout Ukraine over President Volodymyr Zelensky’s announcement on 1 October that Ukraine has agreed to the controversial Steinmeier  format regarding occupied parts of Donbas.  If the President hoped that his press briefing at which he swore that no red lines would be crossed would allay fears of capitulation to Russia, he was mistaken.  Among the problems articulated by prominent human rights groups and well-known civic activists is the lack of any real clarity as to the ‘red lines’ that Zelensky spoke of, as well as unease that he does not understand which concessions are unacceptable to a majority of Ukrainians.

Maria Zolkina is political analyst for the Democratic Initiatives Foundation which regularly carries out surveys of public opinion, including, of course, on issues regarding Ukrainian sovereignty and acceptable measures for ensuring peace in Eastern Ukraine.  In an article entitled ‘The Devil is in the Detail. What Zelensky keeps silent about’, she notes that the President has not understood that “it is totally unacceptable to go to a meeting with [Russian President Vladimir] Putin without having explained to the Ukrainian public how he envisages the peace that he is planning to negotiate.”

This is also dangerous, she stresses. “People want peace, but not at any price. They see the future of the occupied territory within Ukraine, but in general on pre-war conditions, without ‘special status’. Zolkina acknowledges that the closer one gets to the frontline, the greater the willingness for compromise, however there are limits. “Nowhere, not even near frontline Donbas, do the public support elections on Russian conditions, a total amnesty, or the further formation of law enforcement bodies in the so-called ‘Luhansk and Donetsk people’s republics’ [LDPR] solely from local residents.  These three ‘roads to peace’ are not accepted anyway, from Lviv to Stanytsa Luhanska.”

If the President does not view this as an argument, there will be new public upheaval.  The ensuing protests will only be good for Putin who will be able to push his narrative about a supposed civil conflict.

Zolkina is very sceptical of Zelensky’s tough words at the press briefing, about Ukraine’s demands.  This is all theory, she says, with the reality being that Zelensky will be going off to meetings in the Normandy format, “with clear enthusiasm to get a peaceful agreement” with German Chancellor Angela Merkel and French President Emmanuel Macron seeking to promote this in every way.  It is those ‘details’ that end up being drawn up that will give the law to the theory, she warns.

“Given the general secrecy with all processes regarding Donbas, including on negotiations with Russia, words about broad future discussion of the draft law inspire no trust. “   The greatest danger, she suggests, is that such a law is likely to be contingent on Normandy 4 negotiations.  What ‘road to peace’ gets agreed there will be what gets presented to parliament (where Zelensky’s ‘Servant of the People’ party has an absolute majority).

The same concerns arise over the future special law on local elections in LDPR.  Who knows what will be in this specially produced law and who can guarantee that it will not stipulate special conditions for such elections?  The apparent guarantees inherent in assurances that elections must be in accordance with Ukrainian legislation and the Constitution would thus be rendered meaningless. The real nature of such ‘elections’ could thus be manipulated in the details of such a ‘special law’ – a law, Zolkina notes, that is not demanded by the original Minsk Accords.

The Ukrainian Helsinki Human Rights Union and Kharkiv Human Rights Group issued a statement on 2 October regarding the President’s words  about what had been agreed in Minsk the previous day.  Zelensky said that the discussions had covered: the next stage in freeing people illegally imprisoned in Russia or on occupied territory; agreement on disengagement of forces near Petrivske and Zolote; agreement on the so-called Steinmeier  formula regarding local elections and a law on ‘special status’. Zelensky promised that this new law would not cross any red lines.

Given the public concern and the importance of this for each Ukrainian citizen, UHHRU and KHPG have set out their position .  They believe that the agreement reached in Minsk does not take into account the current situation in Ukraine, with this situation determining Ukraine’s red lines.  The public have yet to hear what the position is that will be presented by Ukraine at the next meeting of the Normandy 4.

In clearly formulating this position, they recommend the following steps.

1. Clearly articulate the situation that Ukraine is in, stating that Russia is carrying out the crime of aggression against Ukraine and is occupying part of Ukraine’s territory.

2. Clearly stipulate the order in which actions are to take place, for example, whether the freedom of people held illegally is the first step or the withdrawal of all military forces; reinstatement of control over the state border or the holding of local elections.

3.  The obligation should be imposed on the aggressor state to withdraw all forces with the means of monitoring implementation.  By forces are meant not only those regular formations and units under the control of Russia’s Defence Ministry, but also units and special formations subordinate to other enforcement bodies; their advisers; instructors and unlawful armed formations, armed gangs and groups of mercenaries, created, subordinate to, controlled and financed by the Russian Federation; as well as employees of the Russian occupation administration.  This process should also include the withdrawal of heavy military equipment and ammunition provided between 2014-2019 to the so-called LDPR.

4. . Agreement on liberation of territory would include a clear list of such territory and its boundaries, with full reinstatement of Ukraine’s control over its border directly dependent on this.

5.  Other protective mechanisms are also needed to prevent unpleasant ‘surprises’ and the consequences of flagrant rights violations caused by this or that ceasefire formulations. These include: ratification of the Rome Statute (on the International Criminal Court); introducing institutional reform of the law enforcement bodies to ensure investigation of crimes committed as a result of the armed conflict; institutional reforms of the security sector and creation of the relevant independent unit within the Prosecutor General’s Office to coordinate investigation of such crimes.

6.  The public need to know whether Ukraine will continue its inter-state legal cases against Russia at the European Court of Human Rights and other international legal bodies over Russia’s violations of international law.

7.  Any agreement which stipulates Ukraine’s obligations must undergo procedure for legitimization, and it would be sensible to consider procedure for participation by the Verkhovna Rada (parliament) in giving consent for Ukraine to take on such obligations. This would promote national dialogue and public harmony with respect to overcoming the consequences of the armed conflict.  Public and political consensus needs to be achieved before the signing of agreements in an international format.

8.  Since it is not yet clear how Ukraine’s interests and legitimate demands are to be met during local elections in LDPR, Ukraine should stress to its international partners that the process may take one and a half to two years of preparation (logistical elements; staffing; determining the jurisdiction of the parties (Ukraine, Germany, France); security conditions and providing information to deoccupied territory about the elections; access to LDPR of observers and members of electoral commissions, etc.  A working plan needs to be drawn up and approved by the Cabinet of Ministers and by international partners.

9.  UHHRU and KHPG do not see grounds for the OSCE to have a monopoly on observing the local elections. It would be worth demanding equal participation by the Parliamentary Assembly of the Council of Europe and the UN, or their affiliated bodies.  Their conclusions would be taken into account together with those of the OSCE.

10.  Following withdrawal of all military forces (and all agents of the Russian Federation), de-mining and other measures to make the territory and buildings safe should be carried out.

11.  Before local elections are held, documentation of all Ukrainian citizens needs to be ensured, including those who became of age during the occupation period or who were otherwise obstructed from receiving their internal documents.  Real and safe access to the elections must also be ensured for all internally displaced persons from the territory in question.

12.  Before the local elections, effective investigations need to be begun on the basis of laws brought into line with international humanitarian law and sentences need to be passed over the gravest crimes carried out as a result of the armed conflict and the question of an amnesty in accordance with international humanitarian law for some combatants. Lustration procedure also needs to be carried out with respect to citizens of Ukraine who collaborated with the Russian occupation administration.

13.  Both the process of achieving agreement and implementation of such an agreement need to be public and transparent. There has clearly not been such openness up till now, and the public do not know whether Ukraine’s President understands all the risks which Ukraine agrees to under this or that format of the negotiations and whether leading specialists were involved in the negotiations. Such uncertainly only heightens social tension and is not conducive to achieving public consensus and dialogue regarding reinstatement of part of the occupied territory.

14.  UHHRU and KHPG point out that even if Ukraine’s interests are protected in these negotiations and the formats for achieving peace, Ukraine’s authorities, media and public are still insufficiently ready, either psychologically or in practical terms, for the process of reinstating control over the territory. Ukraine does not have either a national model for justice during a transitional period, or a comprehensible step-by-step plan regarding what will take place in different spheres; how the work of state bodies will be reinstated; how the safety of the civilian population will be guaranteed the day after control is reinstated.

The human rights groups welcome moves to peace for the country, but stress that this path to peace must be based on the principles of justice during a transitional period and must be in compliance with the interests of national security; international humanitarian and human rights legislation.