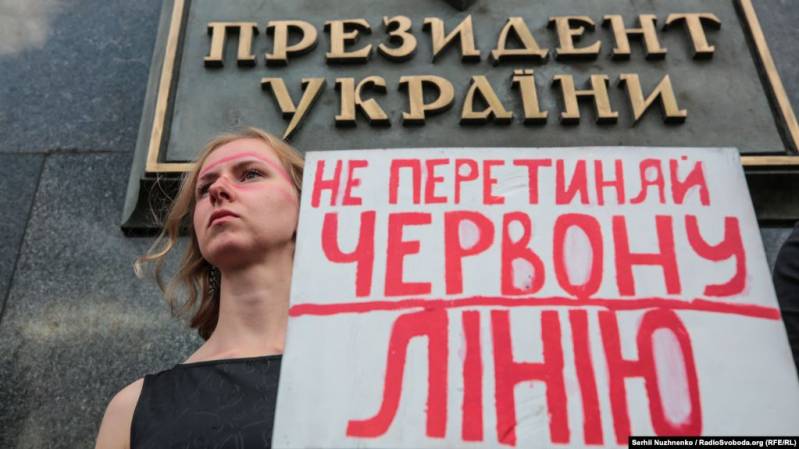 On October 1, 2019, President of Ukraine Volodymyr Zelensky made a statement containing several points on discussions held and agreements reached during the meeting of the Trilateral Contact Group in Minsk on October 1, 2019:

1) the next stage of the release of persons unlawfully deprived of their liberty by the Russian Federation and Russia-controlled proxies was discussed;

3) Ukraine agreed to the so-called Steinmeier formula, and the President also stressed that local elections in Donbas can only take place under Ukrainian law, after the troops are withdrawn and Ukraine regains control over its state border.

According to the President, the Steinmeier formula is a mechanism under which the temporary law on the special regime of local self-government in certain areas of Donetsk and Luhansk oblasts, also called the law on the special status of Donbas, will become permanent, provided that local elections are held in accordance with the Constitution of Ukraine and Ukrainian law, as well as after the publication of an OSCE report confirming that said elections have been held in accordance with OSCE and international standards for democratic elections. Another important thing to consider is that the law on the special status of Donbas will remain in effect until December 31, 2019. There will be a new law that will be developed by the Parliament in close cooperation and discussion with the public[1].

According to the Head of State, no red line will be crossed in the new law. "That is why there is no and never can be a capitulation," said the President;

4) as for the date of the withdrawal of Russian troops from the occupied territories of Donbas and the pre-election safeguard measures that must be taken before the withdrawal, Volodymyr Zelensky said that this would be discussed during a Normandy format summit. Also, “it will be specified. In elections (legislation on elections - ed.), it is impossible to do, because elections must be held in accordance with our legislation. We will discuss this. If anyone remains there, there will be no elections. I’m sure you understand that. We will take safeguard measures. We will not proceed with the elections as long as there are soldiers there,” stressed Volodymyr Zelensky.

Given the high-profile nature of this issue and its importance for every citizen of the country, for peace and security, UHHRU and KHPG consider it necessary to express its own stance regarding the position voiced by the President of Ukraine.

In our opinion, the agreements reached do not take into account the current situation in Ukraine, which is what actually defines the red lines that Ukraine cannot cross without loss of sovereignty, risks of human rights violations and harm to the interests of the conflict-affected population. The public was not told what position (conditions, safeguards) Ukraine is going to present during negotiations at the upcoming Normandy format summit announced by the President of Ukraine.

When deciding on Ukraine’s position in the future negotiations (in any effective formats), UHHRU and KHPG consider it important to take into account the following:

1) Ukraine’s situation should be described clearly: the Russian Federation is committing a crime of aggression against Ukraine and occupies a part of its territory;[2]

2) the order of actions should clearly defined: what is primary and what should be the next step, whether it is the release of unlawfully detained persons, withdrawal of all troops, regaining control of Ukraine’s state border, holding local elections, etc.

4) agreements on the release of territories should provide for a clear list of such territories and their boundaries. The issue of regaining full control over Ukraine’s state border depends on it.

5) other safeguards should be provided to prevent unpleasant surprises as well as gross human rights and international humanitarian law violations, which some truce formulas could lead to. Such safeguards should include the ratification of the Rome Statute, launch of proper institutional reforms of law enforcement agencies in the context of investigations into crimes committed in connection with the armed conflict, institutional reforms of the security sector, creation of an appropriate independent expert unit within the Prosecutor General’s Office to coordinate investigations of conflict-related crimes;

6) the public should be informed as to whether Ukraine is going to continue pursuing inter-state complaints against Russia in the ECtHR and other international tribunals for violations of international law;

7) any agreements on Ukraine’s commitments should be properly legitimized. Given the expert debate surrounding the status of the Minsk Protocol, it would be prudent to provide for a procedure that would require the approval of the Ukrainian Parliament before Ukraine could agree to any commitments. This move, along with inclusive informational support, will foster nationwide dialogue and agreement on how to overcome the effects of the armed conflict. One should also keep in mind that the laws on the implementation of any such commitments will have to be adopted by the Parliament of Ukraine. Therefore, social and political consensus must be reached before committing to anything - that is, before signing any international agreements; [1] [2]

8) since it is still unclear how Ukraine’s interests and legitimate demands will be represented during local elections in non-government-controlled areas of Donetsk and Luhansk oblasts, Ukraine should explain to its international partners that this process could take 1.5-2 years in order to make arrangements for logistics and personnel, to determine jurisdiction of the parties (Ukraine, Germany, France), security measures and steps for providing objective information about local elections to the population of the temporarily occupied territories, as well as to ensure access to these territories for independent observers, members of election commissions, etc. To this end, an action plan should be developed, adopted by the Government of Ukraine and approved by international partners;

9) in our opinion, it is unreasonable that the OSCE has been given the monopoly in observing local elections. Equal participation of the PACE and the UN or their affiliated bodies should be demanded, with their findings, along with those of the OSCE, considered as a whole;

10) after the withdrawal of all troops (and all Russia’s agents), demining and other measures should be carried out in order to make the territories and installations safe before the elections;

12) also, before the local elections, effective investigations should be initiated (based on laws brought in line with international humanitarian law); sentences should be delivered concerning the most serious crimes committed in connection with the armed conflict; the issue of exemption of individual combatants from criminal liability/amnesty (in accordance with international humanitarian law) should be addressed; vetting of government bodies should be effected in order to identify Ukrainian citizens that collaborated with Russia’s occupying administration;

13) the negotiations, as well as the implementation of the reached agreements, should be public and transparent. The content of the document setting out the terms and format of the agreements as well as the closed negotiation process and lack of information on the persons and experts involved clearly do not make this process sufficiently transparent or understandable for the public. The public has not been told whether the President of Ukraine understands all the risks that Ukraine agrees to under certain truce formats and whether leading experts are involved in the negotiations. This, in turn, creates tension in society and does not help to promote public consensus and dialogue on the issue of regaining control over a part of the occupied territories;

14) even if Ukraine’s interests in these negotiations and peacemaking formats are protected and the President of Ukraine knowingly accepts reputational and political risks for the sake of the country and the well-being and security of its people, the public, media, and the government are obviously not ready for the process of regaining territorial control, neither psychologically nor factually or procedurally. Ukraine has neither a national model of transitional justice nor a clear step-by-step plan on what is going to happen in various areas of life, how to resume the work of state authorities, how to ensure the safety of the civilian population and other issues that will have to be addressed after regaining said control.

The Ukrainian Helsinki Human Rights Union and the Kharkiv Human Rights Protection Group welcome the move toward peace for the country and its people and are willing to support the government and society on this undeniably difficult path. However, this move should be based on the principles of transitional justice as well as respect for national security, international humanitarian law, and international human rights law.

[2] The Law of Ukraine "On Peculiarities of the State Policy on Ensuring the State Sovereignty of Ukraine in the Temporarily Occupied Territories of Donetsk and Luhansk Oblasts",

The Law of Ukraine “On Ensuring the Rights and Freedoms of Citizens and the Legal Regime in the Temporarily Occupied Territory of Ukraine”.