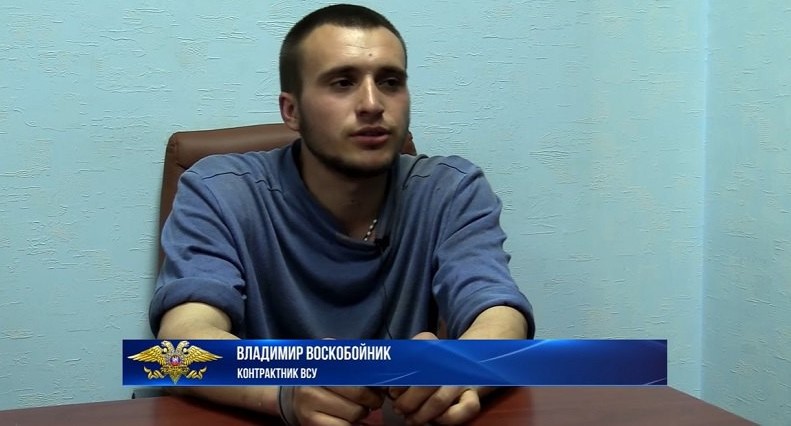 A Ukrainian soldier captured by militants from the self-proclaimed ‘Donetsk people’s republic’ has been sentenced in DPR to 30 years’ imprisonment.  The Russian-controlled militants are claiming that 21-year-old Volodymyr Voskoboinyk was planning acts of ‘sabotage’.  The young man is a prisoner of war who should not be prosecuted, and certainly not on the basis of a ‘confession’ that was almost certainly extracted through beatings and torture.

Voskoboinyk was just 19 when he volunteered to join the Ukrainian Armed Forces.  He had wanted to join in 2014, after his brother-in-law was killed fighting in Donbas, but was too young.  His father died in 2014, and he remained at home with his mother, since his four sisters are older and live separately.

He was due to replace a colleague during the night from 23 to 24 May 2018, but did not turn up and the ensuing search for him found nothing.  It was only on 28 May, after the so-called ‘DPR police’ released a video with his ‘confession’, that it became clear that he had been taken prisoner.  The SBU [Ukraine’s Security Service] has added Voskoboinyk to its list of hostages and POWs for exchange, however the last such exchange in occupied Donbas was on 27 December 2017.

The Russian proxy ‘republics’ have followed Russia’s FSB in invariably producing videos where hostages or POWs totally under their control admit to working for the SBU / Ukraine’s military intelligence and / or spying, planning sabotage, etc.  Here the militants themselves claimed that Voskoboinyk had been captured with a machine gun and a hand grenade, and that he had supposedly understood the error of his ways.

This is a propaganda video aimed essentially at pushing Moscow’s narrative about the war in Donbas being a civil war.  At one point, Voskoboinyk says that he had expected to find Russians fighting but instead saw “brother against brother”.

Former hostages and political prisoners have all given harrowing accounts of the methods used to extract such ‘confessions’.

Volodymyr Ovcharenko who was almost the same age as Voskoboinyk when seized in the so-called ‘Luhansk people’s republic’, says that during his first month in captivity, there were daily interrogations, beatings and degradation.  They also threatened to arrest or kill Ovcharenko’s parents.

In his case, he was beaten for long periods, with various items, and they also pulled out his fingernails.  He says that other guys also faced torture with electric shocks, or electricity which they clip to the most sensitive parts of the body.  He remembers that they once threw a young man into his cell whose body gave off the smell of burned meat.

The ferocious violence was not necessarily even because a prisoner held out, refusing to provide the required ‘confession’.  Ovcharenko, for example, recounts how the militants had decided that he was keeping SBU method guidebooks in his home and asked him where they were.  Since he was hearing the relevant word ‘metodichka’ for the first time, he answered truthfully that he didn’t know. One of his tormenters reacted by smashing a chair against his head.

Voskoboinyk’s fellow soldiers are clear that the young man was, at very least, under massive psychological pressure.  His speech is muddled and he looks exhausted.  They assume that he was either held for a very long time without sleep or physically tortured.

The story that this ‘confession’ produces is also implausible. On the one hand Voskoboinyk is supposed to have been captured in a state of inebriation, on the other – while carrying out a military task against the enemy.

A spokesperson for Voskoboinyk’s brigade categorically denied that the young man was carrying out any military task, and said that under no circumstances would they have taken a 19-year-old.  There are specially trained men for such tasks.

The so-called ‘DPR general prosecutor’s office announced on 3 October 2019 that “the sentence had come into force against a Ukrainian solder carrying out acts of sabotage on DPR territory”.   Given that it is in breach of the Geneva Convention on the treatment of prisoners of war to bring criminal charges against POWs for carrying out their service, it is noteworthy that many of the separate ‘charges’ against the young soldier pertain directly and solely to his military training and activities.