Imprisoned in Russia-backed Donetsk ‘republic’ for not abandoning her elderly motherNurse held prisoner for revealing the Russian soldiers Russia claims are not in UkraineFreed Donetsk religious scholar: Many in Donbas want a return to Ukraine but are afraid73 Ukrainian hostages welcomed home – over 160 still held in Donbas, Crimea & RussiaPutin ‘supports’ large-scale exchange of hostages held in DonbasUkrainian researcher savagely tortured for ‘confession to treason’ against Russian proxy ‘Donetsk republic’Silence abets Russia in torturing and risking the lives of Ukrainian hostages and POWs in occupied DonbasRussia’s Luhansk proxies ‘sentence’ two OSCE employees to 13 years on grotesque treason charges Russian proxy ‘Donetsk republic’ threatens foreign defenders of Ukraine will be executed, with families not told whenRussia abducts 25 volunteers delivering humanitarian aid to Mariupol, threatens to put them ‘on trial’ Russia kills Minsk Agreement, with lives of over 300 Ukrainian hostages and POWs in danger Russia is already holding many Ukrainian POWs without any declaration of warUkrainian seized and tortured by Donbas militants after returning for his elderly mother Ukrainian hostage tortured with screws through the knees by Russian-controlled Donbas militants On the pettiness of suspicion of Petro PoroshenkoDonbas militants seize Ukrainian teacher trying to help her ailing mother Mother with grave health issues imprisoned by Russian-controlled militants for trying to save her sonFears for the life of tortured Ukrainian hostage held by Russian-controlled Donbas militants Donbas militants threaten to kill Ukrainian hostage’s children if he doesn’t ‘confess’Nine former hostages to testify against ex-militant over torture at Donetsk Izolyatsia secret prison
• Topics / The right to liberty and security 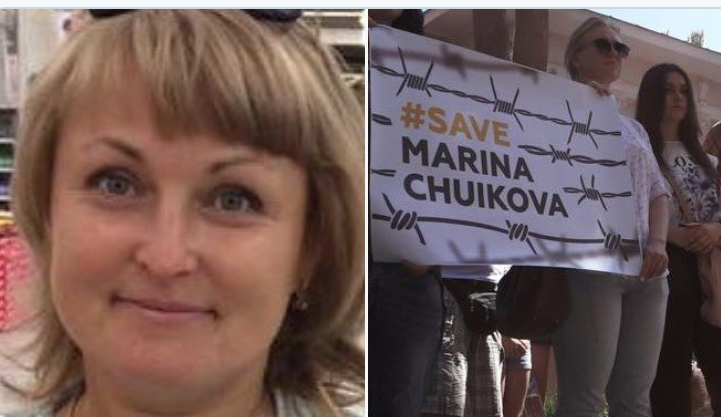 The self-proclaimed ‘Donetsk people’s republic’ [‘DPR’] has sentenced 48-year-old nurse Marina Chuikova to 11 years’ imprisonment on supposed ‘spying’ charges.  What, if anything, the charges amount to is unclear, but the manner in which the woman was effectively abducted back in March 2018, and the militants’ on-going secrecy about her whereabouts make scepticism warranted.

Chuikova sent her two sons, Artur and Savva, away from Horlivka as soon as the fighting began, but could not leave herself.  Her elderly mother was adamant that she would not leave the city she had lived in all her life, and in which her husband had died.  Chuikova had no choice but to remain with her mother, although she visited her sons who, by 2018, had completed their studies and were also active volunteers in Kharkiv.

It was initially believed that Chuikova had disappeared in Horlivka on 19 March 2018, two days after returning from Kharkiv, however more recent reports suggest that she was seized at the checkpoint returning to occupied territory on 17 March.  It is likely that the militants would have then brought Chuikova back to her home and searched it.   This would explain why her neighbours first informed her sons that they had seen her taken away by some men who had, seemingly, identified themselves as from the so-called ‘DPR ministry of state security’.  The young men have since been very actively campaigning for their mother’s release both within Ukraine and abroad.

Chuikova has been able to write to her sons, and reveals shocking conditions in the SIZO.  There are 15 women in the cell, which is unbearably stuff.  There is no shower and if they allowed to leave the cell, under guard, it is only for half an hour.

According to Artur Chuikov, representatives of international organizations have not once been allowed to see his mother, and the militants had previously even refused to confirm that she had been detained. He says that his mother has a chronic condition, yet has not received any medical care, and her health has generally deteriorated.

The self-styled ‘DPR supreme court’ has been reporting record numbers of ‘sentences’ against Ukrainians of up to 30 years over the last week or so, and it is possible that this is in preparation for an exchange of prisoners.  If not, then Chuikova will likely be moved to one of the prison colonies under militant control.

The DPR report claims that the ‘investigation established that in the middle of April 2016, Chuikova had agreed to work for Ukraine’s Security Service [SBU] and had “provided information of a military nature about servicemen from the DPR people’s militia, as well as photographing places where they were deployed. She had supposedly used the Internet to send this information to the SBU “for use against the security of DPR”.

It is typical of such DPR reports that it claims that the ‘sentence’ has already “come into legal force”, although there had been no earlier information at all.  This suggests, at very least, that the proceedings against Chuikova had little or nothing in common with a fair trial.

Chuikova’s sons even turned to the European Court of Human Rights and, according to Artur Chuikov, the Court ordered that his mother be released within three months, although this has, typically, been ignored by those holding her prisoner.