Flats for Treason in Russian-occupied CrimeaConflicting values and conflicting narratives: the case of Russia’s war on UkraineRussian prisoners offered big money and ‘amnesty’ to kill for Russia in Ukraine Covert mobilization and Ukrainian conscripts from occupied Crimea sent to die in Russia’s war against Ukraine Patterns of Resistance are changing. A Digest of Protests in Russia (17-24 June 2022) Disappearances in the Zaporizhzhia Region (24 February to 18 June 2022)Russia lavishly pays Wagner Unit mercenaries to bomb and kill Ukrainians ECHR rules too late against Russia’s notorious ‘foreign agent’ law and hardly moves over violations in occupied Crimea Russia extends terror and abductions from occupied Crimea and Donbas to all of Ukraine Prohibited remembrance of Crimean Tatar genocide and mounting terror in Russian occupied Crimea Crimean teacher dismissed and threatened with prosecution for telling students the truth about Russia’s war against UkraineEven in Russia, Putin’s ‘denazification’ claims prove no excuse for war against UkraineRussia ‘sentences’ Crimean Tatar leader Mustafa Dzhemilev for seeking to enter his native Crimea Chief Rabbi of Odesa: “Ukraine is the safest country in the world for Jews” Over 60 places of worship in Ukraine, as well as sites of cultural heritage, have been attacked by the Russian invaders, with some totally destroyedAlmost 400 Russian war crimes already documented in Ukraine Terror and abductions as Russia tries to break Ukrainian resistance in Kherson and other occupied citiesRussia has already greatly surpassed the Nazi Third Reich by insidiously launching missile and bomb attacks on UkraineUkrainian survivors of the Holocaust demand Putin and Russia get out of Ukraine Chief Rabbi of Ukraine demolishes Putin’s excuse for Russia’s invasion
• Topics / Human Rights Abuses in Russian-occupied Crimea 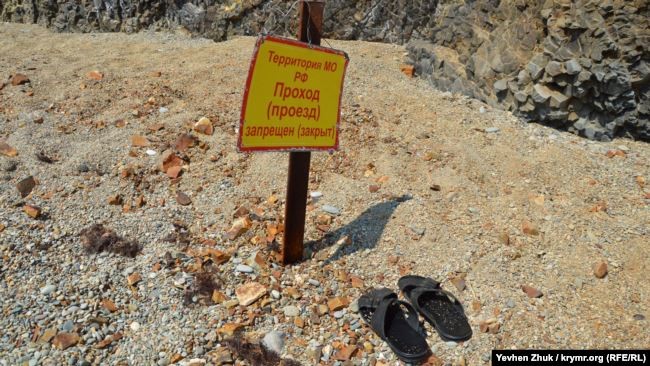 Russia’s lies in early 2014 were not about only its invasion and annexation of Crimea, but also about the plans it had for the occupied peninsula.  Five years later, Crimea is heavily militarized with even beaches in Sevastopol behind barbed wire.  Most of the areas are under the control of the Russian Defence Ministry, though at least one particularly scenic site under massive ‘reconstruction’ is owned by people close to Russian President Vladimir Putin.

Krym.Realii reports that an ever-increasing amount of the over 150 kilometres of shore surrounding Sevastopol is being handed over to the Russian military.  In some cases, the Russian Defence Ministry is fighting it out in court with the Sevastopol authorities. While it seems unlikely that Russian-controlled courts will stand up to the defence ministry, Krym.Realii spoke with at least one Sevastopol resident who said he was prepared to physically defend one area.  Despite the amount of shore, much of it is directly surrounded by steep cliffs, and the number of beaches, even without the appetite of the defence ministry and Putin’s cronies, would be limited.

The defence ministry’s representative has claimed in court that the beach in dispute is needed “for defence purposes”, although it has not explained what such purposes may be.  It is the ministry who approached the court, asserting that the land belongs to it, not to the city authorities. Local residents are convinced that the land is earmarked for holidaying defence and enforcement officials.  Since at least one beach has already been appropriated for precisely this purpose, this is not out of the question.

One of the most shocking aspects of this new land-grab is that the defence ministry has used barbed wire seemingly in the sea itself to block access to the particularly beautiful Yashma Beach.  There is barbed wire on land as well to keep people out of the best beach in the Lasla Bay.

One holidaymaker with a two-year old child is outraged. They should warn people, he says, that Crimea is now a military base.  They could put a sign on the Crimean Bridge (illegally connecting occupied Crimea to Russia),

It is noticeable that not one of the holidaymakers that the Krym.Realii journalists spoke with gave more than their first name, doubtless fearing that they could get into trouble for speaking out.  One of the Muscovites who had seen no problem in spending her holidays on illegally occupied territory was also indignant and will clearly not do so again.  “The prices have become higher, the service worse, and they’ve stopped given any consideration to individuals.  There isn’t a whiff of democracy”.

It seems that even local Sevastopol deputies have been unable to get any answer as to why the defence ministry is blocking off access to beaches.

It is certainly not only the defence ministry who’ve begun grabbing choice areas.  One such area, a castle at Cape Aya, was certainly out of bounds for ordinary Ukrainians when former Ukrainian President Viktor Yanukovych had his Crimean residence there.  Now, however, behind the fences, a huge amount of construction is underway

A local ‘deputy’ from the Russian-controlled Sevastopol parliament, Mykhail Chaly says that the beautiful natural landscape has been totally destroyed, presumably to build something for the elite.

Yanukovych’s ‘palace’ is owned by the firm belonging to Pavel Zaitsev, who, according to Municipal Scanner, has close ties to people around Putin – Nikolai Shamalov; Gennady Timchenko and Pyotr Kolbin.

This is not all.  In June 2019, a Crimean blogger who could only publish under a total pseudonym wrote that “another billionaire close to Putin is building a dacha in Batiliman [a clearing in Lasla Bay]; the Crimean deputy prime minister has taken over Soldatsky Beach in Sevastopol and the Russian military are not giving up an inch of the land by the sea”.

It has long been reported that Russia is using occupied Crimea as a huge military base, and probably has nuclear weapons located there.

In commentary for the European Council on Foreign Relations in April 2019, Gustav Gressel wrote that “While its current disposition in Crimea is mainly defensive in nature, Russia’s military build-up on the peninsula could soon turn the Black Sea region into a security black hole”.  He says that “Russian deployments in Crimea already include one reconnaissance brigade; two naval infantry brigades; one artillery brigade; one nuclear, chemical, and biological defence regiment; one coastal defence missile brigade; three fighter regiments; one helicopter regiment; and two air-defence missile regiments. Moscow is now working to deploy further air, sea, and land forces on the peninsula.”

Russia is also distributing illegally occupied land in Crimea to members of the Russian enforcement bodies and local traitors.  See: Flats for Treason in Russian-occupied Crimea