Russia’s oldest Ukrainian hostage gets 12-year sentence for “making Ukraine his priority”Two effective death sentences in Russia’s most savage attack on Crimean Tatar civic journalists and activists Imprisoned Crimean artist faces ‘terrorism’ charges for protesting Russia"s war against UkraineCrimean Tatar civic journalist sentenced to 11 years for refusing to collaborate with Russia"s FSB ‘My brother and weakened mother were left in the middle of the street’ — stories from IziumRussia violates its own laws in murderous reprisals against Crimean Tatar human rights movement Russia sentences Crimean Solidarity activist to 17 years for defending political prisoners Savage sentences against Crimean Tatar journalists for reporting on Russia’s ‘state terrorism’ in occupied Crimea Russia seeks 18-year sentence in conveyor belt ‘trial’ of Crimean Tatar Crimean Solidarity activist ‘My mom wanted to take poison, but she learned from a letter that we were alive.’ The story of a doctor from Mariupol, part 2She found out she was pregnant the day Russia invadedRussian court willing to kill 60-year-old Crimean Tatar political prisoner, heart attack or not Russian occupation means 14-year sentences for being Ukrainian and refusing to ‘confess’ to insane charges Look at this instead. Anti-war activities in Russia, 2-11 September 2022Crimean Tatar political prisoner sentenced to 11 years for "kitchen conversation" about religion and politics Russia releases convicted mass murderer to fight in Ukraine, then awards him ‘for bravery’ ‘In a panic, people abandoned their bed-ridden relatives.’ А resident of Mariupol story about how people were coerced to leave for RussiaRussia seeks 15-17 sentences against Crimean Tatar civic journalists who reported repression in occupied Crimea Savage sentences in Russia’s religious persecution and plunder in occupied Crimea “He lay on the sidewalk, naming towns and cities in Ukraine”. A digest of anti-war activities in Russia, 23-29 July
• Topics / The right to liberty and security 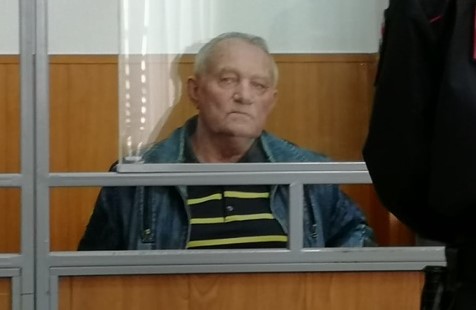 72-year-old Vladimir Morgunov has been jailed for 12 years by the Rostov Regional Court in Russia on charges of spying for Ukraine.  Although the trial was held behind closed doors, it is known that he was accused of informing Ukraine about the deployment of military technology and men near the border with Ukraine.  This is undoubtedly information Russia has every reason to keep secret given that most of the military hardware, ammunition and men are sent across the border to the Russian / Russian-controlled ‘republics’.  There is also ample evidence that Russia has carried out shelling of Ukrainian targets from positions in the Rostov oblast.

Morgunov was born in the Luhansk oblast, but moved to Chertkovo, a town on the Russian side of the border with Ukraine after the collapse of the Soviet Union in 1991.  Kommersant reports that he has a higher education, and for most of his working life held managerial posts in the municipal authorities.  His two children are adults and he himself was retired and engaged in civic work.

Morgunov was arrested in November 2018.  The FSB assert that during their search of his home, they found 10 telephone boxes; sim-cards; as well as Ukrainian and Russian passports in his name.  He is alleged to have passed on information to a member of the Ukrainian Security Service on Ukrainian territory.  During these meetings, Morgunov supposedly passed on information “about the economic and socio-political situation in the region, as well as about the deployment of military technology in the border region, and about men and means deployed in ensuring the protection of the Russian state border. “.

It is claimed that Morgunov agreed to admit guilt faced with the weight of evidence against him. With so little information, it is hard to say with certainty, but in essentially all cases involving Ukrainians since 2014, including that of pensioner Yuri Soloshenko, the men have either been tortured into providing such confessions or (as in Soloshenko’s case), deprived of an independent lawyer and placed under heavy and constant psychological pressure.

He allegedly opted for a special procedure, although all this means is that the court essentially sat to hear the charges and to pass sentence, with little or no examination of the evidence. The local Rostov Gazeta, among others, reports that the prosecutor had demanded an 8-year sentence, which may be linked to age (Soloshenko’s sentence was also effectively until he was 80) or to a promise given in exchange for a guilty plea.  If the latter, then Morgunov was grievously deceived, since the actual sentence was three years longer.  11 years in a Russian harsh regime prison colony for a man of Morgunov’s age is essentially a death sentence and the priority now must to be get him on the list of prisoners to be exchanged.

During interrogation, Morgunov reportedly said that he had acted solely on the basis of patriotism.  This can be understand in different ways.  The unnamed law enforcement officer whom Kommersant cited explained such a patriotic motive as meaning that “he was very negative about the current regime in Russia and tried in this way to fight it”.  This explanation would not explain his Ukrainian passport.

The same source stated that the specific charges against Morgunov related to 2018 but that there “were suggestions” that he might have been providing information since the first decade of the 21st century.  What such suggestions are based on is unclear, but Russia might well have an interest in blurring the timeframe given the consistently denied, although undeniable uses that Moscow has made of the Rostov oblast for its aggression against Ukraine since 2014.

Morgunov’s town, Chertkovo, is near part of the Ukrainian – Russian border which remains under Ukrainian government control, however part of the Rostov oblast is near the border which has been controlled by Russian and Russian-controlled militants since 2014. Many of the soldiers and mercenaries who are known to have been sent to Donbas to fight against the Ukrainian Armed Forces have had training in the Rostov oblast.  It is also through this oblast that military technology, arms and men have been sent to Donbas since the initial seizure of Sloviansk in April 2014 by Russian ‘former’ military intelligence officer Igor Girkin and other highly-trained fighters,   Since August 2018, for example, the OSCE’s Special Monitoring Mission has reported numerous sightings of Russian military trucks, sometimes visibly carrying military equipment, travelling by night on dirt roads near the border, although in places where there is no official border crossing (see: Russia brings ‘humanitarian’ convoys to Ukraine by day, military trucks carrying death by night  )