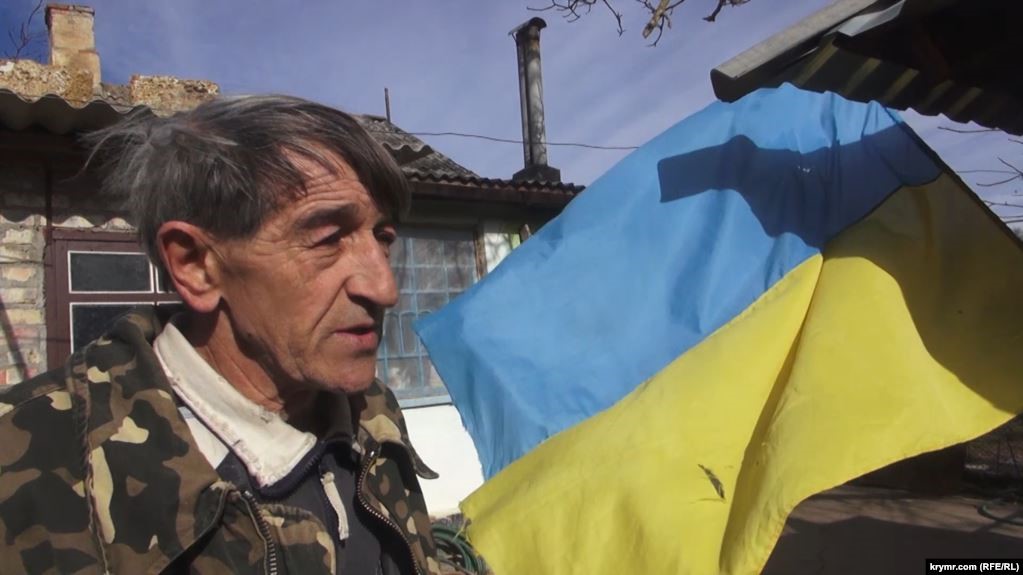 “Why should I leave?  I am on my land”, 61-year-old Ukrainian activist Oleh Prykhodko asked after the Russian FSB’s last search by armed and masked men of his home in Orekhovo, near Saki in occupied Crimea on 8 February 2019.  The FSB have now returned, and this time arrested Prykhodko, detaining also his wife, who is, however, being treated as a ‘witness’.  Everything about this case  is disturbingly reminiscent of Russia’s political trial of Volodymyr Balukh, from the Ukrainian flag over Prykhodko’s home and the evident attempts to terrorize him into leaving Crimea himself to the concocted charges when he refused to be cowered.

Prykhodko was arrested in the evening of 9 October. According to his lawyer, Nazim Sheikhmambetov, the FSB accuse him of ‘unlawfully preparing an explosive device’ (Article 223.1 of Russia’s criminal code) and, most ominously, of ‘a terrorist act’ (Article 205).  The FSB is now claiming that he was planning to blow up the Saki city administration.

According to Sheikhmambetov, the FSB turned up in the evening of 9 October and carried out “an inspection” (as opposed to a search which requires a court order) of Prykhodko’s garage.  They allegedly ‘found’ a TNT type 200 explosive, a detonator for UZRGM-2 and such cut welding arcs allegedly for insertion within the explosive device.  The FSB’s highly improbable story is that Prykhodko was planning to blow up the local administration building, but that the FSB prevented this .

Prykhodko is adamant that the supposedly found items were, in fact, planted and that this is because of his pro-Ukrainian position.

All of the elements linking Prykhodko’s arrest to other politically-motivated cases since Russia’s annexation of Crimea are present, including the publicity provided by Russian and pro-Russian propaganda channels.  On 10 October, Kryminform broadcast a video released by the FSB of what the channel called “the arrest of an extremist in Saki”.   The video footage, in fact, incriminates the FSB since it is clear that they are alone in the garage with Prykhodko forced to stand outside watching from a distance.   It is reported that they allegedly found several Molotov cocktails hidden in an old bucket, as well as a homemade explosive device.

Lest any of their audience not understand what kind of ‘extremist’ had been targeted, Kryminform reports that they also found symbols of “extremist organizations banned in Russia”, books, brochures and a portrait of the Ukrainian nationalist Stepan Bandera.   Unlike the ‘explosives’, the Ukrainian flag, trident and various other Ukrainian symbols, books, etc. were, indeed, Prykhodko’s.  All were, however, present back in February 2019 when the FSB first carried out an armed search. Although Kryminform, probably quoting information received from the FSB, mentions Prykhodko’s Ukrainian flags and his opposition (described as “extremist views”) to Russia’s occupation of Crimea, these are not illegal.  They are, however, clear indicators of the political motivation behind this new arrest in occupied Crimea.

Like Volodymyr Balukh, Prykhodko has never concealed his opposition to Russia’s invasion and annexation of his homeland.  Neither he, nor his wife, were in any doubt about the danger of persecution he faced making it simply preposterous to suggest that, even if he wanted to commit a terrorist act, that he would have placed evidence in his garage for the entirely predictable visitation by the FSB.

It was, after all, not the first time.  Prykhodko was once, in 2016, jailed for three days for not changing the Ukrainian number on his car to a Russian one.

Then on 8 February 2019, around 10 FSB officers, some in masks, carried out a search of the Prykhodko home and removed computers, a telephone; books and some German realia, linked with his interest in the history of the Second World War (a German helmet and some models (cases) of German machine guns. They also insisted on searching the home of his daughter.

After that search, the FSB took away a red and black flag (of the UPA, or Ukrainian Insurgent Army) and Ukrainian flag; Ukrainian and Crimean Tatar symbols and old leaflets, including from the VO Svoboda Party which Prykhodko was a member of until 2014.  Prykhodko said then that they had ripped off the Ukrainian symbols from his car.   Following the search, he was taken to the FSB office in Simferopol and interrogated.  They wanted to know about his activities and about virtually every contact whom he had in his mobile phone.

Moscow probably understands that its arrests of pensioners and others known for their pro-Ukrainian views and law-abiding behaviour cannot even convince an audience fed exclusively on propaganda.  The visitation in February was clearly intended as a warning, one that Prykhodko, who is in his Ukrainian homeland, refused to heed. He is now in detention, with ‘judge’ Anton Tsykurenko from the Russian-controlled ‘Kievsky District Court in Simferopol having remanded him in custody for the next two months.