Outrage as Crimean collaborators included in Russian delegation to Turkey 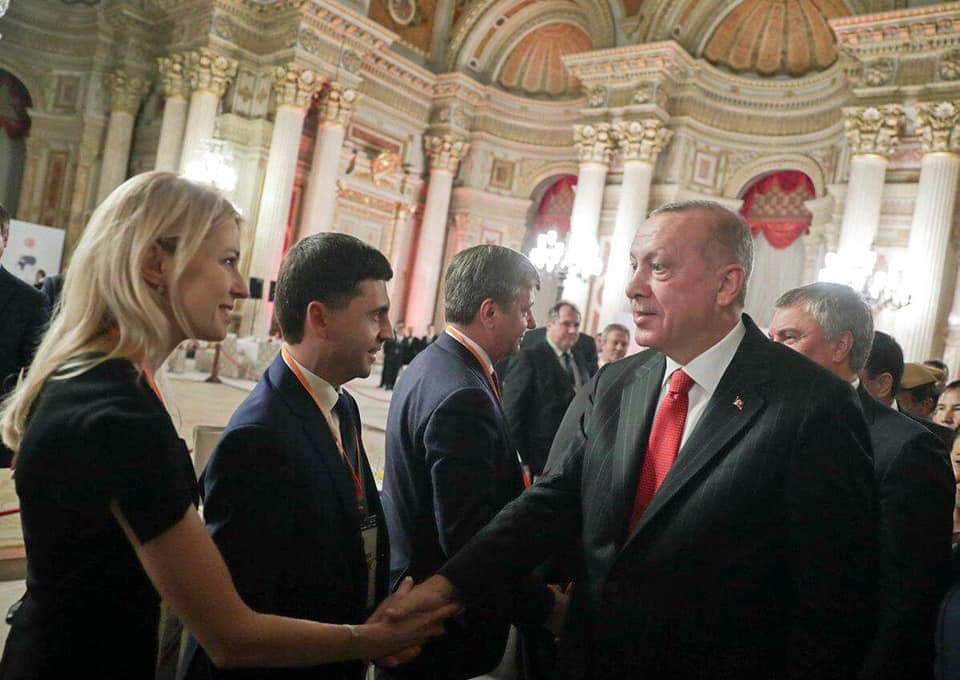 Two Crimean collaborators, including Natalya Poklonskaya, who played a direct role in the persecution of numerous Crimean Tatar and other Ukrainian political prisoners, have been allowed to take part in an official Russian delegation to Turkey.  The visit, reported triumphantly in Russian state-controlled media, has provoked protest from Ukraine’s Foreign Ministry, the World Congress of Crimean Tatars and the Head of the Mejlis of the Crimean Tatar people, Refat Chubarov.  As de facto prosecutor general for the regime that Russia installed at gunpoint in February -March 2014, Poklonskaya was complicit, first in the banning of veteran Crimean Tatar leader Mustafa Dzhemilev and Chubarov from their homeland, then in Russia’s extraordinary ban of the Mejlis, or self-governing body of the main indigenous people of Crimea.  Given her role in Russia’s use of spurious ‘terrorism’ and ‘extremism’ charges as a weapon of persecution in occupied Crimea, it is particularly offensive that she and fellow collaborator, Ruslan Balbek should have participated in a conference of parliamentary speakers ‘on countering terrorism and strengthening regional interaction’.

Although the photo Poklonskaya posted on social media of herself, Balbek and others with Turkish President Recep Tayyip Erdoğan almost certainly signified no more than the customary handshake required by etiquette, this is, nonetheless, a worrying development.  Turkey has a large Crimean Tatar diaspora, and it was almost certainly with Erdoğan’s help that Moscow freed Crimean Tatar Mejlis leaders and political prisoners Akhtem Chiygoz and Ilmi Umerov in October 2017  Typically, Russia is believed to have released them in exchange for two Russian state killers accused of killing a Chechen living in exile.  At a press conference with Ukrainian President Volodymyr Zelensky on 8 August this year, Erdoğan declared his country’s respect for Ukraine’s independence and refusal to recognize Russia’s annexation of Crimea, and also promised to defend the rights and national identity of Crimean Tatars who have particularly suffered persecution under Russian occupation.  There is nothing to suggest that this official position has changed, however this was the first time that Turkey has allowed Crimean delegates to take part in an official delegation.  Since both Poklonskaya and Balbek gained notoriety for their collaboration under Russian occupation, and both were ‘elected’ to Russia’s State Duma through illegal and internationally condemned ‘elections’, it is inconceivable that Ankara did not know of their participation.

It is unacceptable that any Crimeans should be allowed to take part in a Russian delegation, but the fact that the two ‘delegates’ were Balbek and Poklonskaya, seems a particular slap in the face for Crimean Tatar and other Ukrainian victims of persecution and their families.  Balbek’s role, as one of the few Crimean Tatars who chose to collaborate with the Russian occupiers of Crimea has largely been in propaganda and denial of the gross human rights violations and mounting number of political prisoners.   As mentioned, Poklonskaya’s role as de facto prosecutor was even more malignant.  It is largely due to her that two Maidan activists – Oleksandr Kostenko and Andriy Kolomiyets – were arrested, tortured and prosecuted on totally surreal charges relating to unprovable incidents during Euromaidan.  Kolomiyets is still serving a 10-year sentence.

Even if it was on the orders of the Kremlin or the FSB, Poklonskaya still bears direct  responsibility for the persecution of members of the Mejlis, of participants in the pre-invasion demonstration that prevented Russia from carrying out a coup without the use of soldiers and of Crimean Muslims on fatally flawed ‘terrorism’ or ‘extremism’ charges.  She held the top prosecutor’s post in occupied Crimea and answers for the total failure to bring the savage killers of Reshat Ametov to justice, and to investigate the disappearances and likely murder of civic activists and young Crimean Tatar men, the youngest of whom, Islyam Dzhepparov, was just 19.  She bears moral and practical responsibility for the obstruction to any attempts to investigate the brazen abduction on 24 May 2016 of Ervin Ibragimov, a well-known Crimean Tatar activist and member of the World Congress of Crimean Tatars.  Ibragimov’s family and friends found video footage showing the abductors who appear to be in traffic police uniform, yet no attempt was made to carry out a real investigation. Instead, during a visit by pro-Russian French politicians to occupied Crimea, Poklonskaya claimed that the video footage could have been ‘provocation’, and that Ibragimov had been seen by witnesses a month later.  This while Ervin’s parents were going through hell, not knowing whether their son was alive.

This was the sort of person whom Russia used to impose methods of terror and persecution in occupied Crimea and whom it is now sending on delegations to discuss ‘fighting terrorism’   Erdoğan’s own track record is dire, however it is still deeply frustrating that for his own political ends, presumably linked with Moscow, he took part in Russia’s latest attempt to legitimize its invasion and illegal occupation of Crimea.