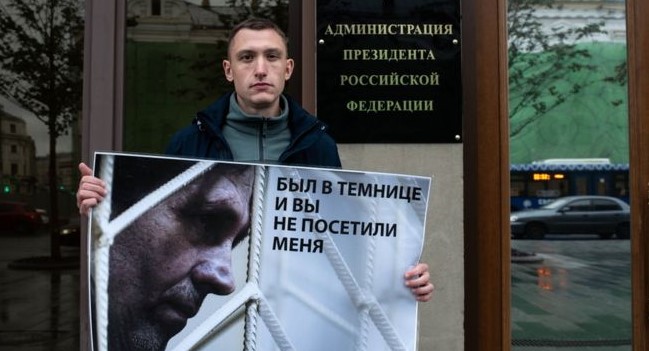 The Moscow City Court has upheld a four year sentence against 34-year-old Konstantin Kotov, a Russian computer programmer  and tireless defender of Crimean Tatar and other Ukrainian political prisoners.  Russia has thus reinstated the most notorious of its anti-protest norms, and demonstrated that even a Constitutional Court ruling can be applied or discarded as those in power require.  It seems typical that both men whom Russia has imprisoned under this norm for totally peaceful protests have been known for their opposition to Russia’s aggression against Ukraine and support for the Kremlin’s Ukraine hostages.  In Kotov’s case, he was also very active in bringing material aid, as well as moral support, to the 24 Ukrainian POWs whom Russia illegally imprisoned for almost nine months and Crimean Tatars jailed for coming out in defence of political prisoners.

The norm in question, Article 212.1 of Russia’s criminal code was introduced in July 2014.  It allows for criminal proceedings and a sentence of up to 5 years if a court has issued three rulings on administrative offences within 180 days.  Since it is absolutely standard for even peaceful protesters holding a single-person picket to end up detained and facing administrative prosecution. It is easy to bring criminal charges against a large number of civic activists essentially just because they had taken part in protests.  The norm was widely criticized as unconstitutional from the outset, and seen as part of the offensive against civil society.

The first three-year prison sentence was passed on Ildar Dadin in December 2015.  Dadin was a well-known civic activist and his imprisonment, then his torture and added punishment received widespread publicity.  He appealed to the Constitutional Court, challenging the law itself, rather than its application in his case.

The Court decided in a very long judgement on 10 February 2017 that the article did not breach Russia’s Constitution, but it did recommend some amendments and that Dadin’s case be reviewed.

The speed with which the Supreme Court acted, and the lack of any real concern for the Constitutional Court judgement seem to confirm the suspicion back in February 2017 that the decision to release Dadin had come from the Kremlin, not from allegedly independent courts.

There was, at least, some respite from these prosecutions, however that changed early in 2019, presumably as more and more Russians began taking part in peaceful demonstrations. OVDinfo earlier reported that three people had been charged under 212.1 in 2019, however Kotov’s case was different from the outset.  He was the first person charged under 212.1 to be taken into custody immediately following his arrest on 12 August 2019.   The ‘trial’ was also suspiciously quick, with judge Stanislav Minin from the Tverskoy District Court sentencing him to four years’ imprisonment less than a month later, on 5 September.

The episodes used to justify criminal prosecution and imprisonment in Kotov’s case were:  a protest on 2 March in support for arrested student Azat Miftakhov; his detention and 5 day arrest on 13 May after a meeting in defence of political prisoners) outside the FSB buildings on Lubyanka; his detention and fine on 12 June at a protest in support of Meduza journalist Ivan Golunov.  He was then prosecuted for merely posting a call on Facebook to come out in protest at the Moscow authorities’ blocking of real opposition candidates for the coming city council ‘elections’.  He was detained on 24 July as he left his apartment block, and arrested for 10 days, and then again on 10 August after a protest on Sakharov Avenue.

During both that first ‘trial’ and the appeal hearing on 14 October, the prosecution pulled out all kinds of questionable assertions from enforcement officers.  Police officer Nikolai Kurazh claimed, for example,that, while being detained in March, Kotov had tried to dig his feet in and shouted.  He further asserted that they had had to detain Kotov as he was preventing Chinese tourists from taking photographs of themselves in front of the monument.  Kotov’s lawyer asked for permission to show a video of the protest, saying that there were no Chinese tourists to be seen.  This was clearly important given the officer’s claim, yet the judge refused permission, as he did the applications for a number of defence witnesses to be called.

He has been recognized as a political prisoner by the Memorial Human Rights Centre and Amnesty International has called the verdict in Kotov’s ‘trial’ a verdict on human rights in Russia.

Kotov was not allowed to be physically present in the court on 14 October, and was forced to take part by video link from the prison.  Mediazona reports that he was represented in court by 12 lawyers, each taking a symbolic (and, in monetary terms, nominal) fee of 212 roubles and 10 kopecks.

On 13 and 14 October there were a number of civic demonstrations in defence of Kotov, with at least two participants themselves detained. There were also a huge number of people waiting in hope of attending the hearing on Monday.

The defence was very strong, as were their arguments, yet judge Nina Sharapova was clearly not prepared to act in accordance with her oath and rejected the appeal.

The case will eventually end up at the European Court of Human Rights with the Court in Strasbourg near certain to find that Kotov’s rights have been gravely violated.