Volodymyr Pavliv, my brother, died on the frontline in eastern Ukraine in 2017. He served in the Ukrainian Armed Forces for almost two years before he was killed by shrapnel near Popasna, Luhansk region. 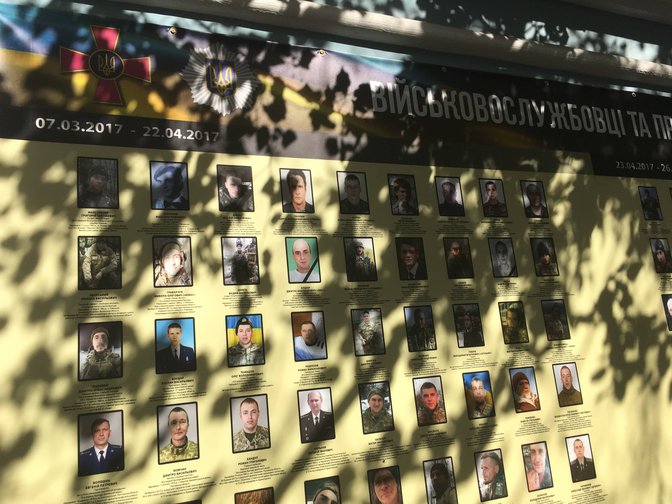 Following his death, a number of obituaries were published in the local and national Ukrainian media. Not all of the information that they presented was accurate, and it felt as if that accuracy was not their primary aim: they seemed to have been constructed to justify my brother’s death, rather than remember his life.

The war in eastern Ukraine has already claimed thousands of lives. The overall death toll, including civilian losses, is estimated at over 13,000. According to official Ukrainian statistics, as of April 2019, 2,973 members of the Ukrainian military have been killed as a result of the war.

On 14 October, Ukraine celebrates a national holiday, the Day of the Defender of Ukraine, which is an opportunity for politicians from most sides to praise the heroism of those who risked and lost their lives in this war. Yet political speeches, similarly to official obituaries, very rarely reveal the reality of life and death in war.

You can learn many things from obituaries. Even things that didn’t happen. These are always the most interesting things, of course. People who write obituaries must feel pressure to make the subjects of their texts as exciting and important as possible. But let’s face it, few of us are particularly exciting. Even fewer are important. So, the writers’ only choice is to make things up. Or to put it kindly, to embellish.

Obituaries for those who die on the battlefield seem to follow the same template. The first paragraph gives basic facts: so-and-so served in such and such unit, was of such and such age when he/she died in such and such place while fulfilling the duty of defending the homeland. The second paragraph is about how human the fallen soldier was. It’s supposed to get us to identify with him/her. It could be a quote from a relative or a friend. “He was a talented artist”, “She had three little children” - it’s usually the kids that are mentioned when it’s a woman who died, not her occupation.

“He loved his native city”. That was how most of my brother’s obituaries began. It’s true, he really did like Lviv a lot. He couldn’t understand why I didn’t want to move back there, to western Ukraine. I explained that I felt like I grew out of it, like one grows out of one’s favourite clothes: you still love them and don’t want to give them up, but you can’t wear them anymore. I explained that the Lviv of our childhood was not the Lviv of today. He saw it differently. I guess, for him, Lviv was whatever he made of it in his head.

Like me, for many years my brother lived away from Lviv. Mostly in the Netherlands, but, for some reason, the obituaries said that he had lived in Belgium. It only takes the first reporter to make a mistake for all the others to reprint it. Fact-checking did not seem to be terribly important for these obituary writers, so they moved my brother from the Netherlands to Belgium. But what difference does it make if it’s one western European country or another? To most people reading those obituaries, Belgium or the Netherlands stood for the same thing: the West, prosperous life, no war, no need to go to war.

Western Europe was a perfect setting for the third paragraph, the one about the heroic decision to go to the front. You need to have something to leave behind in order for your decision to join the army to be heroic: if you have nothing important to leave - little kids, a fancy job, a cosy life in western Europe - then you have nothing to lose. You may as well go to the front. Nothing heroic about that. So, the third paragraph in my brother’s obituary was as follows:

“For a lengthy period of time, he lived abroad - in England and Belgium. Although he had a good job abroad, he was not afraid to return to his Motherland and go to fight in the East as soon as he could. Because every one of us should take responsibility for the future of our country.”

Or something along those lines.

Now, pathos aside, this would be a fitting paragraph for an obituary. The only problem with it was that almost none of it is accurate.

First, as we’ve already established, he lived in the Netherlands. He visited the UK twice. (I don’t even know if he ever went to Belgium.) Second, he didn’t have a good job in the West. Few immigrants do. Unless your concept of a good job is getting minimum wage on a precarious contract, because there’s a queue of other immigrants ready to replace you, cycling 20km to work because you want to save on travel and regularly hearing xenophobic abuse from your employer because… Well, I don’t know why people feel compelled to say xenophobic things to immigrants who work for them, but they do. Maybe it’s because it makes them feel superior, better. But if you leave a job like that, or if, God forbid, you don’t have any job at all before you sign up for army service, or if, even more frightening to think, you join up because you don’t have any job and army service is a way of earning a living, that’s not going to look good in your obituary.

Third, my brother didn’t return to Ukraine to defend his Motherland. He might have done if he had still been living abroad when the war started, but he had come back a few years earlier. Why? Why do many immigrants come back? Because they get fed up with the life of an immigrant. Because, for many of them, nothing holds them abroad. Because while they are away, they imagine the country of their youth to be exactly what they want it to be, regardless of what it actually is. Because of millions of very ordinary reasons that have nothing to do with defence of the homeland or heroism.

And, finally, he didn’t sign up as soon as the war began. For some reason, his draft notice did not arrive, although he’d been expecting it to. He thought about his decision for some time - which is only a reasonable thing to do when the decision has a potentially lethal outcome - and, eventually, signed up for the frontline voluntarily. He put his old army uniform on - the one he wore when he served as a conscript in the 1990s and kept as a souvenir - turned up to the local military office, from which he had been drafted as a young man, and reported that he wished to go to the frontline. I learned all this from the people in the military office much later. My brother seemed to have made quite an impression on them: they all remembered this scene and relayed it to my mother and me enthusiastically when we came to collect a medal for courage that he had been awarded posthumously.

So, there you have it: one short paragraph and at least four inaccuracies. The obituaries painted a very unambiguous picture of a successful man in his prime who dropped everything and rushed to give up his life for his native land. I guess I should have felt proud reading it. The only problem was that I didn’t recognise my brother in this description. It’s not that he wasn’t brave or didn’t care about his homeland. He was and he did. It’s just that things were much more prosaic. And if I didn’t recognise him in this description, if he didn’t live up to it (or didn’t die up to it?) did that mean that I was not to feel proud of the real him because his actual story didn’t fit the heroic template?

Oh yes, the template. There is often some room for the description of heroic death. Because the loss of a soldier’s life has to be described as heroic - not as a tragic mistake, an accident, a disaster, but as an act of selfless heroism. The thing is, there is often little that is heroic about dying at the frontline. In his short story “My Testament”, film director Oleg Sentsov got the difference between a romanticised death and the real thing spot on:

“There was once a man who was asked how he would like to die, and he answered: ‘With a shout of hurrah! on my lips, a gun slung over my shoulder, and a mouth full of blood.’ I’d also like that - it’s beautiful, it’s manly. But that’s not how it works. Heroes die beautifully only in movies and books. In real life, they piss blood into their pants, scream from pain, and remember their mothers.”

My brother’s friend, the last person to talk to him on the phone, said that the last thing he heard him say was “Suka! Blyad!”, which can be loosely translated as “Shit! Fuck!” They had been planning my brother’s leave, coming up in a couple of days’ time, and then he heard some blasts in the background and my brother shouting before the connection was lost. Not something for an obituary, right? Something for life, something for death, but not for an obituary.

If reality doesn’t make it into obituaries then what does? Are these inaccuracies just embellishments or do we choose to lie about people to make them seem “better”? To make them interesting and important? Whose life do we consider to be important, and whose dispensable to the point that it’s not worthy of an obituary?

Thousands of lives have already been lost in the war in eastern Ukraine. All that is left of them is memory. But what sort of memory do we create for them as a society? Do we feel the responsibility for our little white lies? Do we realise that another serviceman reading an embellished obituary and realising that his life is nothing like the one described there might think himself worthless? Do we notice when a servicewoman who died a “heroic” death on the battlefield is praised on the national news for foregoing motherhood and risking her life for her homeland, yet one who was killed by her fellow soldier out of jealousy is reduced to angry posts on social media and criticised for neglecting her motherhood? Do we consider what it must be like for relatives to read an obituary and not really recognise their loved ones behind all the embellishments? It doesn’t help in the process of grieving.

I dread to think what would be written in my own obituary. But I’ve not left my life in western Europe to defend my homeland, so, perhaps, I wouldn’t be deemed worthy of an obituary at all. Perhaps, that’s just as well.