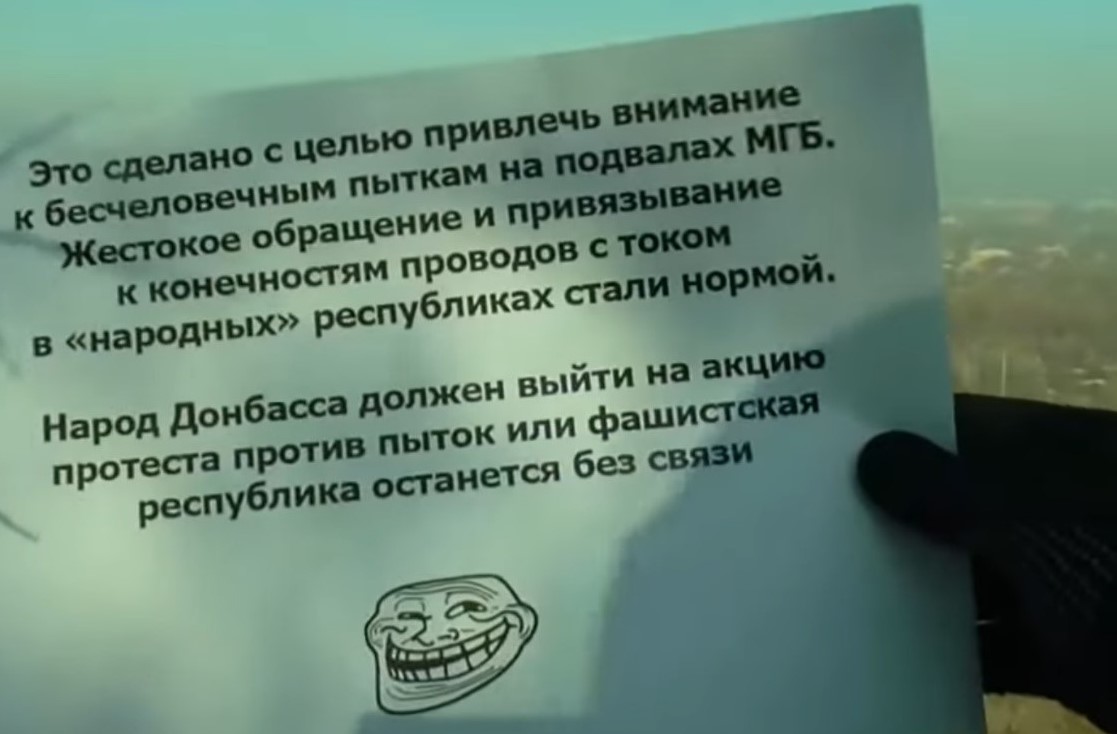 A radio tower servicing the Fenix mobile operator was blown up on 27 October, with a video of the blast soon afterwards posted on YouTube, together with an ultimatum.  It appears that those who planted the explosive device did it in protest at the widespread use of torture and ill-treatment in the self-proclaimed ‘Donetsk people’s republic’s’ illegal prisons.

While the authenticity of the video clip cannot be confirmed, it was very clearly posted soon after the reports of a major explosion.  This very clearly articulated motive was given stony silence in the reports of the ‘sabotage’ from the DPR militants and Russian state-controlled media, but those who posted the video have undoubtedly taken a great risk.

We know enough from former hostages like Ihor Kozlovskyy and Dmytro Potekhin to be in no doubt that the use of torture and ill-treatment in the so-called Donetsk and Luhansk people’s republics’ is as bad as the ultimatum states.

In ‘DPR’ there is particular concern over conditions at Izolyatsia, a former factory in Donetsk on territory of around 60 hectares which was a vibrant arts and educational centre until June 2014 when seized by the Russian-backed militants led by Roman Lyahin.

They reportedly put a sniper in place, and turned the territory into a secret prison of the so-called ‘DPR MGB [ministry of state security]’ .  Its existence is denied by the militants themselves, and no international organizations have been allowed into it, however there is considerable evidence of its existence, including the invaluable testimony provided by Dmytro Potekhin who was seized by the militants and held at Izolyatsia in August 2014.  A well-known journalist and civic activist, he had deliberately gone to Donetsk without accreditation as he knew that journalists would, like in Soviet times, get their own ‘guard’ and be much more restricted in what they got to see. He had already heard rumours of secret concentration camps and knew that accredited journalists would not get to see them.  He managed to spend one day in Donetsk before he was seized and did indeed spend 48 days at Izolyatsia. Since his release, he has provided the SBU with a rough map of the territory, marking out, for example, places of forced labour.

He points out that, unlike SIZO, the basements at Izolyatsia were never designed for holding prisoners which means there is no running water in the rooms used as cells.  This provides extra leverage and scope for torture since the militants can also deprive or threaten to deprive hostages of water.

The militants understood fairly rapidly that Potekhin’s disappearance had been widely reported abroad, and that they could not afford to kill him.  Although because of his somewhat protected position, he only experience small degrees of physical violence, he has been able to provide detailed accounts of the forced labour, the use of mock executions, and other such methods used at Izolyatsia, which he stresses is just one of several such concentration camps.

Donbas militants ‘sentence’ journalist Stanislav Aseyev to 15 years for ‘spying’ & ‘extremism’  Aseyev, imprisoned since May 2017 for his truthful reports about life in DPR is also believed to have been held at Izolyatsia.