Ukrainian gets suspended sentence for T-shirt with Soviet symbol 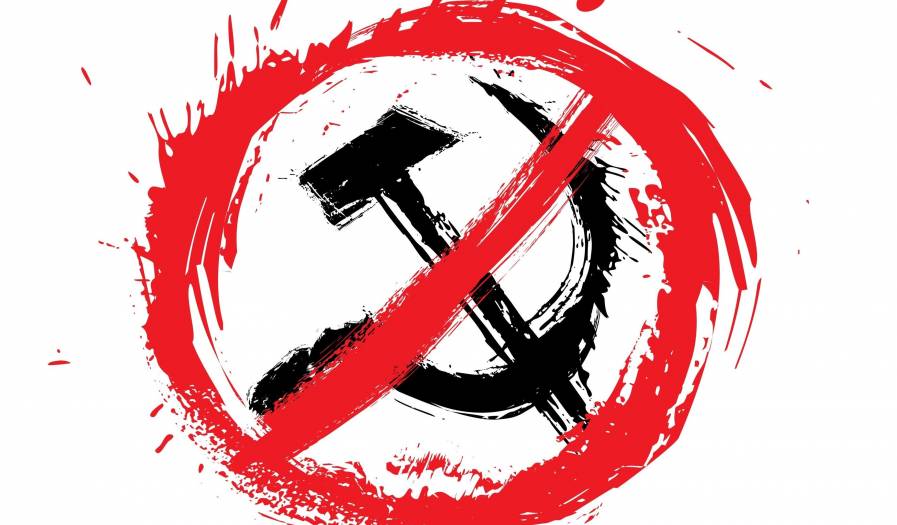 A court in Kryvy Rih has found a local resident ‘guilty’ of wearing a T-shirt with the state symbol of the USSR (containing the hammer and sickle in a 5-pointed star) in a public place.  This is the second known criminal conviction made possible by a highly controversial law on decommunization, however there may have been more that have not been reported.

The 11 October ruling was, somewhat ironically, handed down by judge Natalya Litvinenko from the Dzherzynsky District Court, with the district (and court) still bearing the name of the notorious founder of the Soviet secret police or ‘Cheka’, Felix Dzherzhynsky.

The unidentified defendant is said to have been in the Plaza shopping centre in Kryvy Rih from around 11.00 to 17.00 on 14 June, wearing the offending T-shirt. This was red, with the Soviet state symbol on the front, and was found by the judge to fall under Article 436-1 of Ukraine’s Criminal Code, namely, the public use of symbols of the communist totalitarian regime, and Article 4 of the Law on the Condemnation of the Communist and National Socialist (Nazi) Regimes and Prohibition of Propaganda of their Symbols [hereafter the Law], which came into force in May 2015.

During the preliminary hearing, the court was informed that the defendant and prosecution had reached an agreement and that the defendant was pleading guilty.  He in turn received a one year suspended restricted liberty sentence with a one-year probation term..  Although the ruling is in principle subject to appeal, one aspect of such an agreement is that the parties waive their right to challenge the sentence.  Since the defendant could presumably not deny that he wore the T-shirt, it is understandable that he should have sought such an agreement rather than face a harsher sentence, but it does almost certainly mean that he cannot apply to the European Court of Human Rights which might well find in his favour.

The same unfortunately applies to the first criminal conviction under the same decommunization law from May 2017.  There too, the defendant, a third-year Lviv university student, agreed to admit guilt and received a two and a half-year suspended sentence with a one-year probation period.  The charges in his case, under the same Article 436-1, were over photos and other material with communist symbols, posted on Facebook.  t

That ruling from the Halytsky District Court in Lviv stated that a linguistic assessment had concluded that there was “propaganda of elements of communist ideology which constitutes circulation of tendentious information aimed at idealising and popularizing communist ideology, and in the public use of products with symbols of the communist regime, including publications on Vladimir Lenin, a person who held a leading role in the highest bodies of power in the USSR, his philosophical-political quotes, as well as common communist slogans: “Lenin lived, Lenin is alive and will live on”;  “The plan is the law; fulfilment is our duty; over-fulfilment is an honour!”.

In both these cases, the person charged may have feared a real sentence if they did not cooperate with the investigators, however they still have received criminal convictions over a law which has been very strongly criticized by the Council of Europe’s Venice Commission and which seems likely to be slammed by the European Court of Human Rights.  This could be over the decommunization law’s use as the reason for banning Ukraine’s Communist Party in December 2015, or detentions and / or protocols drawn up over the use of communist symbols during Victory Day events.

The joint interim opinion issued on the Law by the Venice Commission and the OSCE Office for Democratic Institutions and Human Rights (OSCE/ODIHR) from 21 December, 2016, was extremely negative. It found that the Law had serious failings which could infringe people’s right to freedom of expression and of association.

The Law prohibits the creation and orders the forced termination of any legal entity propagating communist and / or Nazi regimes, or that uses their symbols. It also criminalizes propaganda of such regimes, with this understood as referring to one of the following:

The constitutional experts were careful to stress that the Law has a legitimate aim, and that Ukraine has the right “to ban or even criminalise the use of certain symbols of and propaganda for totalitarian regimes”.  However,  the experts said, the Law is too broad in scope and introduces excessive sanctions, while its provisions “are not precise enough to enable individuals to regulate their conduct according to the law and to prevent arbitrary interference by public authorities.”  It recommended the use of a less extensive and exhaustive list of symbols; a clear definition of the term ‘propaganda’, and, importantly, stressed that:

"Only those acts that constitute an actual danger to society should entail criminal responsibility, which should be proportionate to the seriousness of the offence committed. A mere display of a symbol or use of a name should not result in imprisonment.”

It seems inconceivable that they, or judges at the Court in Strasbourg, would find a one-year restriction of liberty sentence, whether suspended or not, a reasonable penalty for wearing a T-shirt, however offensive for many of us are any Soviet symbols.