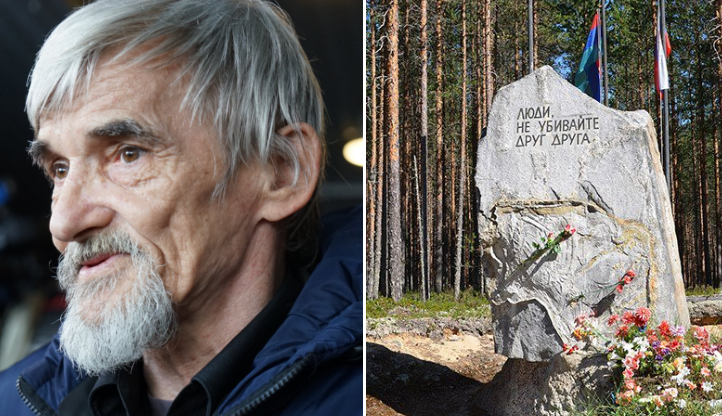 200 prominent Russians have come out in defence of Russian historian of the Soviet Terror, Yuri Dmitriev, and the child whose life the FSB is destroying for the sake of a grubby and politically-motivated trial. They express distrust in the official position taken by the prosecution and the unlawful methods being used, including the pressure being exerted on Dmitriev’s adopted daughter.

The authors of the appeal, posted on 28 October, point out that Dmitriev had been arrested initially on ‘child pornography’ charges pertaining to photos securely stored in his computer and detailing the young girl’s weight, height, etc. over the years that her physical development after the orphanage had aroused concern.  The defence had brought in highly qualified experts and with the publicity that the case had aroused both in Russia and abroad, he was acquitted on 5 April 2018.

Acquittals are virtually unheard of in Russia, and it was feared from the outset that the aim was merely to deflect unfavourable publicity and then overturn the acquittal. This is effectively what happened.  Dmitriev was remanded in custody again on 28 June 2018, just two weeks after a court revoked his acquittal on the first evidently flawed charges and ordered a retrial.

The authors of the appeal note that the Karelian investigators and prosecutors were not merely unwilling to recognize that their behaviour and the charges against Dmitriev had been unlawful.  They got the first acquittal revoked and then added even more serious charges, this time of ‘violent acts of a sexual nature’ which could carry a 20-year sentence.

Dmitriev was first remanded in custody in early December.  His daughter, Natasha, who was just 11, was taken by force from the only family she had ever known and sent to the grandmother who had passed her to an orphanage as a toddler.  For almost two years there was no suggestion of any such illegal acts and it was evident from the letter that Dmitriev’s lawyer produced in court how much the little girl loved and missed her father.

“Unacceptable and inhuman methods have been deployed: pressure on Dmitriev’s adopted daughter; manipulation of the child’s consciousness in order to get her to testify against a person close to her “, the authors of the appeal write.

“The initiators of this case are trying, whatever the cost, to prevent Dmitriev’s acquittal, to blacken his name and imprison him so as to not bear liability for the unlawful organizing of criminal prosecutions and the unlawful holding of an innocent man in detention and in psychiatric institutions for nearly three years.

All of this, they stress, is very clearly aimed at influencing public opinion and putting pressure on the court.

The use of the state-controlled media began within a month of Dmitriev’s arrest, with photos then also demonstrated that the channel had to have received from the FSB.  Those photos were examined by several specialists in sexology, etc. and were not found to contain any element of pornography.  It was also confirmed that many adoptive parents had been advised to take exactly the same photos which Dmitriev had taken.   These, it should be stressed, were professionals, giving a qualified judgement, rather than the supposed ‘expert assessment’ used by the prosecution.  In this, a mathematician, a teacher and an art historian obligingly perceived ‘pornography’ in nine of over 100 photos.

The specialist assessments were given of the only ‘evidence’ that the prosecution had come up back in 2017 and up till the original acquittal.  Had there been any possibility of getting Natasha to testify to something more, it is certain that the ‘investigators’ would have done so.

It is known that the grandmother has actively helped the prosecution and it is possible that she is putting pressure on the young girl. As the authors of the appeal say:

The authors of the appeal call on the public, specialists and the media to continue closely following the Dmitriev trial and to prevent the enforcement bodies in Karelia from crushing a worthy citizen of Russia who has devoted thirty years of his life to restoring and preserving the memory of the victims of Stalin’s mass repression in 1937 and 1938.

The timing of the letter, published on 28 October, is probably no accident.  It is 82 years since the killing by quota between 27 October and 4 November 1937 of 1,111 political prisoners from the Solovetsky Labour Camp, including 289 Ukrainian writers, playwrights, scientists and other members of the intelligentsia.   It is thanks to Dmitriev and his colleagues from the Memorial Society that their graves and those of many thousands of other victims of the Soviet Terror were found at the Sandarmokh Clearing in Karelia, near the Russian border with Finland.

82 years later, the methods are less bloody, but still demonstrate a cynical disregard for human life and determination to rewrite history.  The regime of Russian President Vladimir Putin is currently trying to ‘prove’ that the graves at Sandarmokh are of Soviet prisoners of war shot by the Finnish army.  There is absolutely no evidence for this, but by engaging the FSB, the state-controlled media and the so-called Russian Military History Society, the authorities are clearly hoping to at least cast a shadow of doubt and, most importantly, silence those who stubbornly continue to tell the truth.

One Russian historian and museum director, Sergei Koltyrin, has already been sentenced to nine years’ imprisonment after a trial held behind closed doors after Koltyrin was almost certainly placed under huge pressure to reject the services of an independent lawyer (details here).

Koltyrin was arrested three months after Dmitriev’s re-arrest, following the latter’s dramatic acquittal and on broadly similar charges.  While there is too little information to enable the certainty that exists around Dmitriev’s case, there seem strong grounds for suspecting illegitimate motivation.  That was very obviously the conclusion many politicians and others in Karelia came to since a public discussion on the claims that Soviet POWs are buried at Sandarmokh was cancelled shortly after Koltyrin’s arrest.

It is vital that the persecution of Yuri Dmitriev and the systematic efforts at rewriting the history of the Terror remain in the public eye, both in Russia and abroad.  Please help by circulating information about this case.