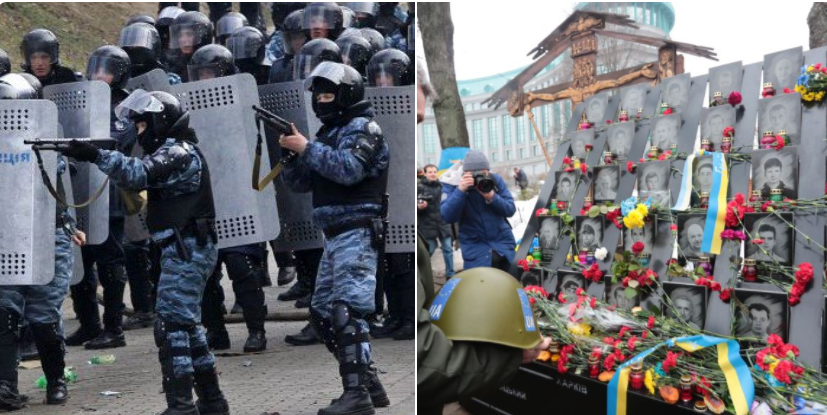 The families of those killed during Euromaidan, lawyers representing the victims of crimes against Euromaidan activists or their families and civic activists have addressed a desperate plea to Ukraine’s leaders, warning that all progress in Maidan investigations made will be lost unless action is taken immediately.

In their appeal, they say that there is a very real danger that the investigations will be stopped and the results of previous work lost.  This is because the prosecutors are due to lose their investigative functions in less than a month, while the bodies who are due to take over – the National Anti-Corruption Bureau (NABU) and the State Bureau of Investigations (SBI) – are not ready to do so

SBI cannot take on these Maidan cases since it does not have an appropriate department.  This, the authors of the appeal point out, means that the cases will be disappearing into a black hole, or being handed to new investigators, with the investigation being suspended for at least six months.  Any new investigator will need a large amount of time to study the thousands of volumes of written material and the hundreds of gigabytes of photos and video footage. “This will cause considerable damage to the investigation and arouse active opposition from the victims, participants of the Revolution of Dignity (Euromaidan) as well as civil society as a whole”.

The investigation and the work of the public prosecutor during Maidan trials are also under pressure because of the new accreditation procedure for prosecutors initiated by the Prosecutor General’s Office. “If the necessary measures are not taken now, this will lead to critical consequences as has been demonstrated by the recent court rulings on changing preventive measures in Maidan cases”.

There have been at least two such cases in the past week.  On 24 October, the Svyatoshynsky District Court in Kyiv cancelled the obligation on former Berkut officer Serhiy Tamtur to wear an electronic bracelet.  Tamtur is one of five men charged over mass killings during the bloodiest day of Euromaidan and judge Serhiy Dyachuk’s decision on 16 July to release him under 24-hour house arrest had already aroused dismay.  Several former Berkut officers have managed to flee justice, even after charges had been laid, and the fact that Tamtur is no longer obliged to even wear an electronic bracelet would make his flight very easy.

On 25 October, the Shevchenkivsky District Court in Kyiv freed Oleksandr Shcheholev from any house arrest.  The former head of the Kyiv SBU [Security Service]  was directly in charge of the SBU’s so-called anti-terrorist operation on 18 and 20 February 2014, when most of the killings of unarmed activists took place.

These two court rulings coincided with the formal dismissal of Serhiy Horbatyuk, the head of the Department for Special Investigations, whose independence and work on Maidan cases had gained him the respect and trust of the families of Maidan victims, their lawyers and Maidan-linked civic groups.

The authors of the appeal point out that Maidan activists, their lawyers and human rights organizations have been warning the government and the public about the need to organize the planned transfer of Maidan cases from the Prosecutor General’s Office to the State Bureau of Investigations for the past two years. They were ignored by parliament, the SBI management and by the Prosecutor General’s Office, and the situation is now critical.

The problem can be resolved, they say, by immediately forming a separate department for investigating Maidan cases within the central office of the State Bureau of Investigations, and transferring or appointing investigators to deal with such cases. In order to ensure continuity, independence and objectivity of these Maidan cases, they add, it is vital that the same management and makeup of investigative groups are retained when handing over the cases, with this established at the level of amendments to the Law on the State Bureau of Investigations.

As of 17 October, draft bill No. 2116 on amendments to this Law had passed through its first reading.  That draft bill allows for such a transfer, however without any link to the transfer of cases, which means it does not resolve the problem, including the situation with investigators and prosecutors who have already been dismissed.

They therefore propose Transitional Provisions which would allow investigators from the National Police or from various prosecutor’s offices to be transferred to SBI without having to compete for places.  This would apply where the said investigators had been working on a case for at least four months, with this enhancing continuity and efficiency.

In their appeal to President Volodymyr Zelensky; the Prosecutor General Ruslan Ryaboshapka; the Prime Minister Oleksiy Honcharuk; the Director of the State Bureau of Investigations, Roman Truba and the heads of parliamentary factions, the authors propose the following:

1.  Immediately form a department for the investigation into Maidan cases within the structure of the State Bureau of Investigations (within the scope of the head of the SBI). For this, the number of SBI employees must be accordingly increased (within the Prime Minister’s scope).

2.  Without delay introduce amendments to the Law on the State Bureau of Investigations to ensure the transfer and appointment within SBI without competition of investigators and prosecutors involved in teams working on criminal proceedings which are handed into the jurisdiction of SBI.  This can be achieved through the addition of amendments to the draft bill No. 2116 for its second reading, or by a separate draft bill.

3.  Safeguard independent and objective investigation into Maidan cases within SBI by appointing Serhiy Horbatyuk by 10 November to the post of head of the newly-created department.

4.  Ensure transfer of those investigators involved in Maidan investigations to the newly-created SBI department by 20 November.

5.  Guarantee that Andriy Portnov and other individuals are not able to exert pressure and interfere in Maidan investigations.

6.  Ensure the work of investigators and prosecutors who have not got through the accreditation procedure until the cases are transferred and new teams of prosecutors formed.

The appeal is endorsed by the Advocacy Advisory Panel; the Families of the Nebesna Sotnya Heroes [those killed during the Revolution of Dignity]; Euromaidan SOS and the Centre for Civil Liberties.