How can Russia deny responsibility for MH17 when it gave up Sentsov, others to get key witness out of Ukraine?MH17 suspect release incriminates Russia, but leaves Ukraine compromisedFamilies of MH17 victims call for honesty and justice from Russia as the lies continueThree out of four MH17 suspects are ‘former’ Russian FSB or military intelligence officersRussian Twitter ‘false flag’ operation to blame Ukraine for MH17 broke all recordsEuropean Court of Human Rights demands answers from Russia over downing of MH17 over UkraineNext step the Hague after Russian military source named for Buk missile that downed MH17Russian TV produces ‘witness’ of Ukraine downing MH17, then quickly removes reportRussian media twist Bellingcat study to find Ukrainian Buk in Donbas before MH17Incriminating Video, Endless Lies and Putin’s ‘Premature’ Tribunal on MH17Russian LifeNews inadvertently told the truth about downed Malaysian airlineMilitants accused of deliberately shooting at Severodonetsk residential areaSent to be shotThe EU’s Opaque Dealings with UkraineWhose anti-Semitic and Homophobic Choice?What should they talk about, Mr Putin?The Peace that chokes RussiaEU’s Clear and Consistent Capitulation?Russian tanks and Ukrainian orphans in Moscow’s unabated offensiveCheck your sources, Mr Lavrov
• Topics / Terrorism

Russia hides MH17 suspect, then uses him for lies about the disaster and about ‘civil war’ in Ukraine 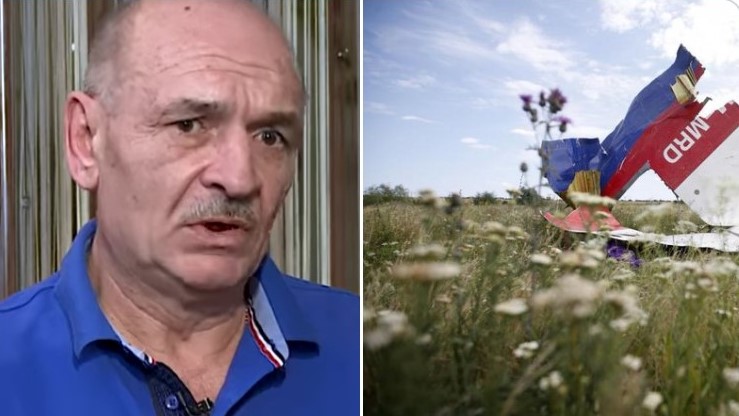 The Russian state-controlled RIA Novosti has posted an interview with Vladimir (Volodymyr) Tsemakh. a key witness / suspect, wanted in the Netherlands over the downing by a Russian BUK missile of Malaysian airliner MH17.  As is typical of all Russian propaganda material regarding MH17 and the war in Donbas, both the interview, and the subsequent headlines on RIA Novosti are highly manipulative, with crucial facts either omitted or distorted.

The interviewer was Kirill Vyshynsky, the other prominent Ukrainian prisoner whom Russia received in exchange for the release of 35 Ukrainian political prisoners. Not a word is said during the interview about the fact that Moscow had demanded the inclusion of Tsemakh, a Ukrainian citizen, in the list of people to be handed over to Russia, and that his non-inclusion appeared likely to prevent the exchange from taking place.  This is of major importance, since Ukraine’s Constitution would not have allowed Tsemakh’s extradition to the Netherlands, but Ukraine is one of the members of the Joint Investigative Team [JIT[ investigating MH17 and would have certainly fully cooperated with the Dutch Prosecutor.  It rather controversially handed Tsemakh over because of the threat that none of the 24 Ukrainian POWs and 11 political prisoners, including some with life-threatening conditions, would be released otherwise.  Russia appears to have ignored the request from the Netherlands for Tsemakh’s extradition and quickly sent him back to the Russian proxy ‘Donetsk people’s republic’ [DPR] to prevent the Netherlands having access to him.

There would be little chance of guessing any of this due to other serious omissions. Vyshynsky’s program is entitled ‘People of Donbas’ and claims to be about people “living in conditions of civil war in Ukraine”.

The viewer receives a very misleading version of MH17 in which Kyiv is said to have blamed the militants, who responded by saying that they could not have hit a plane at this height. It does acknowledge  that “the investigation is being carried out by an international group under the leadership of the Netherlands”.

The last sentence is critical, but brushed over quickly.  Kyiv certainly blamed the militants, but it did so together with the United States and all EU countries.  There could hardly be any other version when the militants themselves had boasted of having downed another Ukrainian military transport plane. It became clear very soon, however, and has been demonstrated in exhaustive detail, that the plane was downed by a Russian BUK missile and that the missile carrier was hurried taken back across the border into Russia.  JIT believes it has irrefutable evidence that “the Buk missile which downed Malaysian airliner MH17 on 17 July 2014 came from the 53rd Anti-Aircraft Missile brigade which is a unit of the Russian army from Kursk in the Russian Federation”.

Vyshynsky says that Tsemakh “has been virtually made the main witness in the Boeing case’ merely because you were in charge of anti-aircraft defence of Snizhne”.

In fact, the Dutch Prosecutor has reportedly classified Tsemakh as a suspect, and at least his witness status is because of a video in which Tsemakh seems to admit to playing a role in the attempt to conceal the BUK missile launcher after it became clear that a passenger airliner had been downed.

In the interview, Tsemakh claims to have known only as much as the public, and that he only learned of it “in the evening, or the next day in the morning”.

Tsemakh was captured on 27 June 2019, in an extremely dangerous operation carried out by SBU [Ukraine’s Security Service] officers.  He was formally charged under Article 258-3 of Ukraine’s Criminal Code, with creation of a terrorist organization, however his link with MH17 was clear from the outset, except, of course, on Russian state-controlled media.

Here the capture is described as an “abduction”, with no mention given of one reason why it worked, namely that Tsemakh, who has an alcohol problem, was very drunk.  Vyshynsky asks him if he is willing to tell a court about “the abduction, the tranquilizers, the forced detention, the interrogations… Are you planning to turn to the international courts?”  Tsemakh says that he is “considering such an option”.  Neither man sees fit to explain why, if Tsemakh wanted “to turn to an international court” and if he considers himself to have been the victim of “an act of terrorism by the Ukrainian state”, he and Russia went to such lengths to avoid him getting anyway near such a court.

A few details are not completely omitted.  We learn, for example, that he was questioned by police officers from Holland and from Australia.  Although this is clearly very important, most of the attention is given to how well the interviewers spoke in Russian, not what information they sought from him.  When asked if they had put pressure on him, Tsemakh claimed that he had been offered “a program of witness protection, citizenship and a house in Holland, for some reason, why not in Australia?  - that’s what surprised me, and I didn’t bargain”

Russia cannot seriously hope that any but an internal audience could be convinced by the distorted and muffled explanation of the MH17 disaster, the reason why Tsemakh was an important witness, and the overt attempt to not even mention Russia’s involvement.

On the other hand, the lies are ongoing, and there is presumably the calculation that some mud must stick if false claims keep being presented as ‘possible versions’.  Russia is very clearly using levers of influence behind the scenes, with this explaining the Malaysian Prime Minister, Mahathir Mohamad’s sudden very strange statements questioning the findings of JIT, of which it is a member. This appears to be linked with negotiations over a military – palm oil deal between Russia and Malaysia.

The other aim for bringing Tsemakh out of the woodwork was probably to push Russia’s refrain about the conflict in Ukraine being ‘a civil war’.  There were so many leading figures in 2014 who were Russian, that Tsemakh’s Ukrainian roots are convenient, as was his assertion that he joined the militants because otherwise his “grandchildren could be forced to think in Ukrainian”.  He asserts that he was “defending [his] home]”.

It seems that the criminal charge against Tsemakh remains intact, however Ukraine’s enforcement officers would need to catch him again which Russia will presumably now ensure does not happen.