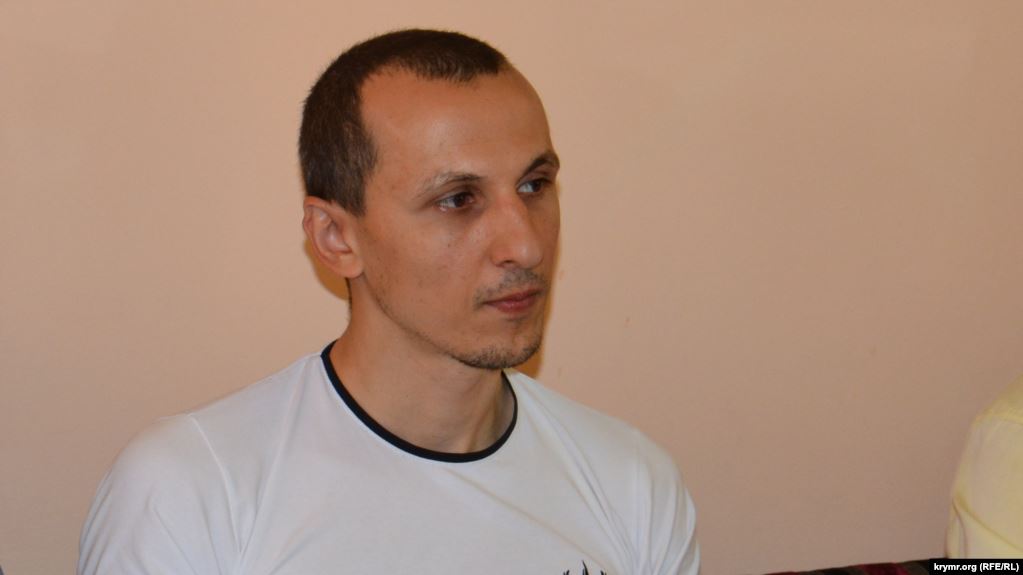 Server Mustafayev, human rights activist and one of the coordinators of the Crimean Solidarity initiative, has been imprisoned since May 2018, with the last month and a half or more in conditions that amount to torture.  The appalling treatment he is receiving would be unacceptable even for a dangerous criminal, however Mustafayev is instead a civic activist and journalist whose arrest was evidently linked with his work in Crimean Solidarity, helping political prisoners and publicizing rights abuses in occupied Crimea.

On 29 October, his lawyer, Lilya Hemedzhy was able to visit Mustafayev in the Krasnodar SIZO [remand prison] where he has been held since being moved from Simferopol.  She calls the conditions inhuman and “akin to torture”  For a month and a half he was heldv in total isolation, but now another person has been placed in his cell which is a mere four square metres.  That space also includes a toilet which is not in any way cordoned off.  This is evidently unlawful and it is typical that Mustafayev’s official papers lie and say that he is in an ordinary cell.

Hemedzhy says that Mustafayev has written three complaints against the head of the Krasnodar SIZO.  He and his lawyer view his treatment both as an element of pressure, with this having begun back in Simferopol, and as a method for isolating him from prisoners whom he would doubtless seek to help.  It is not clear when he and another civic activist, Taras Ibragimov, will be moved, although six other Crimean Tatar political prisoners who were taken from Simferopol together with them have been moved to Rostov-on-Don where their ‘trial’ will take place.

Mustafayev was born on 5 May 1986 in Uzbekistan where his family was sent during Stalin’s Deportation. His family returned to independent Ukraine when he was very small.  He and his wife, Maye, have four small children, two boys and two girls.

Mustafayev is a highly respected civic activist and journalist, and was one of the coordinators of the Crimean Solidarity initiative, formed to both help political prisoners and their families, and to provide information about the ever-increasing numbers of armed searches, arrests and political trials.

Mustafayev was also one of the first Crimean Tatars to understand the need for civic journalism and to begin streaming the constant searches and arrests online.  As well as providing vital information to mainland Ukraine and abroad, this also alerted other activists who would immediately come to stand and peacefully show solidarity.  The Russian occupation regime first reacted by rounding up men who were simply standing outside, with obedient ‘judges’ then jailing them for up to 10 or 15 days.  When this overt intimidation failed to deter activists, more draconian forms of repression began.  From the arrests on 11 October 2017, at least half of the people arrested on spurious ‘terrorism’ charges have been civic activists, including many from Crimean Solidarity.

Although that bad record has now been broken, the arrests on 11 October 2017 of Suleyman (Marlen) Asanov; Ernest Ametov;  Memet Belyalov; Timur Ibragimov; Seiran Saliev and Server Zekeryaev , and then on 21 May 2018 of Mustafayev and Smailov were the first time that Russia so obviously targeted Crimean Solidarity and other civic activists and journalists.  The men are all facing huge sentences for alleged ‘involvement’ in Hizb ut-Tahrir, a peaceful pan-Islamist movement which is legal in Ukraine and is not known to have committed any acts of terrorism or violence anywhere in the world.  Russia is literally the only country to have declared Hizb ut-Tahrir ‘terrorist’, and its Supreme Court did so in 2003 at an effectively secret hearing which was only made public when it was too late for it to be appealed.

All eight men were also informed on 23 February 2019 that they are being charged with ‘planning to violently seize power’ (under Article 278).  This new charge is not based on any evidence about the men at all, and is often laid as a form of revenge when defendants refuse to ‘cooperate’ with the prosecution.