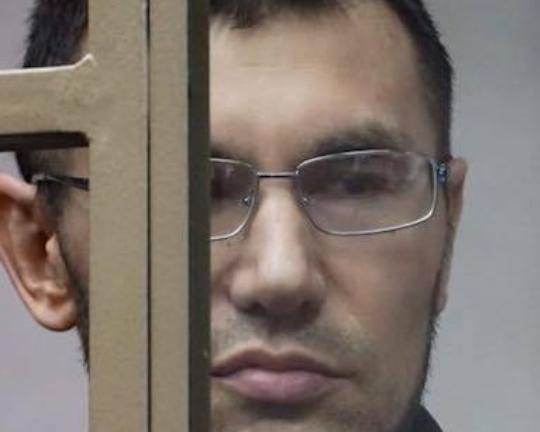 Crimean Tatar human rights defender Emir-Usein Kuku has been sentenced to 12 years’ imprisonment on bogus ‘terrorism’ charges because an attempt to abduct him went badly wrong. Since that abduction attempt , once thwarted, turned into a Russian FSB ‘search run by the same officer who later played a huge role in the ‘terrorism’ prosecution’, the connection could not be more sinister.

Kuku’s harassment by the Russian occupation regime began early. The son of a veteran of the Crimean Tatar national movement, he reacted to the ever-increasing number of armed searches, arrests and the disappearances of civic activists and young Crimean Tatars by joining the Crimean Contact Group on Human Rights in October 2014.  He took on responsibility for monitoring rights abuse in the Yalta region.

We cannot say with certainty what would have happened to Kuku if the attempted abduction that he was subjected to on 20 April 2015 had worked, however another civic activist, Ervin Ibragimov was abducted a year later and has never been seen since.  Kuku explained that two men had attacked him and seemed intent on overpowering him, and preventing him from shouting for help or using his phone.  He fortunately made enough noise for people to hear his voice and come running. By the time a van appeared with masked and armed men and pushed him into the vehicle, other Crimean Tatars had understood that he was in danger of being abducted and followed the van.in which Kuku was being savagely beaten.  He recalled that his captors were most concerned at the attention they had attracted.  They consulted with somebody by telephone and then stopped beating him, announcing instead that they were going to carry out ‘a search’ of his home. Alexander Kompaneitsev, the FSB officer who has since played a malignant role in the ‘terrorism’ charges against Kuku and several other men, only appeared at Kuku’s home, waving a court search warrant.

Kuku himself posted photos of the marks from beating he had received, and said that if he disappeared, they should look for him at the Yalta FSB office. He later refused to be silenced and demanded an investigation into the treatment he had received. This elicited contradictory statements from the FSB officers and probably renewed determination to get rid of him.

On 3 December 2015, charges against him were announced under Russia’s notorious ‘extremism’ legislation over some Facebook posts.  There had been no mention back in April, nor was there in December 2015, of Hizb ut-Tahrir.

Then on 11 February 2016, armed and masked men burst in, with gratuitous violence, to the homes of Kuku; Muslim Aliev; Inver Bekirov; and Vadim Siruk. Kuku’s son Bekir, who was 9 and Aliev’s youngest son, 7-year-old Seidali were old enough to be deeply traumatized by seeing their fathers thrown to the ground and handcuffed.  Two younger men – Refat Alimov and Arsen Dzhepparov – were arrested on 18 April 2016 in the same ‘case’.

Other men were detained that first day, though later released.  It is known that at least one of the men, Damir Minadirov, was tortured and threatened with arrest himself if he did not testify against Kuku and the others.

All the men were charged with ‘involvement’ in Hizb ut-Tahrir, a peaceful pan-Islamist movement which is legal in Ukraine and which has never committed an act of terrorism anywhere in the world.  Russia is alone in calling Hizb ut-Tahrir ‘terrorist’, and has effectively never provided any reason for the Supreme Court decision in 2003.  Yet merely on the grounds that the movement has been labelled ‘terrorist’, men who have never committed a crime are charged with ‘terrorism’ and face sentences of up to 20 years or more.  Four of the men, including Kuku, were accused of ‘involvement’ in Hizb ut-Tahrir, under Article 205.5 § 2 of Russia’s criminal code, while Aliev and Bekirov were charged with the more serious charge of ‘organizing’ a Hizb ut-Tahrir group.

There was no ‘Hizb ut-Tahrir group’, and the men were accused on the basis of an intercepted conversation, or more specifically, a pseudo-expert assessment of a conversation where the men were discussing the situation in Russia, Ukraine, the fate of Crimea, the place of Islam in both countries and various religious postulates.

Aside from that, there was the ‘testimony’ of four ‘secret witnesses’ whose identity is not known, and whose words cannot be verified.

According to the men’s lawyers, this case was extreme for the level of falsifications, including supposed ‘evidence’ from Kuku’s computer, created after Kuku had been arrested.

This was the second ‘round’ of arrests in occupied Crimea on Hizb ut-Tahrir charges, however the four Crimean Tatars arrested in Sevastopol in early 2015 had received shamefully little attention from international human rights NGOs.    It was probably the arrest of Kuku that prompted more emphatic reaction, with Amnesty International declaring him a prisoner of conscience and other international NGOs also coming out in his defence. It also prompted the emergence of Crimean Solidarity, a civic initiative aimed at helping political prisoners and their families, and also publicizing cases of repression. Over the past three years, Russia has almost stopped pretending that these so-called Hizb ut-Tahrir cases are anything but an attempt to crush free thinking and the Crimean Tatar human rights movement.  Pretence is futile when an ever-greater percentage of such prisoners are civic activists or journalists.

All six men have long been recognized as political prisoners by the authoritative Memorial Human Rights Centre and as prisoners of conscience by Amnesty International.

Kuku and his wife Meryem have two children – Bekir and Safiye who have scarcely seen their father since that terrible morning in February 2016.  There will, of course, be an appeal against the men’s sentences, however these were political trials, In Kuku’s case as a direct consequence of his defence of the rights of his fellow Ukrainians, and justice cannot be expected from any Russian court.