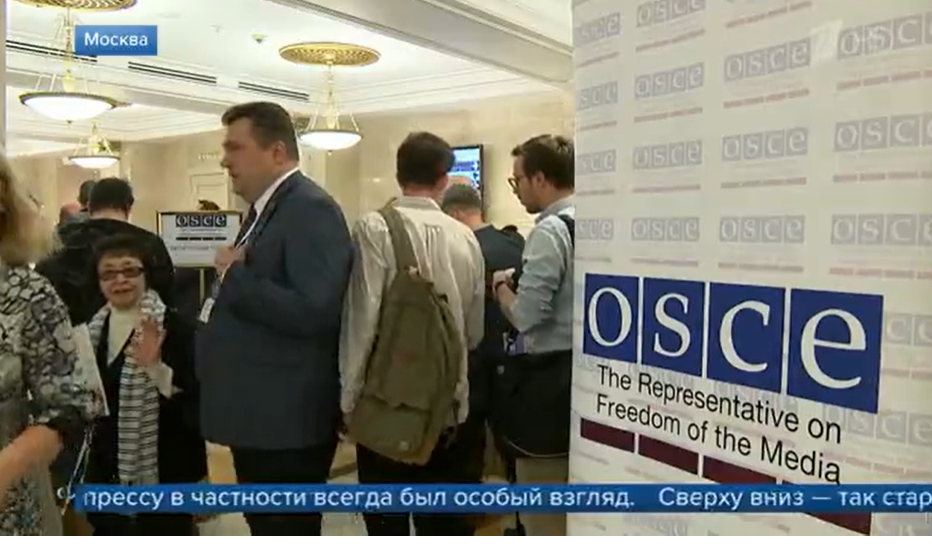 An OSCE conference has taken place in Moscow and been very widely covered by Russian state-controlled media.  This is hardly surprising, given the clear propaganda benefit for Russia from the event on 6 November, initiated by the OSCE Representative on Freedom of the Media, Harlem Désir with the support of Russia’s Foreign Ministry.

In his opening address, Désir tried hard to give his credentials as a person who has criticized media freedom issues in the Russian Federation, while not offending his Russian hosts.  One imprisoned Russian journalist was named, although there are very many.  No mention at all was made of the situation in Russian-occupied Crimea, despite the total elimination of press freedom and the imprisonment on totally spurious charges of nine civic journalists, persecuted for reporting on human rights violations.

Désir’s evident desire to claim parity where there was none led to regrettable distortion in his address.  He spoke of how Kirill Vyshynsky’s participation in the conference was “particularly moving for me” as he had intervened on his behalf, and noted that Vyshynsky’s release had “resulted in the release of Roman Sushchenko and Oleg Sentsov, both from Ukraine”.

All three men are in fact from Ukraine, but that is where the similarity ends, since the political motives behind the ‘trials’ of Sushchenko and Sentsov, and the huge sentences passed by Russian courts, were internationally recognized and the men’s release demanded.  Despite Désir’s immediate statements of deep concern back in May 2018, the same was by no means true  of Vyshynsky.  The Ukrainian national and Director of RIA Novosti Ukraine, was released and passed to Russia before his trial ended, so there is no certainty that he would have been convicted of treason.  There were, nonetheless, grounds for laying charges against him.  Vyshynsky has already returned to his former activities in pushing Russia’s line on the war in Donbas, on the downing of Malaysian airliner MH17, etc.  His “moving” involvement in the OSCE conference took place, for example, several days after Vyshynsky took a highly manipulative and dishonest interview of Volodymyr Tsemakh.  The latter is a Ukrainian, but also an important MH17 witness / suspect on whose inclusion on Ukraine’s exchange list, Russia made the release of 35 Ukrainian political prisoners, including Sentsov, Sushchenko and at least 3 men in dangerously ill health contingent.

The event was entitled ‘Conference on Freedom of the Media and Safety of Journalists in the Russian Federation and in the OSCE region: Challenges and Opportunities in the Digital Age’.  Whether they considered such challenges as Russia’s Roskomnadzor, which regularly forces the removal of material or blocks sites publishing truthful information about persecution in Russia, protests, etc., is not revealed.  It seems safe to assume that the participants did not discuss the level of surveillance in occupied Crimea, where persecuted journalist Mykola Semena was followed online as he wrote the opinion piece used as excuse for passing a two and a half year suspended sentence and silencing order.

The information on the OSCE site says that “over 200 participants representing media professionals, political representatives, academics, civil society, renowned international experts and journalists will gather at the conference to address media freedom developments and challenges across the OSCE region. “

Who some of the international figures were is unclear.  From a report on Grani.ru, entitled ‘Questions of Hygiene”, we know that the event was attended by journalists from Novaya Gazeta, RTVI and Meduza, including Ivan Golunov, the Meduza journalist whose arrest earlier this year led to a major public campaign, which the Kremlin reacted to with somewhat suspicious haste.  Grani’s video notes that the head of Roskomnadzor, Alexander Zharov, who is on several democratic countries’ sanctions list, claimed that the fact that members of respected media were sitting on the same platform as the censor proved that there is press freedom in Russia.  Such conclusions were, of course, the stuff that made this event such a coup for Moscow.

Désir had ended his address with the hope that they would “engage in a constructive dialogue on the way forward”.  How this was to be achieved is not immediately obvious, nor what kind of constructive dialogue there can be with people involved in state propaganda and / or censorship, like Sergei Brilyov; Vyshynsky and Zharov, or pushing the Kremlin line, like Foreign Minister Sergei Lavrov and Maria Zakharova.  These are all people who played a direct and malignant role in the warmongering propaganda used to justify Russia’s invasion of Crimea and military aggression in Eastern Ukraine.

The sheer fact that the event was held in Moscow was already of benefit to Russia.  How could it not be when Lavrov could give an opening address to an OSCE conference and talk at length not about press and Internet freedom that are severely curtailed in Russia and almost totally crushed in occupied Crimea, but about the “censorship, division into ours and foreign and biased attitude” that Russian reporters supposedly suffer from in many countries.  It was why and how this must be countered that Lavrov clearly planned to constructively discuss.

Mounting distrust in the West to Russian propaganda outlets like Russia Today and Sputnik was presented as being “attempts to introduce biased regulation of information resources, divide them into ‘ours’ and ‘not ours’, ‘deserving’ and ‘not deserving of trust’, or speaking bluntly, to introduce political censorship”.

10-20 minutes of such pathos-filled words about the unfair treatment of RT journalists could easily encourage people to forget that this is a channel that has systematically pushed lies about an ‘Odesa massacre’ that never happened, about ‘Ukrainian government genocide in Donbas’ and much more.

Efforts by the European Parliament (and other EU structures) to fight Russian propaganda and the supposed “competition” among western governments in showing a dismissive attitude to the Russian media were all, in Lavrov’s view because the West doesn’t like what journalists from Russia say and are simply trying to muffle their voice.  In the spirit of Désir’s “constructive dialogue” a voice from the audience suggested that some of the blame might be Russia’s.  Lavrov swiftly retorted that of course “we’re to blame for everything”, continuing for some time in that vein.

Lavrov went on to claim that Ukraine is violating the rights of Russian journalists, and cited Vyshynsky, although the latter, whether he had also obtained Russian citizenship or not, was charged as a Ukrainian citizen.  Lavrov’s assertion that poor Vyshynsky was prosecuted for doing his job may, conceivably, be close to the truth, since he was doubtless taken on by Russia in the spring of 2014 to do just what he did, namely to provide deeply dishonest propaganda about Russia’s annexation of Crimea and the war in Donbas.  Lavrov cited Vyshynsky’s entirely unsubstantiated claim that there are currently 12 journalists now imprisoned in Ukraine (we can assume he did not mean in occupied Crimea, in which case the figure would be roughly correct).

Russian voices from Russia Today, etc, are in Lavrov’s rendition that “second point of view”  that they supposedly don’t want to see and hear within the OSCE.

This was what you call OSCE constructive dialogue with the support of the Russian Ministry of Foreign Affairs.