Ukrainian political prisoner: The real terrorists in occupied Crimea & those who carry out their orders 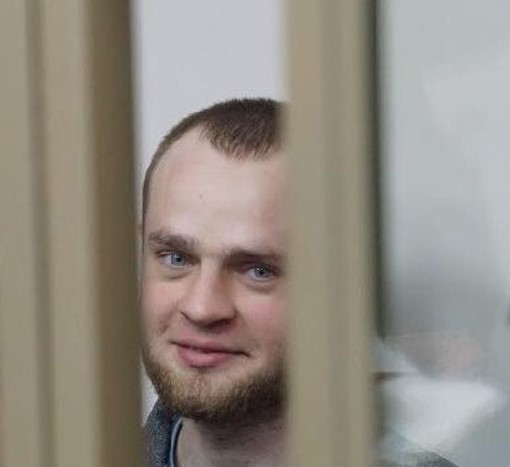 Russia’s patterns of persecution are often eerily reminiscent of the worst Soviet times, not least in the quota-like methods for choosing targets.  Vadim Siruk, an ethnic Ukrainian Muslim from Crimea, may well have been arrested in February 2016 to try to prove that Russia’s mass arrests of Crimean Muslims was not an attack on Crimean Tatars.  Natalya Siruk is sure that her son was arrested as a warning to other ethnic Ukrainians of what they can expect if they convert to Islam.

If, which is also possible, Siruk’s arrest was also aimed at silencing a person unafraid of speaking out against injustice, his final address to the court showed that they miscalculated.

Siruk, who turned 30 on 20 February 2019, his fourth birthday in Russian detention, gave a blistering assessment of the persecution that Russia had brought to Crimea.

“I lived in what was once peaceful Ukraine, where nobody persecuted me for my peaceful views in peaceful Crimea.”

Then came “2014, the “referendum” and joining the Russian Federation. New reality for the Crimean Tatar people, for Muslims of Crimea, for Ukrainian activists and others who did not support the new regime and the policy it was carrying out of repression, killings, arrests, crushing of dissident thinking and the media.  All of that was in the style of Soviet politics, and even earlier of Tsarist Russia with respect to small ethnic groups and its own people!”

“Having found ourselves in prison, we – those who have been baselessly accused of terrorism – have clearly seen and understood the flagrant human rights abuses, the denigration of human honour and dignity; the primitive attitude to the health of prisoners; the openly biased attitude to those accused under Article 205 [‘terrorism’ charges – HC].  Living in Ukraine, I had earlier heard and read about all of that in the social media and on television, and then I saw it myself”.

“We lived side by side for almost 30 years, raised our children, worked together, went to schools, and so forth.  And everything was perfectly peaceful and tolerant, and there wasn’t even the suggestion of any terrorism.”

“The real terrorists are those who burst into the homes of people peacefully sleeping, who intimidate people who tell the truth; those who have turned a resort peninsula into a military base, bringing in thousands of items of military technology; and those who persecute and imprison people for their political and religious views.”

“I believe that the international community, European and western countries should not weaken their opposition to this state’s aggressive policies, if they don’t want to see and feel all the delights of the Russian justice system in their own countries and land.  And they should not under any circumstances give way for any economic or mercantile aims and values, as “the miser pays twice” and some mistakes could prove very expensive/

Siruk speaks of those who carry out ‘investigators’; prosecutors, ‘experts’ and judges who are merely carrying out orders as slaves.  “All of them understand everything, that there never was any terrorism in the activities of the defendants, nor could there be. This seems particularly cynical and absurd against a background of Russia’s meeting with the Taliban who are recognized as terrorist.”

“It’s better to be in prison and know that you are a free man than to be a slave and think that you are free. I would like, with all my heart and on behalf of my family and other political prisoners to thank our free people for their invaluable help, constructiveness and warmth which we have experienced throughout this whole period.  This small, yet strong people, from big to small, have taken part in all kinds of assistance and solidarity with people in need and facing repression”.

Siruk has shown great courage throughout his imprisonment, condemning the fake material used by Moscow and the Russian propaganda media to try to create the impression that there really are terrorists whom the FSB are thwarting.  During one detention hearing, he accused the FSB of pushing a ‘horror story’, trying to present Crimean Tatars, the indigenous people of Crimea as ‘terrorists’.  The FSB, he added, were deliberately circulating false rumours, claiming that weapons arsenals had been found in the homes of Muslims who were thus supposed to be viewed as dangerous criminals.

Vadim’s wife, Anna Bogacheva, was expecting the couple’s second child on 11 February 2016, when FSB officers turned up, together with men wielding machine guns and, in typical breach of the law, with their own ‘witnesses’. One of the latter was a person who had previously tried to foist his company on Siruk.  He now served the FSB not only as formal witness of the search, but as ‘expert’, assessing the couple’s books.

Nothing ‘prohibited’ was found, yet Siruk was taken away and has been imprisoned ever since, as have human rights activist Emir-Usein Kuku, Muslim Aliev and Enver Bekirov.  Two younger men – Refat Alimov and Arsen Dzhepparov – were arrested on 18 April 2016, on the same charges.

The six men were charged with unproven ‘involvement’ in the peaceful pan-Islamist movement Hizb ut-Tahrir, which is legal in Ukraine.  Russia’s Supreme Court declared this organization ‘terrorist’ in a secret ruling in February 2003, with no reason given nor able to surmise since the movement is not known to have ever committed an act of terrorism or violence anywhere in the world.  Russia is the only country in the world to have declared Hizb ut-Tahrir ‘terrorist’, and since 2013 has been passing huge sentences against Muslims who have committed absolutely no crime.  Since 2015, it has been carrying out such arrests in occupied Crimea which is especially illegal since, as occupying state, it has no right to prosecute Crimeans according to Russian law.

Both the illegal use of Russian legislation in Crimea and the inexplicable ‘terrorism’ charges prompted the renowned  Memorial Human Rights Centre to recognize all six men as political prisoners, and Amnesty International has stated that they are all prisoners of conscience.

Despite the lack of any crime, on 12 November all six men received huge sentences which will, of course, be challenged.  Muslim Aliev and Inver Bekirov, who were charged with ‘organizing a Hizb ut-Tahrir group’ (under Article 205.5 §;1 of Russia’s criminal court) were sentenced to 19 and 18 years, respectively.  Kuku and Siruk were sentenced to 12 years under Article 205.5 § 2 for supposed ‘involvement ‘ in a so-called Hizb ut-Tahrir group, while Dzhepparov and Alimov got 8 and 7 years, respectively.