Refat Alimov: Final words to a Russian court when innocence is understood, but a long sentence demanded 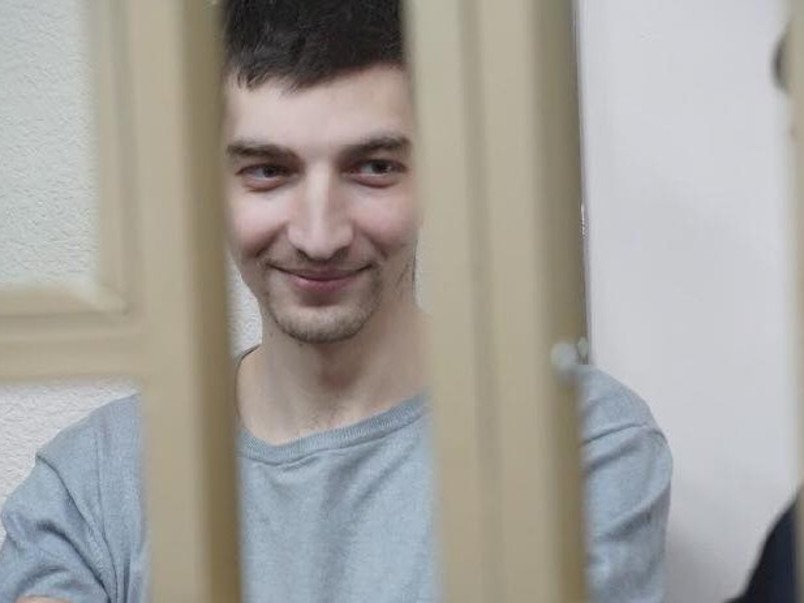 So what do you tell a Russian court whose judges know perfectly well that all six Ukrainian defendants are innocent but are still likely to pass guilty verdicts and long sentences, because that’s what is demanded of them?  Who are probably aware that all six men have been declared political prisoners by the Memorial Human Rights Centre and prisoners of conscience by Amnesty International, but who don’t want to annoy the FSB.  In his final address to the military court in Rostov on 9 November, 28-year-old Refat Alimov saw no sense in explaining why he should not receive the 11-year sentence proposed by the prosecutor despite the lack of any crime.  Instead he addressed the lawlessness unleashed upon the Crimean Tatars, the main indigenous people of Crimea, including through the use of totally fabricated ‘terrorism’ charges..

“Just because you were born a Crimean Tatar and by choosing Islam as pivotal for you, you automatically become a criminal.  This is no myth, it is not my over-active imagination, it’s real – the reality of what has been happening in Crimea since 2014. After all, the fact that we are today on trial here is not the only case of repression against the indigenous people of Crimea on religious, ethnic and political grounds.

It is, after all, no secret that the majority of our people were against joining the Russian Federation.<> This is because we have historical experience of repression, genocide, and our people having been driven from their native land. The fact that we, as innocent men, are on trial, and the lawlessness in Crimea only confirm the fears of our people and those who wisely understand that Russia is one huge prison of different ethnic groups. The only people living well are enforcement officers, traitors and those raised to the ranks of people in power. “

He went on to explain that the present generation are now experiencing something akin to the genocide of Stalin’s Deportation of the Crimean Tatar people in 1944.

“Only now it’s called ‘fighting terrorism and extremism’. We’re imprisoned for long periods not for real crimes, but for religious beliefs, merely for words, or ‘likes’ and reposts in the social media. For that they pin the label of ‘terrorist’ on us. And this wave of repression came after Crimea was joined to Russian in 2014.”

Alimov drew attention to the methods used by the FSB to force people through intimidation or under threat of huge sentences to give false testimony against others, thus inciting them to commit a crime.

“Maybe this is to justify the money invested in them to the people?  Yet when have they ever cared about the people’s opinion?  In pursuit of material benefit or career advances, under the slogan of ‘fighting terrorism’, they simply become brutalized and destroy the lives of peaceful citizens. They hand in their reports and receive their bonuses and rank.  Unfortunately, however, the reports say nothing about the shattered lives of people.  Not a word about the children who are left without their fathers and without means of existence for huge periods.  <> The bodies supposedly created to fight crime and terrorism, are effectively engaging in criminal activities for their own benefit, and thus terrorising peaceful citizens”.

It would be hard to find any exaggeration in Alimov’s assessment.  It has long been known that the FSB’s ‘Hizb ut-Tahrir prosecutions’ carry huge sentences for those convicted of non-existent ‘terrorism’ and benefits for the FSB, whether in promotion or bonuses.  This is not merely because the FSB can bump up their statistics for ‘fighting terrorism’, but because Moscow needs ‘terrorism’ and ‘sabotage’ trials to try to convince the population that Crimean Tatars and other Ukrainians pose a threat.

Alimov is the youngest of six men arrested on 11 February and 18 April 2016, and charged with supposed involvement in the peaceful pan-Islamist Hizb ut-Tahrir party which Russia’s Supreme Court in 2003 declared ‘terrorist’ without ever explaining why.  There is no evidence that Hizb ut-Tahrir, which is legal in Ukraine, has ever been engaged in any form of terrorism anywhere in the world, yet an unexplained Supreme Court decision is now deemed sufficient to imprison men for up to 25 years.  No direct evidence of any ill-doing, or even incitement, is required, and the ‘proof’ of involvement can be provided by so-called ‘secret witnesses.’

Four men - Muslim Aliev ; Inver Bekirov ; human rights defender Emir-Usein Kuku and Vadim Siruk  - were arrested on 11 February 2016 after a huge and unnecessarily brutal operation in which armed and masked men violently burst their way into homes where young children had been fast asleep.

It was widely assumed on 18 April 2016, when two more very young men  - Alimov, who is Bekirov’s nephew, and Arsen Dzhepparov were arrested, that the FSB were hoping that the younger men could be more easily broken and forced into given false testimony against the other.  The truth proved more sinister and involved a Ukrainian turncoat, now working as an FSB officer, Alexander Kompaneitsev.  The latter is known to have been behind a previous attempt to abduct Kuku, disturbingly reminiscent of the later abduction and total disappearance of another Crimean Tatar rights activist, Ervin Ibragimov.  Kompaneitsev had also put enormous pressure on Dzhepparov to act as an FSB informer and directly warned him that he would face arrest himself if he refused. The man also turned up on several occasions at the SIZO [remand prison] and tried to force Bekirov into testifying against himself and the other men, threatening to arrest his nephew if he refused.

Agreeing to collaborate meant being complicit in destroying the lives of other men and their families, and all of the six men have consistently refused to do so.  This is very likely why the FSB in January 2017 suddenly brought an extra charge of ‘seeking to violently seize power”.  The Memorial Human Rights Centre has noted on many occasions that the FSB have used this charge selectively, against those who refuse to ‘cooperate’.

It should be stressed that all of the above and multiple examples of falsified ‘evidence’ have been demonstrated in court by the men themselves and their lawyers. None of this has had any impact on the court, nor did the judges react when the defence drew attention to the fact that the prosecutor was flashing a note to Kompaneitsev during the latter’s questioning, telling him when to answer that he “didn’t remember”.

Alimov is the only one of the men who does not have children.  He had been living with his mother, whose whole world fell apart with his arrest.  Alimov has a chronic kidney condition, which has been seriously exacerbated by the appalling conditions in the Simferopol and Rostov SIZO.  In his case and that of many other political prisoners, the problem is not only in the failure to provide medical care but the obstacles they place in the way of families trying to get medication to the men.