Poroshenko urged to give 6 million rural Ukrainians their freedom after 18 long yearsUkraine risks paying billions in compensation for new extension of land moratoriumUkraine’s Parliament abolishes agricultural land moratoriumThe First 150 Days of the Full-Scale War in Kharkiv and the Kharkiv RegionInternational experts issue stark warning of Russian genocide against Ukraine‘We were lying in the open air, shells were whistling overhead.’ A resident of Mariupol tells about the evacuation and the situation in the cityRussian invaders accuse Ukraine of ‘ecocide’ for not providing occupied Crimea with water A brief description of the KHPG strategic litigations in the first half of 2021Grundfos and Siemens violate EU sanctions, propping up Russia’s occupation of Crimea Occupiers want to put Ukrainian ex-Presidents on trial for ‘terrorism’ over water problem Russia can’t resolve A brief description of the KHPG strategic litigations in July–December 2020Expert opinion (Amicus Curiae) on the application and interpretation of the case-law of the European Court of Human Rights in criminal proceeding № 52017000000000361How can a Russian oligarch control remembrance of the Victims of Babyn Yar in Ukraine?Ukraine will give Crimea away forever if it starts selling water to its Russian occupiersRussia is barbarically vandalizing UNESCO world heritage site at Chersonese in occupied CrimeaPost-election Ukraine. More of the same or a new human rights agenda?Nine Things Ukraine Should Do in 2018Chatham House Report: The Struggle for UkraineUkraine’s Most Overlooked Reform Could Bring in BillionsDestructions in Donbas. Scale, attempts at reconstruction and perspectives for redress for victims
• Topics / Social and economic rights 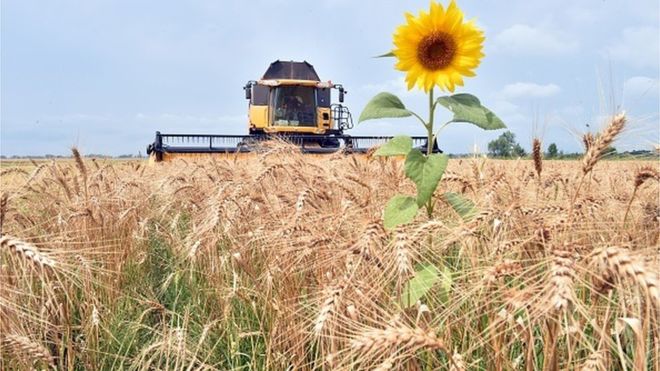 Ukrainian parliamentarians have adopted in its first reading a draft bill aimed at removing a moratorium in place for over 18 years on selling agricultural land.  The move has long been advocated by human rights groups, and made imperative by a recent European Court of Human Rights judgement against Ukraine,  however President Volodymyr Zelensky and Prime Minister Oleksiy Honcharuk are probably more interested in the support the move has received from foreign investors and the international community..

After the vote on 13 November, Honcharuk asserted that “Ukraine has taken yet another step from the third world to the first, and this is only the beginning”.  He further claimed that “the ‘guests from the past’ who are used to monopolies, schemes and ‘grey rules’ have got no chance against the future”.

In theory, this should be true since the ‘Servant of the People’ party of Honcharuk (and Zelensky) has an absolute majority in the Verkhovna Rada and does not need the agreement of other parties to push through abolition of the moratorium.  The comfortable majority of 240 MPs was made up mainly of members of Servant of the People, as well as some independent MPs.  None of the other factions voted in favour.

Public opinion, however, does not appear to favour the lifting of the moratorium and Zelensky has spoken of putting the question of opening up the land market to foreign buyers to a referendum which could well go against him.

11 draft bills were proposed, including a government bill.  The bill adopted in its first reading was that drawn up by the parliamentary committee on agrarian policy.

It was purported aimed at protecting people who had received plots of agricultural land after the Soviet kolkhozes (collective farms) were dissolved.  The argument given ever since for retaining it was that until the laws on a State land cadastre, on the land market and on land plot registration have been passed, land could be taken away from the poor and end up in the hands of oligarchs or even bought out by Russians, and that it will cease being used for agricultural purposes.

Yudkivsa also pointed out that Ukraine is the only country among the 47 within the Council of Europe which has such an absolute ban on sale of agricultural land.  The Court had heeded Ukraine’s arguments, she said, but had noted that the ban itself was supposed to be only until 2005.  If the ban had been presented as needed until land legislation was in place, why was Ukraine doing nothing to ensure this happened?

On 18 January 2019, a coalition made up of groups representing agricultural business, NGOs fighting corruption and / or defending human rights and others issued an appeal to the then President Petro Poroshenko asking him to veto the latest extension to the moratorium. They named a figure of 6 million Ukrainian citizens whose rights, they alleged, were being infringed.  A particularly poignant detail was that over half of the owners of plots of agricultural land were now over 50 and had been prevented from selling their own property for the last 18 years.  Many of these people were in need, and were clearly not being served by the moratorium.

The appeal was ignored and the moratorium extended for another year.

The problem with gauging Ukrainians’ opinion on the subject is that it seems to depend how essentially the same questions are asked.

The Kyiv International Institute of Sociology (KIIS) conducted a survey from 30 November to 14 December 2018 which found that 66.3% of respondents believe that Ukrainian citizens should have the right to freely dispose of agricultural land which they possess, including by selling it. Only 17.1% thought that people should not have this right.  Only a month earlier, KIIS had conducted a survey together with Rating and with the Razumkov Centre.  That found that if people were asked how they would vote today on a referendum regarding the question of purchase / sale of agricultural land, 72% said they would vote against, and only 13% for it.

In late September 2019, a similar survey found that a smaller percentage, but still an absolute majority (52%) were against Zelensky’s proposal to lift the moratorium.  64% believed the question should be put to a referendum.

A seemingly important restriction proposed is that one single buyer could not purchase more than 0,5% of the entire agricultural land (around 210 thousand hectares). How much real protection that would provide would probably depend on the details preventing nominal owners used as a front.

In a video address on the eve of the voting in parliament, Zelensky promised that the question of whether foreign nationals or companies without foreigners among their founders would be allowed to buy agricultural land would be put to a referendum. Here too, of course, it is easy to have a Ukrainian nominal owner, whereas the real owner is foreign.

For the moment, the bill only allows foreign nationals to inherit property which must be sold within a year.

There is, however, a provision in the Transitional Provisions to the Land Code which states that until 2024 foreign individuals or legal entities will not be able to buy agricultural land in Ukraine, whether from the state or an individual.

The BBC Ukrainian Service reports that a large number of agricultural giants have long been in the Ukrainian market and are responsible for a major part of Ukraine’s grain export.  It seems that those agricultural enterprises which have been in Ukraine for over three years and lease land, will be able to buy that land, and will even have a priority right to bid for it, once the law has come into force.  The Verkhovna Rada’s Department for Expert Assessments pointed out that since a huge amount of agricultural land is leased by major enterprises with foreign capital, meeting the requirements of the law, the restrictions imposed by the bill would not apply.

Among the politicians objecting on 13 November was Yulia Tymoshenko from the Batkivshchyna Party who noted that the bill does not regulate the question of sale of land to Ukrainians with dual nationality. This is in principle illegal, but not at all uncommon.  She pointed also to the fact that a single person would be able to own 200 – 210 thousand hectares of agricultural land and said, contradicting Honcharuk’s upbeat noises, that this would turn Ukraine into a “third-world country”.

If Servant of the People do not use their majority to simply push through a contentious bill, it looks as though the first reading, while an important step, is still very far from a lifting of the land moratorium.