Russia hides MH17 suspect, then uses him for lies about the disaster and about ‘civil war’ in UkraineHow can Russia deny responsibility for MH17 when it gave up Sentsov, others to get key witness out of Ukraine?MH17 suspect release incriminates Russia, but leaves Ukraine compromisedFamilies of MH17 victims call for honesty and justice from Russia as the lies continueThree out of four MH17 suspects are ‘former’ Russian FSB or military intelligence officersRussian Twitter ‘false flag’ operation to blame Ukraine for MH17 broke all recordsEuropean Court of Human Rights demands answers from Russia over downing of MH17 over UkraineNext step the Hague after Russian military source named for Buk missile that downed MH17Russian TV produces ‘witness’ of Ukraine downing MH17, then quickly removes reportRussian media twist Bellingcat study to find Ukrainian Buk in Donbas before MH17Incriminating Video, Endless Lies and Putin’s ‘Premature’ Tribunal on MH17Russian LifeNews inadvertently told the truth about downed Malaysian airlineMilitants accused of deliberately shooting at Severodonetsk residential areaSent to be shotThe EU’s Opaque Dealings with UkraineWhose anti-Semitic and Homophobic Choice?What should they talk about, Mr Putin?The Peace that chokes RussiaEU’s Clear and Consistent Capitulation?Russian tanks and Ukrainian orphans in Moscow’s unabated offensive
• Topics / Terrorism 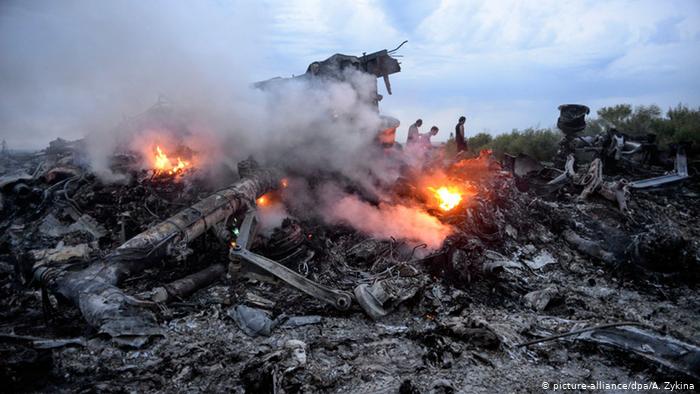 The team investigating the downing by a Russian BUK missile of Malaysian airliner MH17 over eastern Ukraine in July 2014 has published new and damning evidence of direct high-level Russian links with the militants controlling the territory.

Western media have rightly noted that the intercepted telephone calls incriminate Moscow, yet have been frustratingly sloppy in reporting on who it was in Ukraine that Moscow was controlling.  This is critical since three of the four suspects so far named are ‘former’ (or current) Russian FSB or military intelligence officers.  One of these men, Igor Girkin and another Russian DPR leader,  Alexander Borodai figure in the intercepted calls.  Girkin, Borodai and other Russians have consistently parroted the Kremlin line that they were ‘volunteers’, however JIT points out that this is not borne out by witness testimony, nor by the intercepted calls. In one of these conversations, for example, on 3 July 2014, Borodai can be heard stating that he is “carrying out orders and protecting the interests of one and only state, the Russian Federation’.

The Kremlin has every reason to be worried by the new evidence which the Joint Investigative Team [JIT] published on 14 November, as well as by the fact that JIT is clearly receiving testimony from witnesses connected with the self-proclaimed ‘Donetsk people’s republic’ [DPR].  This testimony and other information has revealed “that Russian influence on the DPR went beyond military support and that the ties between Russian officials and DPR-leaders appear closer”.  The investigators began their report by inviting testimony from any witnesses “who are able to testify about these command lines and the role that Russian government officials might have had.”

In an intercepted call on 1 July 2014, between a DPR member and a fighter ‘Mongol’, the DPR member says:  “We’re moving towards unity of command. What happens next is a bunch of men with a mandate from Shoygu will arrive and kick the local warlords the fuck out of the units -  … and then people from Moscow will take charge.(…)
JIT has been told by several former DPR fighters that “the Russian security service FSB and the military intelligence service GRU were involved in the daily management of the DPR. One of the witnesses stated that DPR leaders regularly went to Moscow to consult with their contacts at the FSB and GRU.”

It notes that “intercepted phone calls also seem to show the involvement of Russian security services, working side by side in directing the DPR.” In a call from 18 July 2014 (the day after MH17 was downed), two DPR  say that they are getting calls from Moscow: one from the FSB, the other from GRU.

Girkin and Borodai both ‘left’ DPR’ in August 2014.  Girkin has never concealed that he was ordered to leave, and hand over ‘control’ to Alexander Zakharchenko.  The latter had the advantage to Moscow, especially in the period between the downing of MH17 and the first Minsk accords, of being a Ukrainian national.  In at least one interview, Girkin has made it clear that Zakharchenko was Surkov’s choice, and JIT is now eager to establish who gave the orders to Girkin and Borodai to hand over control to Zakharchenko.

It is difficult to summarize a report so full of incriminating evidence.  JIT reports, for example, that DPR members “used secure means of communication. A number of these seem to be provided by the Russian Federation and, moreover, used by Russian top officials in their contact with the fighters.  The JIT has found indications that the security service FSB provided telephones that cannot be wiretapped.”  It cites an intercepted telephone call from 3 July 2014 in which Sergei Dubinsky mentions which fighters (those holding important posts in DPR) have special phones which he says come from the FSB in Moscow.

Dubinsky is one of the three Russians and one Ukrainian whom JIT named as suspects on 19 June 2019, and whose trial in absentia is due to begin in March 2020.  Dubinsky was, or is, employed by the Russian GRU, and it seemed clear from the Dutch Prosecutor’s words about Russia’s failure to cooperate that it is suspected that he was still “working for the Russian government”.

JIT reports that there was a batch of telephone numbers used by DPR key figures with the first number from the batch between a phone used by Surkov.  In an intercepted call from 11 July 2014 between Borodai and Surkov, Borodai says that he urgently needs military support from Moscow. In another call from 3 July, Surkov assures Borodai that there will be reinforcements from Russia and also ensures that Vladimir Antyufeyev, a Russian who served Moscow first for a long time in Transnistria, the Russian-controlled ‘breakaway’ area of Moldova.  JIT cites another telephone conversation as well which points to Russian influence on appointments in DPR. These correspond to the content of an e-mail with an attachment addressed to Surkov, which was found in open sources. In that e-mail a list of candidates for the DPR government is attached.

JIT’s findings are of importance for other current or potential proceedings in international courts.  The International Criminal Court’s Office of the Prosecutor has been taking a very long time to determine how much the conflict in eastern Ukraine constitutes an international armed conflict (in which Russia is involved).  Surely the degree to which political appointments seem to have been made from Moscow, and funding and military assistance also from there indicate a serious degree of Russian control.

JIT notes that one high-ranking DPR member has said that “nearly the entire DPR budget was paid by Russian funds.”, and cites an intercepted call in which Borodai is told that the money he needs is ready in Moscow.

Incidentally, intercepted calls between another Putin aide, Sergei Glazyev and various individuals in Crimea and other parts of Ukraine indicate that Russia was also spending money on manufacturing supposed ‘uprisings’ in other Ukrainian cities as well.

JIT also reports that “several former DPR-members have testified about the military influence from the Russian Federation,” and cites several intercepted calls about provision of military equipment, etc.  Most importantly, “these talks include the role of General Serdyukov, a commander of the Southern Military District of the Russian Federation, in delivering equipment for the mission. Sergey (A) also speaks about the Russian Minister of Defence Shoygu, who supposedly had been involved in the matter in an earlier stage.  In another call, coordination is indicated with Alexander Bortnikov, Director of Russia’s FSB.

All of the investigation’s findings on MH17 and Russia’s control of DPR should also be useful for Ukraine’s case against Russia at the UN’s International Court of Justice. It should be noted that most of the findings coincide with testimony gathered in Ukraine from former DPR hostages, with various Ukrainian or international studies, and, very often, with admissions from the above-mentioned DPR suspects or other figures themselves.  Borodai, for example, recently acknowledged that the so-called ‘republics’ exist because of Putin and Russia. Girkin and neo-Nazi Russian militant Alexander Zhuchkovsky have made similar admissions.

The JIT conclusion is totally damning: “As evidenced above, the JIT has information that indicates that the influence of the Russian Federation extended to administrative, financial and military matters in the DPR. Mutual contacts intensified in the first half of July 2014. There was almost daily telephone contact between the leadership of the DPR and their contacts in the Russian Federation. They spoke with leaders in Moscow, near the border with Ukraine and in Crimea. Communication mostly took place via secure telephones provided by the Russian security service.

The indications for close ties between leaders of the DPR and Russian government officials raise questions about their possible involvement in the deployment of the BUK TELAR, which brought down flight MH17 on 17 July 2014. The BUK TELAR originating from the 53rd Anti-Aircraft Missile Brigade, a unit of the Russian armed forces from Kursk in the Russian Federation.

The trial in absentia of Russians Girkin, Dubinsky and Oleg Pulatov and Ukrainian Leonid Kharchenko over their alleged involvement in the downing of MH17 begins on 9 March 2020.  In announcing the charges, the Dutch Prosecutor explained that ““being the highest in command, Girkin was in direct contact with the Russian Federation”, and that Dubinsky “was in regular contact with Russian officials as well”

Together the suspects “formed a chain linking the self-proclaimed Donetsk people’s republic with the Russian Federation”.  “It was through this chain that the suspects were able to get heavily military equipment from Russia to the battlefield in eastern Ukraine”. This was, of course, how the Buk missile launcher was brought to Donbas, and then hurriedly sent back across the border after the disaster.

298 people lost their lives in the MH17 disaster, including 80 children.  Russia has continued to deny any involvement while using its position on the UN Security Council to block a UN investigation, and expending considerable resources on spinning ‘alternative versions’ or other forms of disinformation. The Joint Investigative Team was formed by Australia; Belgium; Malaysia; the Netherlands and Ukraine.