So do most people in occupied Donbas want to join Russia and blame Ukraine for the war? 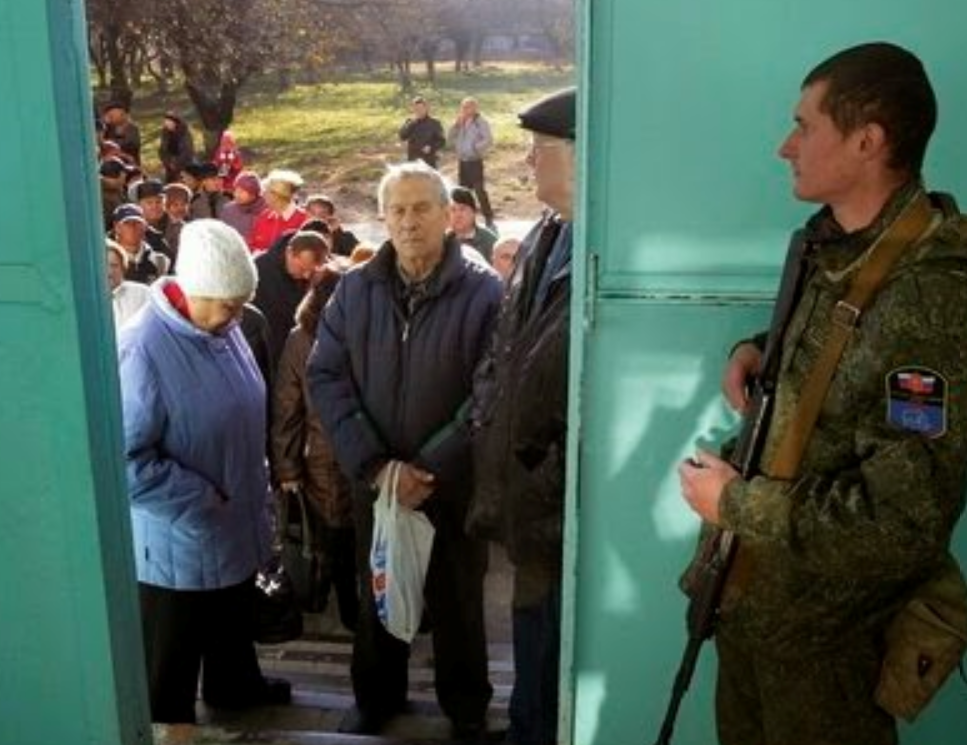 On 9 November, Dzerkalo Tyzhnya published an article entitled ‘Test of Compatibility’, based on the results of a survey carried out in the self-proclaimed ‘Donetsk and Luhansk people’s republics’ [DPR and LPR]. The results of the survey elicited alarm and furious debate, essentially because a majority of the respondents interviewed demonstrated a view of the conflict and its causes that echoed Russia’s narrative, and suggested that any ‘compatibility test’ had proven negative.  There are, however, very serious doubts about the agency and how it undertook the survey, as well as to whether it is possible to carry out any realistic surveys under present conditions.

The authors of the article explained that the survey had been carried out in October on behalf of Dzerkalo Tyzhnya and the Institute for the Future think-tank by the New Image Marketing Group.  It was asserted that the latter Kharkiv-based agency’s services in travelling to DPR and LPR have long been “used by international organizations and institutes”.

The Group does not seem to have its own webpage and it is unclear to which  “international organizations and institutes” the authors were referring. Their assessment of the New Image Marketing Group is categorically rejected by Dennis Kazansky, a well-known journalist originally from Donetsk, who cites occasions from 2009 and 2012 when the agency was reported to have produced commissioned and misleading ‘surveys’ aimed at supporting particular politicians.  The example from 2012 is particularly worrying as the publication quotes a source from Dzerkalo Tyzhnya.

Kazansky is by no means the only person who has expressed concern about the reliability of the Group’s methods and its findings.

Representatives of the Group are said to have travelled to the two so-called ‘republics’ where they carried out 1606 face-to-face surveys, 800 in ‘LPR’ and 806 in ‘DPR’.  The selection was based on official statistics from 2014, with these corrected to take into account statistics regarding the numbers of displaced persons who left occupied Donbas.

The authors of the article advise readers to continue, saying that “this is painful, but sobering”.

The results are certainly disturbing.  76% of the respondents either totally or probably agreed with the assertion that the war in Donbas is “an internal Ukrainian conflict”. Only 14.1% probably disagreed, and 9.3% totally disagreed. 86% did not agree that the conflict had been provoked by Russia.  An overwhelming majority consider Russia’s invasion and annexation of Crimea to have been “lawful”, and would prefer Donbas to be part of Russia.

The authors of the article gleaned some scope for optimism in the fact that 57.8% of the respondents named themselves Ukrainian citizens.  34.8% called themselves ‘citizens’ of either DPR or LPR.  Since these so-called ‘republics’ have only been ‘recognized’ by other Russian-controlled ‘breakaway entities’, not even Russia, this is one of the many answers which elicit the suspicion that respondents were giving a ‘safe’, rather than a truthful, response.

Officially Ukraine does not allow dual citizenship and in principle the fact that 42% of the entire number of respondents had never considered getting Russian citizenship (which Russia has illegally made easy) is a positive thing.  It cannot be seen as positive if almost 35% have voluntarily obtained ‘citizenship’ of the non-existent republics, though there is no way of gauging how voluntary this was.  7.4% said that they already have Russian citizenship, although some may already have had this.

All of the above, and other views, seriously clash with the views commonly held in government-controlled Ukraine.  The authors of the article used the survey as a prompt to questions around the difficulties involved in reintegration of these areas into Ukraine.

Over 84% of respondents said that they receive political news from television; 60% from the social media; almost 50% from the Internet and 7.4% from the printed media.  It is known from other sources that numerous Ukrainian Internet websites are blocked in either one ‘republic’ or both, and the first thing that militants did when they seized control of areas in 2014 was to cut access to all Ukrainian television and radio channels.  Most of the channels that respondents watch, in particular the Russian state-controlled Rossiya 1, are notorious for their heavily biased presentation of any topics linked with Ukraine, the war and Crimea.

This raises questions about how respondents could have come to give the answers they did, but does not in itself mean that the answers should not be taken seriously.  If people are, on a day-to-day basis, hearing propaganda, then this must obviously influence their views.

Synayuk says that 22% refused to carry out the survey, but why they refused, and the others agreed cannot be clear, nor can who the interviewers were.  There is an added complication which should be taken into account, namely that the interviewers were also considering their security. He says that “if subjectively the interviewer felt that the people might later call the police, make phone calls somewhere, s/he went further”.  The interviewers had their own story which was aimed at putting people at ease.   Timofiy Brik and other sociologists from the Kyiv School of Economics subjected the report itself to scrutiny and believe, on the contrary that only 22% of people were actually surveyed, with this making a huge difference.

Volodymyr Paniotti from the Kyiv International Institute of Sociology says that his institute does not carry out surveys in occupied territory at all since it is hard to monitor the validity of the data since “of course people in DPR/LPR feel psychological pressure.”

It is impossible to say with certainty what percentage of the population in DPR / LPR is aware of the number of civilian hostages, and the fact that these include at very least two journalists – Stanislav Aseyev and Oleh Halaziuk – imprisoned for writing truthfully about life in the ‘republics’.  Many will, however, know quite enough to be nervous about ‘saying the wrong thing’, especially given the armed militants whose presence can hardly be ignored.

All of this raises questions also over the plans to hold ‘local elections’ in the two ‘republics’ in circumstances where ordinary democratic prerequisites for free and fair elections are evidently missing.

In expressing her reservations about the survey and the article, Maria Zolkina, a senior analyst at the authoritative Democratic Initiatives Foundation, asked a pointed question.  “Why publish this, even if you’ve carried out [the survey]?”

“The argument “to look reality in the eye” does not work: the survey on occupied territory gives no accurate or even representative idea of real public opinion. Due to reservations about the selection; the sincerity of respondents; the refusals (incidentally, what was the percentage of refusals? That is very important); who the interviewers were (were they all “brought in” from Kharkiv, or were they locals from ‘DPR/LPR’ who went around people’s homes?), the saturation of propaganda media; the ‘ministry of state security’ and so forth, the data received can certainly not be a roadmap for state policy.”

The effect is to have created the impression of an alien body beyond the demarcation line, people who don’t want their territory to be part of Ukraine.  “I would ask the question: whom does this argument help?  Reject reintegration? Decide that they’re all alien there and on a different path from us?  So what practical consequences from these results are there for state policy, or for internal discussion?”  She notes that the article is written in overly emotional style and does certainly suggest that for people in occupied Donbas, the above-mentioned conclusions (about a civil war, about who is to blame, etc.) have been reached, although the problems with the survey and the unanswered questions leave no grounds for such conclusions.

If we know, and Zolkina is certain that we do, that “this diagnosis (with the pro-Russian narrative) can be changed if there is a change in information field and the emergence of a basic sense of security” then why even put such questions, implying that they are different and we need to accept this?

Worth noting that some of the propaganda can be refuted very easily. Towards the end of 2014 a human rights mission visited several cities in Donetsk oblast that had earlier been under DPR militant control. They reported that after months when the Kremlin-backed militants had done everything to present the Ukrainian army as ‘punitive forces’, the residents of Krasny Lyman had been fearful of ‘purges’; arrests; repression’ when the Ukrainian soldiers arrived.  Nothing of the sort took place, while in Sloviansk the first day of liberation began with free sausages being handed out.