Foreign Agents as new ‘enemies of the people’ in Russia and occupied CrimeaRussia launches dangerous new ‘foreign agent’ offensive against independent NGOsRussian legislators launch multiple hits against civil society in occupied Crimea and RussiaFSB deploys menacing new weapon against journalists and lawyers in Russia and occupied Crimea From a Zwastika to "No to the War". Anti-war activities in Russia, 9-18 SeptemberSilence abets Russia in torturing and risking the lives of Ukrainian hostages and POWs in occupied DonbasConflicting values and conflicting narratives: the case of Russia’s war on Ukraine“He lay on the sidewalk, naming towns and cities in Ukraine”. A digest of anti-war activities in Russia, 23-29 JulyRussian FSB threaten and beat imprisoned Crimean journalist and human rights defender Iryna DanilovychRussian legislative changes would mean school leavers can officially be sent to fight in Ukraine “We’re not celebrating today” – digest of Russian protests (early June 2022)ECHR rules too late against Russia’s notorious ‘foreign agent’ law and hardly moves over violations in occupied Crimea Savagely tortured Ukrainian journalist sentenced to six years by Russian occupation court Number of political prisoners in Russia and occupied Crimea hits a symbolic milestone“Memorial” cannot be closed – it is the need to know the truth about the tragic past: statement of the Ukrainian human rights organizationsRussia equates defending political prisoners to ‘justifying terrorism’ in ban on Memorial Human Rights CentreEuropean Court of Human Rights halts Russia’s execution of vital Memorial Society and Memorial Human Rights CentreAttack on major human rights watchdog augurs new weapon of repression in Russian-occupied Crimea Russia announces ‘Ukrainian spy and saboteur’ arrests while accusing Ukraine of a military build-up in DonbasCourt blocks exposure of fake experts in Russia’s attempt to dissolve Memorial Human Rights Centre as "extremist"
• Topics / News from the CIS countries
• Topics / Human Rights Abuses in Russian-occupied Crimea 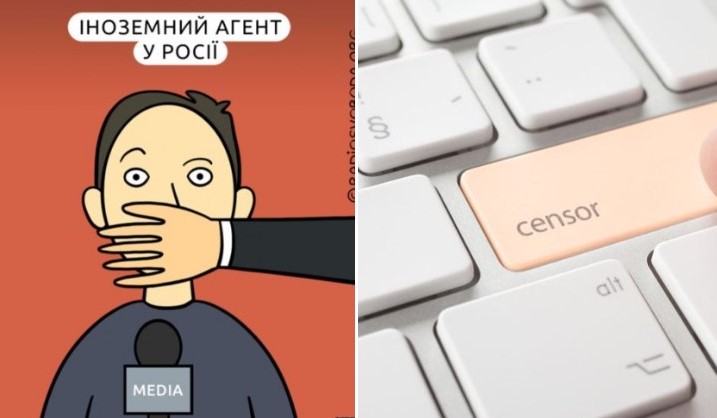 Russia’s State Duma has moved another step towards adopting a dangerous new bill which will mean that individuals working in Russia or occupied Crimea can be branded as ‘foreign agents’.  The bill has already been condemned by international rights NGOs and looks likely to be adopted in full this week.

The proposed amendments to the Law on ‘Foreign Agents’ will mean that individuals can be labelled as foreign agents if they circulate or take part in creating material of media designated as foreign agents, or of legal entities created by such media.  The label will be applied if the individuals receive money or other assets from foreign states; state bodies; international or foreign organizations; foreign nationals or stateless persons and their representatives; from foreign media ‘foreign agents’ or Russian legal entities created by the latter.

Leonid Levin, head of the Duma’s committee on information policy told Interfax.ru that the mere fact that a staff member of a media ‘foreign agent’ receives a salary does not automatically mean that s/he will be labelled ‘foreign agents’. Levin made no attempt to hide the real aim of this bill, that being to muffle or, at least, seriously hamper people writing material on socio-political subjects.  He does not think that a person writing about culture, sport or music would end up labelled a ‘foreign agent’, but for those writing about socio-political issues there would certainly be such a risk.  Levin expanded on what was essentially a lack of any foreseeability, since merely receiving payment might not be enough to make you a foreign agent, but then again it might. Each specific case would be decided by Russia’s justice ministry together with the foreign ministry.

These amendments were tabled by Duma deputy Vasily Piskarev and senator Andrei Klimov, both of whom head their respective ‘commissions on investigating foreign interference in Russian matters’.  Those commissions were formed in the wake of protests in Moscow over Russians being effectively stripped of fundamental electoral rights.  The Russian authorities reacted with repression and accusations of western influence.

The draft bill would come into force in February 2020, and would envisage absolutely exorbitant fines (up to 5 million roubles) for the so-called media foreign agents.  The fines for individuals would range from 10 to 100 thousand roubles.

At present, Russia’s justice ministry has labelled 10 media ‘foreign agents’, including one of the only reliable sources of information about occupied Crimea: Krym.Realii.  The others are: Voice of America; Radio Svoboda itself; several services like Krym.Realii and the linked TV channel RealTime.

A large number of media and human rights organizations, including Amnesty International; Human Rights Watch; Reporters without Borders and Civil Rights Defenders have warned that this law threatens journalists and bloggers.  They believe the bill “will have a detrimental impact on the already restrictive environment for independent journalism in Russia, and must be dropped.”

Essentially any journalist or blogger receiving grants or payment for a specific piece of work from any foreign source could end up labelled a foreign agent.  That would mean that any information that they published would have to be labelled ‘foreign agent’.

The NGOs quote Galina Arapova, senior media lawyer at the Mass Media Defense Centre in Russia who warns that the new amendments make “foreign agents” legislation, “which already violates international standards on freedom of expression and association, unjustifiably tough”.  Any person collaborating with foreign editorial offices could have this label imposed.

The NGOs stress that “the requirement to register with the Ministry of Justice is also concerning, creating onerous requirements, particularly for Russian bloggers living abroad. In addition, the use of fines for the lack of labelling is likely to squeeze their reporting and blogs from the Russian Internet, as those on social networks will not repost for fear of sanctions.

Russia’s move to label individuals as foreign agents is a further step to restrict free and independent media in the country. It will have a serious effect on international media cooperation with Russia, because any involvement with a foreign outlet will put journalists at risk of being labelled “foreign agents.”  It will also become a strong tool to silence opposition voices.”

While their call on the Russian government to drop the amendments can only be reiterated, the plan for a third reading on Thursday makes it likely that they will be adopted.

Since 2012, NGOs engaged in something that the law terms ‘political activity’ and receiving any funding from abroad have to be registered as a ‘foreign agent’.  Russia’s justice ministry has the power to forcibly label NGOs ‘foreign agents’, with this significantly restricting their rights and possibilities.