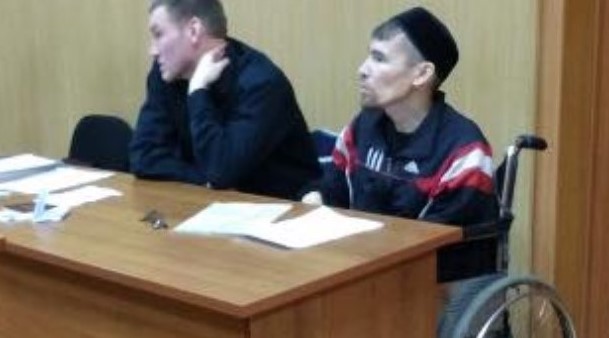 Amir Gilyazov, who is wheelchair-bound and suffers from muscular dystrophy, has been sentenced by a Chelyabinsk military court to 11 years’ maximum security  imprisonment in a case that demonstrates the absurd nature of Russia’s most notorious conveyor belt ‘terrorism’ prosecutions.  The court did, at least acknowledge Gilyazov’s grave illness and released him from serving what would have swiftly proven to be a death sentence.  While such a waiver may seem obvious, the Russian prosecutor had demanded a real 12-year sentence, and Gilyazov had initially been held in the horrific conditions of a Russian SIZO [remand prison] for two months.

Gilyazov, who is now 48 and weighs just 40 kilograms, has suffered from Duchenne muscular dystrophy since childhood.  At the time of his arrest on 23 October 2018, he had reached the stage in what is a progressive, genetic disorder where he could not get from bed to his wheelchair or eat without assistance, yet this did not stop the FSB and Russian prosecutor insisting on his detention.  Although his condition is on the list of illnesses which made detention impossible, a first court immediately agreed to his detention, with this upheld by the Chelyabinsk Regional Court.

The FSB claimed that Gilyazov was a member of Hizb ut-Tahrir, a peaceful, pan-Islamist organization which is not known to have committed any acts of terrorism or violence anywhere in the world.  Russia is the only country in the world to have declared it ‘terrorist’, and did so in a Supreme Court ruling which was kept secret until it was too late to appeal against it.

It is known that FSB officers get promotion, bonuses or other benefits from these ‘Hizb ut-Tahrir cases’ which enable them to produce good statistics on ‘fighting terrorism’, while expending very little time or effort.   This was presumably the reason why they did not balk at accusing a man bound to a wheelchair and totally dependent on others of taking part in Hizb ut-Tahrir.  It was asserted that Gilyazov’s ‘participation’ in Hizb ut-Tahrir had been via the Internet through trying to ‘recruit other participants’.  The one piece of ‘evidence’ produced was a video clip that Gilyazov had posted seven years earlier about the release of a political prisoner, imprisoned on charges of involvement in Hizb ut-Tahrir.

Aside from this, the charges appear to have been based on the testimony of so-called ‘secret witnesses’ whose identify is not revealed to the defence and whose statements cannot therefore be verified.  Here too Gilyazov’s situation highlights the cynical dishonesty around these cases.  The justification for total secrecy, even including voice distortion, is that the alleged ‘witnesses’ need to be protected from attempts to put pressure or threaten them by defendants and their family.  In this case there is a man in a wheelchair suffering from a cruel debilitating disease, his wife and young family.

The defence has rejected all the charges, and says that Gilyazov was not a member of Hizb ut-Tahrir, and never took part in activities posing a danger to the public.

Russia has now brought these appalling ‘Hizb ut-Tahrir prosecutions’ to occupied Crimea where they are especially illegal given that Russia has no right to apply Russian legislation on occupied territory, with Hizb ut-Tahrir legal in Ukraine.  65 Ukrainians Muslims, almost all of them Crimean Tatars are either serving horrifically long sentences or are in detention, awaiting flawed trials and equally unwarranted sentences.