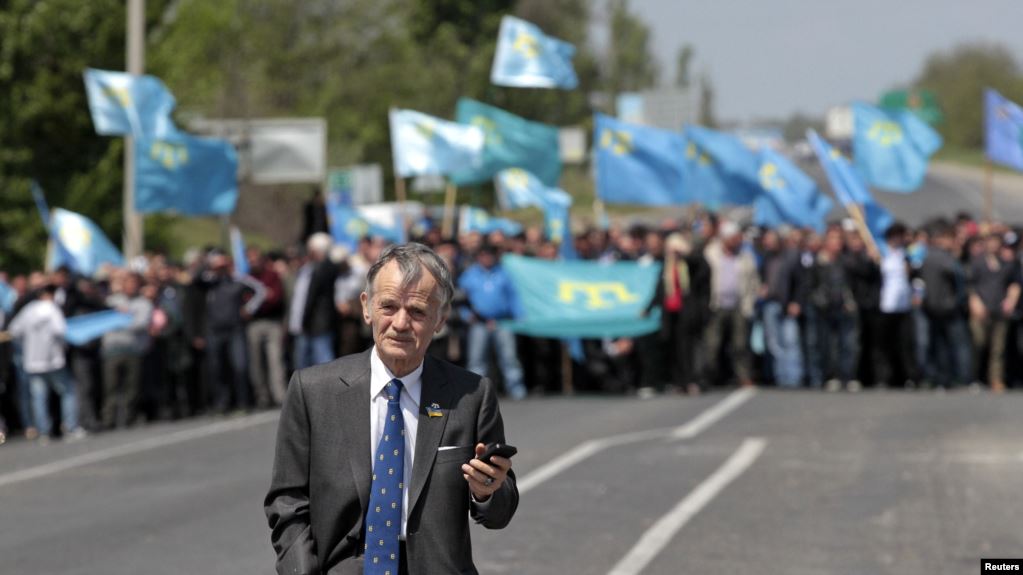 The Mejlis of the Crimean Tatar people has announced plans for a March of Dignity against Violence and Occupation from mainland Ukraine to Russian-occupied Crimea.  According to Refat Chubarov, Head of the Mejlis, or self-governing body of the main indigenous people of Crimea, they hope that this will help the UN, OSCE, EU and other international structures  in implementing the decisions taken with respect to Russia’s illegal occupation of the peninsula,   “We are going home”, Chubarov stresses, after almost six years in which Russia has exiled virtually all leaders of the Mejlis from their homeland, as well as banning the Mejlis itself.

It is probably deliberate that the announcement came on the eve of a Normandy summit between the leaders of Ukraine, Russia, France and Germany planned for 9 December.  Chubarov has said that silence about Crimea at the summit is “a gift” to Russian President Vladimir Putin. Nor are the Mejlis alone in feeling frustration that Ukraine’s leaders have agreed to a meeting without occupied Crimea being on the agenda. Russia’s implacability does not change the fact that its occupation of Crimea has been condemned by the UN General Assembly, all international structures and democratic states, as well as being recognized by the International Criminal Court as an international armed conflict falling under its jurisdiction.  Any western country or international structure seeking to improve relations with Russia by quietly accepting its invasion and annexation of Crimea should be reminded that it is acting in breach of the commitments it endorsed, and the principles it espouses.

Chubarov stresses that Russia has not complied with even one of the international resolutions or orders, and their international peaceful march is aimed at returning Russia to the path of law and ensuring that western structures do not relinquish the position expressed in international documents.

In preparing for this March of Dignity, the Mejlis will turn to to all permanent members of the UN Security Council; member states of the UN Human Rights Committee; the UN’s International Court of Justice; the International Criminal Court;  deputies of various international or European structures, Ukrainian MPs and others.

Preparations for the march will take several months, so the exact date will be provided later.

The Crimean Tatars gained international respect during Soviet times for their unwavering commitment to non-violent protest, and this march too is entitled ‘Peacef against Violence and Occupation. March of Dignity’.

It is, however, vital that the international community provides support as Russia has already demonstrated its willingness to use violent methods against peaceful citizens, including those legitimately seeking to return to their homeland.  Less than two months after invading and annexing Crimea, it banned world-renowned Crimean Tatar leader Mustafa Dzhemilev from Crimea and brought out armed riot police and soldiers against the five thousand Crimean Tatars who came to meet him at the administrative border into Crimea on 3 May 2014.   Criminal charges over the peaceful gathering that day were the first warning of the machine of repression that Russia was launching in the occupied territory.  Since then, Refat Chubarov has also been exiled, and grotesque criminal proceedings initiated against most Mejlis leaders, including the Deputy Head of the Mejlis, Akhtem Chiygoz, who spent almost three years in prison before being released, but into exile.

Russia’s ban of the Mejlis “as extremist” in 2016 was internationally condemned, with all commentators noting that Russia was revenging itself against the Crimean Tatars and their representative assembly for their opposition to Russian occupation.   The UN’s International Court of Justice ordered Russia to withdraw that ban on 19 April 2017, yet it has still not done so.

Russia has essentially flouted every single international court ruling and ignored all calls from UN and other bodies. It has instead carried out unrelenting repression against Crimean Tatars and other Ukrainians who do not conceal their pro-Ukrainian position.  In at least two cases, the political prosecutions, including one that caused the death of 83-year-old world-renowned veteran of the Crimean Tatar national movement, Vedzhie Kashka, have seemed clearly aimed at trying to discredit the Mejlis and Crimean Tatar leaders.

The appalling human rights violations that Russia has brought to occupied territory made the willingness of leading countries in the Parliamentary Assembly of the Council of Europe to forget its sanctions and allow Russia’s reinstatement in June 2019 deeply shocking.

The Mejlis’ initiative should highlight just how unacceptable any capitulation is, and deserves wide support.