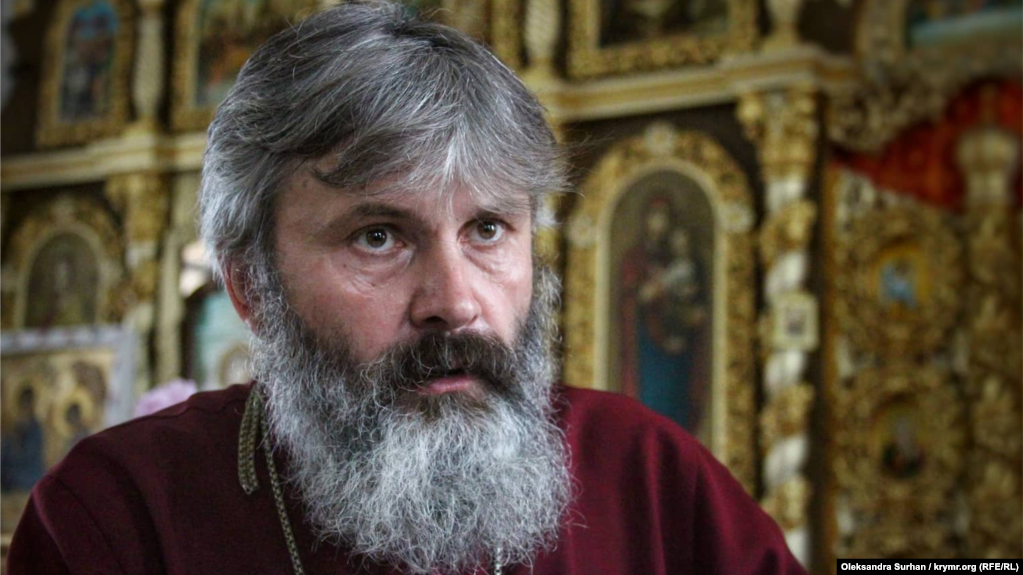 The Cathedral of Saints Vladimir and Olga in Simferopol has been vandalized and robbed in what is doubtless part of Russia’s ongoing offensive against the Orthodox Church of Ukraine and efforts to drive it out of Crimea.

Archbishop Klyment reported on 7 December that the robbery had taken place during his absence and that he had lodged a report with the Russian-controlled police. He arrived back to find that the old wooden doors on the first floor had been removed, with this supposedly in order to replace them with new doors. t was from that floor that the radio equipment was stolen.  The Archbishop demanded from the foreman that the equipment be returned, and was told (bluntly) where to go. Klyment points out that any burglars will now have access to the Cathedral.

This is not the first time that such plundering has taken place, although this is the first time since the UN’s Human Rights Committee intervened on 6 September,  applying its Rule 94 as an interim measure to halt the eviction of the congregation from the Cathedral.  The Committee had been approached for help by human rights lawyer, Serhiy Zayets on behalf of 50 members of the congregation, who complained of persecution by the Russian occupation authorities.  It is this complaint that the Committee is examining, however they clearly understood the urgency of the situation and asked Russia to hold off with the eviction.

How binding such a measure is depends on whether a government abides by rule of law and its international commitments. Russia should have complied, yet this is not the first order from an international court or body that it has flouted.

On 20 September, Zayets reported that the UN Human Rights Committee had noted that the eviction appeared to be ongoing, and reminded the Russian Federation of its obligations. “"The Committee reminds the State party, that a failure to implement the interim measures is incompatible with the obligation to respect in good faith the procedure of individual communications established under the Optional Protocol” to the International Covenant on Civil and Political Rights.

Zayets noted then that the seizure of this last Ukrainian church in Simferopol was taking place at the same time as the OSCE’ Human Dimension Conference in Warsaw which was, this year, particularly full of Russians and some Crimean collaborators, trying to claim that there are no human rights problems in occupied Crimea.

There is nothing to suggest that the Human Rights Committee’s injunction has been cancelled, however on 14 November, an arbitration court in Kaluga (Russia) rejected the Church’s cassation appeal against its eviction.  Zayets has filed a challenge with the Russian Supreme Court.

Klyment reported soon after Russia’s annexation of Crimea that he had been offered 200 thousand USD to vacate the Cathedral in Simferopol.  When that form of corruption failed to work, the occupation authorities turned to Russian-controlled official departments and obedient courts to get the Church out.

The Archbishop also reported on 25 November that he had even travelled to Moscow and left a letter for Russian President Vladimir Putin “about the lawlessness that is going on to destroy the Ukrainian Orthodox Church in Crimea.”

He asked Putin to resolve three issues: 1) registration 2) retention of the Cathedral in Simferopol and 3) retention of all that the Ukrainian community had up till 2014.  He also expressed concern over the 19 November ruling by a Russian court to demolish a Ukrainian Orthodox church in Yevpatoria.   There has been no comment from Putin’s administration.

Publicity is, however, vital.  Moscow is hiding behind claimed ‘land issues’ to try to evict the Ukrainian Orthodox Church from its Cathedral and, in general, to drive it out of Crimea.  In an interview to Krym.Realii at the end of October, the Archbishop noted that for Russia, it had been important from annexation onwards that the Kyiv Patriarchate (in Crimea) should ‘re-register’.

“However we have always been and remain a pro-Ukrainian organization with the clear stand that Crimea is Ukraine.”

“This is the foundation of their life, the only Ukrainian-language centre remaining in Crimea. It is also a spiritual, religious centre. The people who come to our church are conscious (in their decision), they would never go to a Moscow Patriarchate church.  Therefore dissolution of the Church in Crimea will mean that they simply remain on the street, without religious services.  Everybody understands very well that the only Ukrainian centre active in Crimea according to Ukrainian documents is our Church.”

“While we are active here, Ukraine can regard Crimea as Ukrainian.”