Ukraine sends Hague Court details of Russian execution of Ukrainian POWsIntercepted calls prove Russian government control of militants in Ukraine on eve of MH17Russia hides MH17 suspect, then uses him for lies about the disaster and about ‘civil war’ in UkraineHow can Russia deny responsibility for MH17 when it gave up Sentsov, others to get key witness out of Ukraine?MH17 suspect release incriminates Russia, but leaves Ukraine compromisedFamilies of MH17 victims call for honesty and justice from Russia as the lies continueThree out of four MH17 suspects are ‘former’ Russian FSB or military intelligence officersRussian Twitter ‘false flag’ operation to blame Ukraine for MH17 broke all recordsEuropean Court of Human Rights demands answers from Russia over downing of MH17 over UkraineNext step the Hague after Russian military source named for Buk missile that downed MH17Russian TV produces ‘witness’ of Ukraine downing MH17, then quickly removes reportRussian media twist Bellingcat study to find Ukrainian Buk in Donbas before MH17Incriminating Video, Endless Lies and Putin’s ‘Premature’ Tribunal on MH17Russian LifeNews inadvertently told the truth about downed Malaysian airlineMilitants accused of deliberately shooting at Severodonetsk residential areaSent to be shotThe EU’s Opaque Dealings with UkraineWhose anti-Semitic and Homophobic Choice?What should they talk about, Mr Putin?The Peace that chokes Russia
• Topics / Terrorism 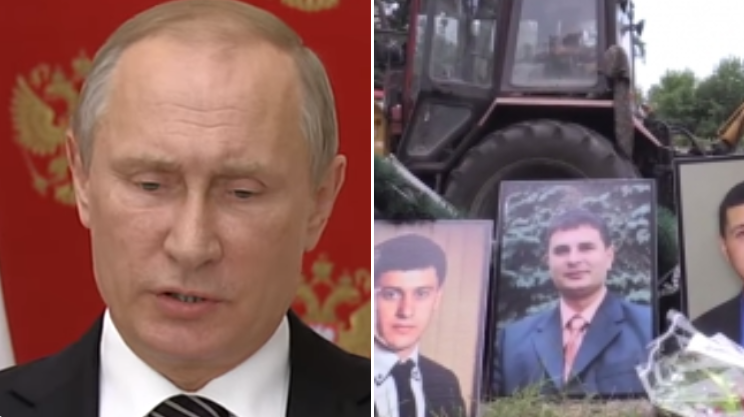 Russian President Vladimir Putin has reiterated the unsubstantiated claims Russia used to justify its invasion and annexation of Crimea, this time with respect to occupied Donbas.  Without Russian control over a significant part of Ukraine’s border,  through which it has been repeatedly observed bringing weapons of death to Ukraine, Putin asserted, there could be a “massacre”, like that at Srebrenica.

There was no real attempt to explain why he was making such a claim less than 24 hours after the Normandy Summit between him, Ukrainian President Volodymyr Zelensky and the leaders of France and Germany.  None was required as he knew that he would not be challenged to explain who the anonymous “nationalists” are who may, he alleges, be stronger than Zelensky.

Putin was marking International Human Rights Day on 10 December with a meeting of his recently purged ‘Human Rights Council’.  While the Council had always been  ignored, its members  had, until the October changes, at least played an important role in pointing out the faked ‘referendum results’ used to justify annexing Crimea and in defending political prisoners. In contrast, on 10 December Valery Fadeev expressed opposition to  an amnesty for the Moscow Case political prisoners imprisoned over peaceful protests,  Some people willing to speak out over human rights abuses have remained.  Yury Kostunov raised the subject of Russia’s ongoing persecution of people (in both Russia and occupied Crimea) for alleged involvement in the peaceful pan-Islamist Hizb ut-Tahrir movement.  Putin did not interrupt him, but then countered with flagrant lies about Hizb ut-Tahrir, before justifying what are effectively horrific sentences for a person’s religious and political views.  There was no opportunity to challenge his words, despite their glaring distortion.

One of the people whom Putin added to his new council was Kirill Vyshynsky, the Ukrainian who had been facing treason and other charges in Ukraine over his propaganda work as director of the Russian-funded RIA Novosti Ukraine until being released as part of the September exchange of prisoners between Moscow and Kyiv.

Vyshynsky has returned to his role as anti-Ukrainian propagandist, and his words at the council meeting were very much in this mode.

Putin reacted by referring to the Normandy Summit held the previous evening.  After mentioning discussion about the controversial demand for an amnesty law, he went on to mention the substantial part of the Ukrainian – Russian border not under Ukrainian control.

One of the key moments for most Ukrainians during the press conference on Monday evening was when President Zelensky clearly articulated Ukraine’s position, namely that there can be no local elections, as Moscow is pushing, while Ukraine does not have control of its own border.  This is evidently not something that Russia will tolerate as the so-called ‘Donetsk and Luhansk people’s republics’ only exist because of the steady supply of weaponry, military hardware and other material supplies from Russia, as well, almost certainly, as the flow of mercenaries and Russian military reinforcements.

The latter may be compelling arguments for the Kremlin, but they sound bad, so, just as he did over Crimea, Putin has come up with a fictitious ‘massacre’ that Russia’s occupation of the Ukrainian border is supposed to prevent. Putin’s words bore no scrutiny, but then he knew that they would go unchallenged.  He said “we have seen how President Zelensky holds discussions with the nationalists. It’s unclear who’s stronger, what will happen then and who will lead them, these nationalists, when they enter that territory without guarantees to people.”

Claims of “rabid nationalist hordes” seizing control in Kyiv and “genocide of Russian-speakers” in Donbas were standard fare in 2014, and have, unfortunately, been fed to people in the Russian-controlled ‘republics’ ever since. At the end of 2014, a human rights mission visited some of the cities in Donbas which the militants had been forced to flee.  They reported that many inhabitants had initially feared the entry of the Ukrainian Army because of all this propaganda, and had swiftly understood that there were no grounds for such fears.  In discussing the results of a survey carried out by the authoritative Democratic Initiatives Foundation [DIF] and Razumkov Centre in liberated areas, DIF Director Iryna Bekeshkina noted that, while ‘nationalism’ was a real bogey for people in Donbas, people in the area were more frightened of the return of the ‘DPR’ militants, than they were of Right Sector, the nationalist party which Russia demonizes.

There was nothing to back Russia’s claims that it was preventing a ‘bloodbath’ in Crimea, and there are none in occupied Donbas.  While there may well prove to be human rights crimes that specific Ukrainian military men must answer for, it is Ukraine that has approached the International Criminal Court accepting its full jurisdiction over the conflict in Ukraine, while Putin has sought only to deny this.

It is Russia that is giving refuge to the convicted killers of 16-year-old Stepan Chubenko who was seized and then tortured by militants because of the Ukrainian ribbons on his rucksack.

Moscow has been systematically obstructing the Joint Investigative Team’s investigation into the downing by a Russian BUK missile over occupied Donbas of Malaysian airliner MH17.  It is not only providing protection for the four suspects, three of whom are Russian former or current FSB or military intelligence officers, to be tried in absentia in March 2020, but also actively prevented the extradition to the Netherlands of MH17 suspect Vladimir Tsemakh.  This is probably not surprising since Tsemakh admitted to involvement in the hurried return of the BUK missile carrier to Russia where it is known to have come from the 53rd Anti-Aircraft Missile brigade which is a unit of the Russian army from Kursk in the Russian Federation”.

One of the MH17 suspects, Igor Girkin, has also openly admitted to extrajudicial executions in Donbas, without the Russian prosecutor, who seeks 20-year sentences against Crimean Muslims for their faith, having shown any interest.    The list of real crimes can be continued.

Russia has not only used the uncontrolled part of the border with Ukraine since 2014 to bring the BUK missile launcher which downed MH17 and then to try to hide it.  Since August 2014 there have been numerous sightings of significant flows of military trucks, sometimes with the military hardware visible.

While most western journalists appeared determined to continue their “Kyiv says, Moscow denies” narrative about the conflict in Donbas, Polish journalists were filming huge convoys of Russian military trucks, equipment and men heading towards the uncontrolled part of the border with Ukraine.

Even if we assume – and there are no grounds for doing so – that Russia’s so-called ‘humanitarian convoys’ to occupied Donbas do contain humanitarian supplies, these are not the only supplies that Russia is sending into the occupied territory.  Other convoys of military trucks have been spotted on a large number of occasions by OSCE Special Monitoring Mission drones travelling by night, on dirt roads in places where there are no formal border crossings.  We do not need to merely surmise what is being transported into Ukraine on these military trucks.  On 27 October 2018, a UAV was first jammed, and then brought down, after it spotted a Russian military weapon system, as well as “a convoy of seven trucks on a dirt road near the border with the Russian Federation where there are no border crossing facilities”.

It is likely that the real number of such convoys is much higher, but a list of some of them can be found here: Russia brings ‘humanitarian’ convoys to Ukraine by day, military trucks carrying death by night.

It is Putin’s Russia that brought carnage and suffering to Ukraine.