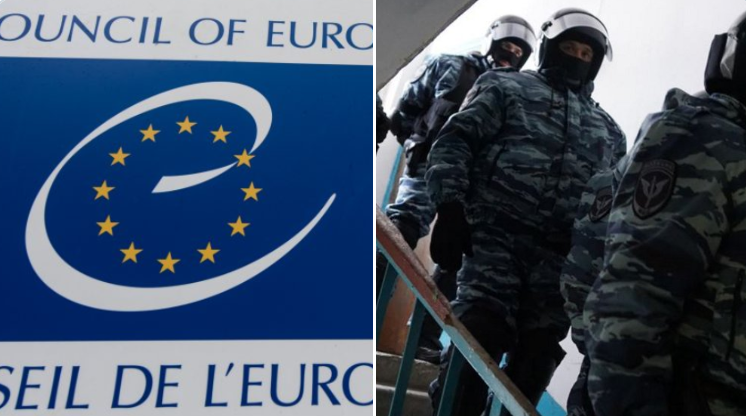 Rosfinmonitoring, a body involved in Russia’s systematic persecution of Ukrainians from occupied Crimea and Russians for their religious or political views appears to be working in cooperation with the Council of Europe.  That is certainly the impression given by the CE logo under ‘international cooperation’ on the official website page  http://fedsfm.ru/ )

The Council of Europe itself states that authorization is needed for the use of this logo, and that permission “will not be granted if such use is contrary to the Council of Europe’s values and principles,”   While countering terrorism may well correspond to CE values, political persecution does not, yet despite having been warned about the highly specific nature of Rosfinmonitoring’s list of ‘terrorists’ and ‘extremists’, the logo remains.

Did the Council of Europe not notice or not think it of importance that the list to this day includes Ukrainian filmmaker, Oleg Sentsov who was serving a 20-year sentence for his opposition to Russia’s annexation of Crimea when awarded the European Parliament’s Sakharov Prize in 2018?

The list includes Crimean journalist Mykola Semena and Crimean Tatar activist Suleyman Kadyrov.  Both of them were convicted by illegal occupation courts of ‘making public calls to action aimed at violating Russia’s territorial integrity’.  Both had stated, in full agreement with international law, the United Nations and the Council of Europe itself, that Crimea is Ukraine.

Refat Chubarov, the Chair of the Mejlis, or self-governing body, of the Crimean Tatar people, and Ilmi Umerov, one of his deputies, are also on the list.  Umerov was released into exile in October 2017, together with Mejlis leader and political prisoner, Akhtem Chiygoz, as part of an exchange involving Turkey who is believed to have handed over to Russia two state killers suspected of assassinating a Chechen leader.  Umerov had been sentenced to two years’ imprisonment, also for supposed ‘calls to violate Russia’s territorial integrity’ because he called for stronger sanctions.  Chubarov was placed on the list after being forcibly exiled from his homeland in July 2014, with the charges also linked with him legitimately calling for an end to Russia’s illegal occupation of Crimea.

Any association with the Council of Europe is particularly shocking given that the list includes at least 68 political prisoners from Crimea, most of them Crimean Tatar, who have been convicted of, or are charged with involvement in organizations that are completely legal in Ukraine.  A number of them, such as human rights activist Emir-Usein Kuku, civic activist Seiran Saliev, Crimean Solidarity Coordinator Server Mustafayev and journalist Remzi Bekirov, had long faced harassment for monitoring and reporting on human rights abuses.  When that did not silence them, they were arrested and charged, under Russia’s ‘terrorism’ legislation, with ‘involvement’ in the peaceful Hizb ut-Tahrir party which is legal in Ukraine and most countries.  As of the end of 2019, Russia is using such ‘Hizb ut-Tahrir’ charges to imprison a very large number of civic activists and journalists, with all of them added to the ‘List of ‘terrorists’ and ‘extremists’.

At the very least three Crimean Tatars on the list (Edem Kadyrov; Dilyaver Hafarov and Fevzi Sahandzhy) are serving sentences for alleged involvement in a legal Ukrainian organization (the ‘Noman Çelebicihan volunteer battalion’) in mainland Ukraine.  At least two other Ukrainians from Crimea, Serhiy Filatov and Viktor Stashevsky, have been added to the list and are facing ‘extremism’ charges due to Russia’s internationally condemned criminalization of the Jehovah’s Witnesses.

With total disregard for the presumption of innocence, Russia adds all of these victims of political persecution to the list long before any verdict in their cases.  Such inclusion imposes ever greater difficulties on the families of political prisoners, with bank accounts, etc. virtually frozen.

To reiterate, these men are imprisoned on charges only of involvement in legal organizations, and are not accused of any internationally recognized crime. Almost all are currently imprisoned or facing charges under Russian law by an occupying state, in grave breach of international law.

There have been numerous resolutions demanding the release of Russia’s Ukrainian political prisoners, including from the Parliamentary Assembly of the Council of Europe (the 28 June 2018 Resolution on Ukrainian citizens detained as political prisoners by the Russian Federation, to name just one).

Even if these cannot keep up with the ever-increasing number of political prisoners, currently held in occupied Crimea or Russia, it is hardly difficult to find details of them from Ukrainian human rights groups or from the authoritative Russian Memorial Human Rights Centre.

Before effectively endorsing the ‘work’ of Rosfinmonitoring, the Council of Europe could surely have taken a little time to compare the list of people whom the Russian body is accusing of ‘extremism’ or ‘terrorism’ with Memorial HRC’s lists of political prisoners and prisoners of conscience.  They would have discovered that there are also a considerable number of Russian political prisoners on the list.

Shortly after an exchange of prisoners, resulted in the return to Ukraine of several of the political prisoners on the list, the FSB arrested another Ukrainian in occupied Crimea.  61-year-old Oleh Prykhodko had never concealed his opposition to Russia’s occupation of Crimea, and is now paying a huge price for this, with the case against him almost mirroring those against one of the Ukrainians released, Volodymyr Balukh.  He has already been placed on Rosfinmonitoring’s list.

The number of political prisoners, seized for openly stating that Crimea is Ukraine or for reporting on human rights abuses can only increase while the peninsula remains under Russian occupation.  The list of victims of persecution, already formidable, can only get longer, but this should not be with the Council of Europe’s endorsement.