Abducted 16-year-old was forced to clean up after Russian invaders" torture of Ukrainian POWs and hostagesRussia abducts 25 volunteers delivering humanitarian aid to Mariupol, threatens to put them ‘on trial’ Russia extends terror and abductions from occupied Crimea and Donbas to all of Ukraine Russian invaders torture and threaten to kill civilian hostage in revenge for their military losses Ukrainian POWs and abducted civilian hostages illegally imprisoned in Russian-occupied Crimea Russian invaders abduct Mayor of Prymorsk Oleksandr Koshelevych after first taking his elderly father hostage Russian Rule of Lawlessness in Occupied Crimea and DonbasRussian invaders take Mariupol intensive care hospital and its patients hostage Russia kills Minsk Agreement, with lives of over 300 Ukrainian hostages and POWs in danger Russia is already holding many Ukrainian POWs without any declaration of warRussian proxy Donbas ‘republic’ threatens death sentence after torturing young father into ‘confessing’ to being a Ukrainian saboteur Crucial law adopted to help Russia’s Ukrainian political prisoners and hostagesUkrainian seized and tortured by Donbas militants after returning for his elderly mother Ukrainian accused of torturing hostages at Russian-controlled Izolyatsia secret prison flees to France and "asks for political asylum’Ukrainian hostage tortured with screws through the knees by Russian-controlled Donbas militants Donbas militants seize Ukrainian teacher trying to help her ailing mother Volunteer imprisoned by Donbas militants for helping orphaned children receives Ukraine’s National Human Rights Defender award Donbas hostages tortured for a Russian propaganda program against Ukraine Mother with grave health issues imprisoned by Russian-controlled militants for trying to save her sonFears for the life of tortured Ukrainian hostage held by Russian-controlled Donbas militants
• Topics / The right to liberty and security 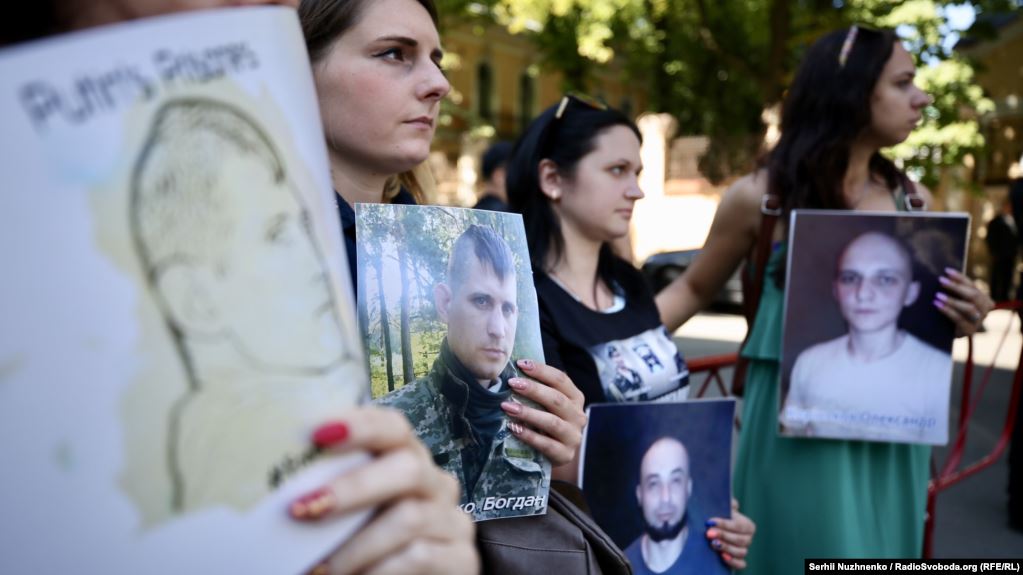 One of the few tangible achievements from the 9 December Normandy Summit was an apparent agreement on exchange of prisoners.  Not, of course the “all for all” specified in the Minsk Agreement, and not just because the agreement did not cover the huge number of Crimean Tatar and other Ukrainian political prisoners held in Russia and occupied Crimea.  Even accepting that this exchange was to be solely about hostages and POWs held by the self-proclaimed and Russian-controlled ‘Donetsk and Luhansk people’s republics’ [DPR, LPR] there was to be only an exchange of “all confirmed prisoners”.  That translates into a figure of 77 Ukrainian hostages and POWs out of the 250 whom Ukraine’s SBU [Security Service] are aware of.

There appear to be problems even with this strictly limited exchange.  The first meeting in Minsk since the Summit ended in failure on 18 December, after Russia and the so-called ‘republics’ insisted that all criminal charges needed to be wiped from their candidates for exchange.  This is total hypocrisy given that Russian has not done the same, and is continuing its ‘criminal charges’ against the 24 Ukrainian POWs it seized after attacking 3 Ukrainian naval vessels near Crimea on 25 November 2018 and only released, as part of an exchange, on 7 September 2019.  While none of the hostages whom Ukraine’s government has placed on the list has committed any internationally recognized crime, this is not true of the majority of people whom the DPR / LPR militants want back, and Ukraine has released the men, but not waived their charges.

The Russian newspaper Kommersant, citing its own, unnamed, sources, reports that around 40 of the people on the militants’ lists do not want to return to DPR/LPR.  While some do not want to return if they leave a criminal record unwiped, others clearly wish to remain in government-controlled Ukraine.  While Kommersant and its sources in the so-called ‘republics’ spoke of the need to check that the prisoners are voluntarily refusing to be on the list, Ukraine’s SBU has previously been accused of putting pressure on prisoners to agree.  It was while Valeria Lutkovska was Human Rights Ombudsperson that she stipulated that nobody must be handed over to DPR / LPR against their will.   Lutkovska is now representing Ukraine at the negotiations at Minsk over the exchange.  She reports that an exchange in 2019 is still possible if what she calls technical issues can be resolved.

The exchange will still be of those ‘confirmed’, with the fate of those whom the militants are not ‘confirming’ frighteningly unclear.  According to Ukraine’s representatives in the Trilateral Contact Group, they do give the names of many other hostages, but the militants refuse to confirm them.

Radio Svoboda reports that one of the Ukrainians whom the militants are silent about is Anatoly Arkhipov, an ambulance driver from Krasnohorivka   Arkhipov, who has 8 children, set off in 2017 to visit his son in occupied Donetsk.  He was seized there by militants and has been held in the Donetsk SIZO [remand prison] ever since, accused, as are the vast majority of hostages, of ‘spying for the Ukrainian SBU’.  A humanitarian mission has written several requests for Arkhivpov to be released. The SBU have them on their list, but the DPR militants say that he “is not verified”, with this seemingly because his ‘trial’ is not yet over. A number of the hostages and POWs whose cases have been reported here have also not been ‘verified’.

Oleh Kotenko, the coordinator of ‘Patriot’, a group working for the release of prisoners, believes that there are several reasons why ‘DPR/LPR’ do not confirm some of the hostages  The first he mentions is that the Russian security service (FSB) do not want to release military specialists or civilian hostages who did help the Ukrainian SBU and whom the FSB has not been able to recruit.  This seems a rather dangerous assertion since there is no reason to assume that those released during the last exchange, on 27 December 2017, were ‘recruited’.  It has, however, long been suspected that it is the FSB who decides on inclusion of at least some of the people on exchange lists. At least three military men – Serhiy Glondar; Oleksandr Korinkov and Bohdan Pantyushenko – have now been in militant captivity for nearly five years, and it is likely that Russia is treating them as ‘trophies’ for especially hard bargaining. Russia’s release of Ukrainian filmmaker Oleg Sentsov, journalist Roman Sushchenko and 33 other political prisoners may well have been because they needed to get MH17 suspect Vladimir Tsemakh out of the reach of the international investigators because of the incriminating evidence he could provide.

In October 2019 there was a spate of grotesque ‘sentences’ in ‘DPR’ against POWs like Pantyushenko, and imprisoned journalist Stanislav Aseyev.  There had seemed a chance that this flurry of activity was in preparation for an exchange, however for now the families of (at least) 250 Ukrainians can only wait anxiously.