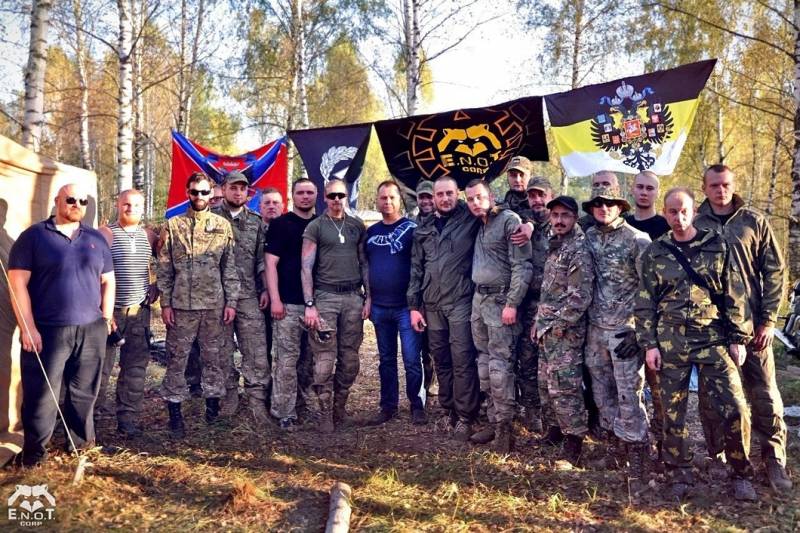 The so-called ‘ E.N.O.T Corporation’, a once lavishly-funded Russian ‘private military company’ that helped Russia seize control of Crimea and fought in Donbas has run into trouble with the Russian enforcement bodies, although not over its killings in Ukraine. The Russian Investigative Committee claims that E.N.O.T men, under the leadership of two Russian FSB officers, took part in extortion and robbery in Russia, and many of them are now in custody over these charges. It seems likely, in fact, that this is a crackdown, not for criminal activities, but for their leaders’ conflict with their Kremlin administrators.

There are numerous illegal armed formations  receiving suspicious amounts of funding, so the disappearance of E.N.O.T Corp. fighters and their ‘military-patriotic’ camps teaching young kids how to kill may not make a significant difference.  The criminal proceedings are, however, useful for the incriminating details already revealed.  The Russian newspaper Kommersant reports, for example, that in their testimony, defendants have identified one of the main figures as a Russian GRU or military intelligence officer, called Denis Karaban (‘Belka’).  He is said to have helped them on what they described as “humanitarian work trips” to Donbas. The lawyer representing another member, Vasily Minchik, says that his client is a military serviceman who has received state and departmental awards “for participation in humanitarian operations on the territory of foreign states”

Although at least one of the men denies the charges of involvement in criminal activities, the fact that Majors Alexander Mrishchuk and Anton Baryakshev are (or were) FSB officers is not in question.  it is likely that efforts are now underway to ‘persuade the defendants who exposed Karaban and Minchik’s military status to change their testimony.  Russia has a long track record of illegally using GRU or ordinary Russian soldiers in countries against whom it has not declared war.  When officers get caught  as were two GRU officers (Yevgeny Yerofeyev and Alexander Aleksandrovich) in the Luhansk oblast in May 2015, huge pressure is brought to bear to get them to deny their military status and claim that they had left the military to become ‘volunteers’.  Given the testimony of many ex-hostages, and the fact that three of the four first men due to be tried (in absentia) over the downing by a Russian BUK missile over occupied Donbas are Russian former (or current)  FSB or GUR, there is no obvious reason to doubt that military men did play a role in E.N.O.T at the time when the latter was being used for Russia’s invasion of Crimea and undeclared war against Ukraine, as well as for its military activities in Syria.

E.N.O.T Corps was one of several ‘private military companies’ whose fighters were deployed for Russia’s aggression against Ukraine.  In describing the turn-around in the fate of E.N.O.T members in February 2019, Novaya Gazeta noted that, with respect to Crimea, “Russia officially took part only in ‘ensuring safety’ in carrying out a referendum.  There was, of course, an unofficial part of the work which was financed by ‘patriotically minded businessmen’ and carried out by members of various military-patriotic organizations. Obviously under the directions of the FSB”.

In 2014, E.N.O.T fighters were needed in Crimea.  In 2015, they were deployed, together with Russian military personnel, in the battle to gain control of Debaltseve.  They also carried out a purge in Spring, 2015, of a ‘Cossack’ formation which was competing for power with the then leader of the so-called ‘Luhansk people’s republic’, Igor Plotnitsky.

The organization’s address was in the very centre of Moscow, and their website, which has now been removed, openly boasted of the ‘military-patriotic’ training sessions in Russia.  In September 2015, around 300 young Russians took part in a camp for training fighters in the Moscow region, with their instructors including two prominent neo-Nazis who in 2014/15 fought on the side of the Kremlin-backed militants in Donbas.  Alexei Milchakov, who had been convicted in his native St Petersburg over the sadistic killing of puppies and calls on fellow neo-Nazis to kill down-and-outs, also went to Donbas on what was called a ‘humanitarian work trip’.  He has admitted in a skype interview that he received money for his mercenary services, and also posted photos of himself over the bodies of Ukrainian soldiers he had killed. It looks as though his killing ‘services’ were deemed grounds enough for waiving the criminal charges against him back in his native Russia.

Milchakov and fellow neo-Nazi militant  Jan Petrovsky (Veliki Slavian), although themselves not E.N.O.T. Corps members, were valued ‘instructors’ at the 2015 training camp, which took place under the patronage of Alexander Borodai, one of the Russian founders of the so-called ‘Donetsk people’s republic.  The training course involved seminars and practice in sniper fire; using a pistol or machine gun; martial arts; field medicine, etc.  Kids who looked 13 or 14 at most were taught to shoot, move and take aim without being observed, to move injured comrades, etc. They were also subjected to ‘patriotic’ education of a far-right, imperialist bent.

A similar event in September 2016 was called the ‘II Dmitry Donskoy International Military-Patriotic Camp’ and also claimed that around 300 children and young people were involved, including from the Donetsk and Luhansk oblasts of Ukraine, as well as Belarus.  A video which has now been removed, but can probably be found cached, stated that those finish the training may if they wish take part in “humanitarian aid to Donbas”, as well as “helping the local police fight street crime”.  At least Petrovsky was involved in training children as young as 8, with the ‘skills’ learned including shooting from pistols and machine guns, throwing grenades, and survival skills in a field where active fighting is taking place.  That camp was also clearly with the involvement of E.N.O.T Corps, as well as the ‘Rusich’ military band which Milchakov and Petrovsky led in Donbas.  There was little attempt to conceal the euphemistic nature of the term ‘humanitarian aid’ with E.N.O.T commander Roman Telenkevich handing out awards at the beginning to those young participants who took part in the active phase of the conflict in Donbas which he appears to “hope will be” again.  On receiving their ‘crosses’, the young men shouted “I serve my fatherland, ENOT and the Orthodox Faith”.

The wind appears to have changed for this far-right outfit after Telenkevich came into conflict with Borodai and announced that he was leaving the so-called ‘Union of Volunteers of Donbas’.  It transpired very quickly that the days when Telenkevich can be seen receiving an award from Sergei Aksyonov, the Russian-installed ‘leader’ of occupied Crimea, for his services were over.  He and his E.N.O.T comrades found themselves designated as ‘criminals’ – essentially by the same bodies that had overseen their criminal behaviour in support of Russia’s aggression against Ukraine.