Ukraine is abandoning its Church and believers in Russian-occupied Crimea 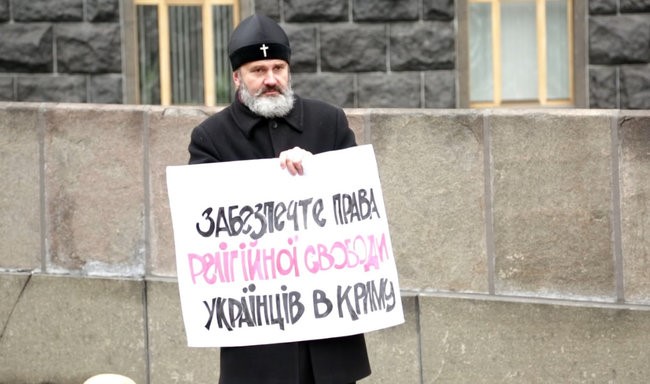 For almost six years, the Russian occupation regime has been trying to drive the Ukrainian Orthodox Church out of Crimea, with the reaction of Ukraine’s leaders varying from expressions of deep concern to very deep.  Simple practical measures to protect the Church have not been taken, and it is small wonder that Archbishop Klyment and believers in Crimea feel abandoned. Nor is the problem only with the Ukrainian Church.  The Archbishop says bitterly that what Russia didn’t succeed in doing in 2014, the Ukrainian authorities have completed.  Nothing has been done to ensure education online, although children want to study in Ukraine.  In almost six years, he adds, not one document has been prepared to regulate ways of protecting Ukrainians’ culture in Crimea.

On 10 December, the Archbishop went on hunger strike outside Ukraine’s Cabinet of Ministers, hoping in this way to force them to act.  It did not, and  Klyment finally heeded a request from Church leaders to end the hunger strike.  He is certainly too important for the Church in Crimea, but so too is Ukraine’s proactive support, and that is lacking.

Russia’s persecution of the Ukrainian Orthodox Church began soon after its invasion and annexation. Open repression might well have prompted further sanctions, and the occupation regime focused instead on demanding unacceptable ‘re-registration’ under Russian legislation and on depriving the Church of its land and places of worship. The Russian occupiers claimed that the land is ‘federal Russian property’ which the Archbishop is illegally occupying.  This is evident nonsense, however there needed to be an unambiguous response from the Ukrainian government since the land was under effectively permanent lease for a nominal fee, not the Church’s private property.  This makes it much more difficult to legally protect, at least at an international level.  The Archbishop made repeated approaches, however Ukraine’s Ministry of Culture kept saying that they couldn’t do anything since Crimea was not under their control, while another ministry told him that there were no mechanisms, and no laws in place.

“So what have you been doing for the last almost six years?”, Klyment asks, and explains that he went on hunger strike to demand that the Ukrainian authorities resolve the situation in a way that can guarantee the safety of believes of the Orthodox Church of Ukraine in Crimea.  “If there is no Diocese and no Cathedral (of Saints Vladimir and Olga), it will not be possible to speak of anything Ukrainian having been preserved in Crimea.”

At least part of the solution is really very simple. Ukraine’s government should give the Cathedral of Saints Vladimir and Olga to the Orthodox Church of Ukraine.  The fact that Russia is flouting international law through its occupation of Crimea does not mean that Ukraine should help it plunder Ukrainian property and destroy the Church.  The lack of legal clarity and ownership of the land in question is playing into Moscow’s hands.

The Archbishop says that he has been fighting for this since 2014. “You get the impression that Ukrainian officials have abandoned all of us and we’ve been left alone.”

“If Crimea is Ukraine, the Government should make efforts and the community should feel the support of the Ukrainian state. Otherwise, openly state that the peninsula doesn’t belong to us and we’ll know that we need to search for other ways of ensuring our survival.”  “Instead, we’re told that it’s better not to raise this subject at all so that nothing happens.  That is the Ukrainian government’s official position.”

“I am a native Crimean, of the sixth generation.  I am a Ukrainian and I will not leave Crimea.  This is my homeland. Most of the community in Crimea has been retained and nobody is planning to move, as otherwise there will not be a Ukrainian Church in Simferopol.”

The Archbishop says that, if anything, the number of believers has slightly increased. If before 2014, people might sometimes come to services, sometimes not, now families come to them, as they understand that the Church’s existence is in jeopardy.  “People want to go to a Ukrainian Church”.  “We have no Ukrainian radio, no Ukrainian television, Ukrainian school, however the Church has remained. It is to the Church that Ukrainian Crimeans come to retain their national identity and culture.”

There are currently nine Church centres throughout Crimea where there are regularly services.   Although all faiths, except the Russian Orthodox Church, have faced degrees of harassment or persecution since Russia’s annexation, however it was the Ukrainian Orthodox Church that first came under attack.  This was almost certainly because of ts openly pro-Ukrainian position and its public statement on 11 March 2014 condemning Russian occupation of Crimea.

Klyment reported soon after annexation that he had been offered 200 thousand USD to vacate the Cathedral in Simferopol.  When that form of corruption failed to work, the occupation authorities turned to Russian-controlled official departments and obedient courts to get the Church out.