Release of suspected Maidan killers in prisoner exchange will help Russia destabilize UkraineEx-Berkut officer accused of mass Maidan killing released from detention33 Maidan crime suspects still work in law enforcement bodies, 10 in high positionsKey evidence against Maidan killers in danger of being destroyedWhy is Lutsenko trying to destroy the only department truly investigating Maidan crimes?Russia claims Ukraine promised to terminate the trial of suspected Maidan killers freed in prisoner exchangeRussia’s ‘all for all’ exchange: those who were not returned to UkraineRussian-controlled Donbas militants seize pensioner and his familyProminent Ukrainian activist Roman Ratushny killed defending Ukraine against Russian invaders Life sentence in Ukraine’s first war crimes trial since Russia’s total invasion but questions remain Imprisoned for seven years as Russia"s revenge for Ukraine’s Euromaidan Yanukovych phoned Russian President Putin 12 times during the mass killings on Maidan Former Ukrainian Interior Ministry official to face trial over Maidan killings after imprisonment in Russia Former Ukrainian special forces officer to go on trial over Maidan killings Putin signs decree to let Ukrainian traitors and fugitives from justice hold public office in RussiaEx-Berkut officer on trial for Maidan killings reinstated in Ukraine’s police forceFirst Berkut police jailed for involvement in savage dispersal of Maidan activists Ukrainian jailed in Russia’s revenge for Maidan punished because of back pain Will anyone answer for the killings on Maidan?ECHR finds Ukraine breached the right to life over Maidan killing and multiple other violations
• Topics / The right to life
• Topics / The right to a fair trial
• Topics / Human Rights Violations associated with EuroMaidan 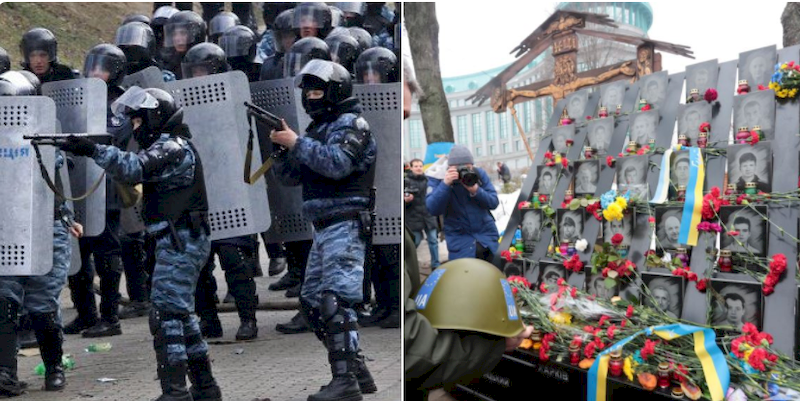 The Kyiv Court of Appeal has released from custody three former Berkut officers charged with the mass murder of 48 Maidan activists, and freed from house arrest two other defendants.  Since Ukraine’s Prosecutor General Ruslan Riaboshapka has also dismissed the prosecutors leading the case, it appears that the worst fears of the victims’ families and their lawyers were justified.  This ‘appeal hearing’ which dragged out over two days was, effectively, a staged performance with the result read out by judges, but commissioned by politicians in order that the men be released as part of the exchange of prisoners scheduled for 29 December.

“I have often written about hostages … and understand what a difficult choice this is, especially knowing who it is that they want to exchange the former Berkut officers for.

However why can Prosecutor General Ruslan Riaboshapka, who is nonetheless a political figure and who answers to parliament, not come and explain why he has taken such a decision?  Why are prosecutors, who should be apolitical, forced to carry out a political commission? Why will he not even pick up the receiver to explain, and is simply in hiding? What was the re-attestation of prosecutors for at all?”

Stanko was referring to the three prosecutors, all of whom have just undergone such ‘re-attestation’, who are formally to replace the prosecutors from the recently dissolved Special Investigations Department who had been involved in the case from the outset.

Honesty would have been appropriate, If only because judges in Ukraine are already viewed with distrust, and here presiding judge Margarita Vasilyeva, together with Viktor Gabriel and Anatoly Orel were clearly used to provide the required ruling.  A letter published in the media earlier on 28 December made it quite clear that all was proceeding due to political arrangements over an exchange.

The pretence is truly offensive, with all of the defendants: Serhiy Tamtur; Serhiy Zinchenko; Pavlo Abroskin; Oleh Yanishevsky and Oleksandr Marynchenko  still officially under ‘a personal undertaking’ to appear for court proceedings.

This was not the only judicial travesty on 28 December.  A court in Kharkiv sentenced three men: Serhiy Bashlykov; Volodymyr Dvornikov and Viktor Tetyutsky – to life imprisonment for a savage terrorist attack and freed all the men from custody – for their part in the exchange.  The men had targeted participants in a Unity March on the first anniversary of Euromaidan on 22 February 2015 and killed 15-year-old Danil Didyk; 18-year-old student Mykola Melnychuk; Ihor Tolmachev, a physicist and one of the coordinators of Kharkiv Euromaidan and police colonel Vadim Rybalchenko.

The hostages and POWs held by the Russian-controlled ‘Donetsk and Luhansk people’s republics’ are held in horrific conditions, with most, if not all, tortured. Some, like POWs Bohdan Pantyushenko, Serhiy Glondar and Oleksandr Korinkov, have been in captivity for five years.  Few of us would want to tell them and their families that their release is not important.

President Volodymyr Zelensky has, however, talked a great deal about transparency and about asking the Ukrainian people what they think, yet all of the above has been carried out in secret.  It was learned only that agreement had been reached with Russian President Vladimir Putin about an exchange this year, which would not include the nearly 100 political prisoners held in Russia and occupied Crimea.  Although it was clear that the Kharkiv terrorists were to be included earlier, there have been conflicting reports about whether the former Berkut men were to be handed over.

It seems likely that this was done quite deliberately, not least because of the predictable crowd that is gathering outside the SIZO [remand prison] in Kyiv from where the men are due to be released.

It is worth noting that public opinion surveys have consistently shown that a majority of Ukrainians are against the amnesty for all participants in military action against Ukrainian soldiers which Russia is insisting on.  The events on Maidan preceded Russia’s military aggression, and should not even be a part of any exchange, however it seems likely that there would be widespread opposition to the release of men accused of heinous crimes.  The situation is particularly baffling since the number of Ukrainians due to be released on 29 December is far lower than the minimum 250 hostages and POWs held in Donbas, not to mention all of the Crimean Tatar and other Ukrainian political prisoners directly held by Russia. Why, then, could Ukraine’s leaders not insist on at least waiting until the expected end of the five former Berkut officers’ trial in 2020?  Now, if they are indeed exchanged, there will not even have been a court verdict.

As reported, on 23 December, the Advocacy Advisory Panel, and the NGO ‘Families of Nebesna Sotnya Heroes [the slain victims] addressed an appeal to President Zelensky in which they stressed that the five ex-Berkut officers: Abroskin; Marynchenko; Tamtur; Yanishevsky and Zinchenko are neither participants, nor victims of the conflict in eastern Ukraine.  The crimes that they are charged with have nothing to do with the conflict, nor with separatism.  All of them are, in addition, Ukrainian citizens.  “Their release as part of an exchange aimed at resolving the conflict in eastern Ukraine does not therefore comply either with international law or the stated objectives, or common sense.”

Their release, they pointed out, would make it impossible to conclude this main court trial over Maidan crimes, one on which the families of slain victims had pinned their hopes for justice.

“The deliberate and lawless destruction of this trial by removing the defendants will cause irreparable damage both to the victims, and to Ukrainians’ hopes of justice and of trust in the justice system in Ukraine.  It could also lead to division in society, a wave of protests and social upheavals”.

They were not alone in believing that Russia was deliberately seeking the collapse of the trial in order to force a reassessment of the Revolution of Dignity and the pro-European course which over 100 Maidan activists died affirming. While the former Berkut officers were not a part of the military conflict in Donbas, Russia’s insistence on their release is assuredly part of its ongoing efforts to divide and destabilize Ukraine.