Russia’s ‘all for all’ exchange: those who were not returned to UkraineSuspected Maidan Berkut killers freed on eve of Donbas hostage exchangeRelease of suspected Maidan killers in prisoner exchange will help Russia destabilize UkraineEx-Berkut officer accused of mass Maidan killing released from detention33 Maidan crime suspects still work in law enforcement bodies, 10 in high positionsKey evidence against Maidan killers in danger of being destroyedWhy is Lutsenko trying to destroy the only department truly investigating Maidan crimes?Silence abets Russia in torturing and risking the lives of Ukrainian hostages and POWs in occupied DonbasRussia kills Minsk Agreement, with lives of over 300 Ukrainian hostages and POWs in danger Ukrainians tortured and imprisoned in Donbas for supporting Ukraine, with Russia blocking their release Elderly Donetsk hostage with hip fracture sentenced to 17 years for supporting Ukraine Russian-controlled militants sentence 70-year-old pensioner to 17 years for ‘spying’ after torturing him and his family
• Topics / The right to liberty and security 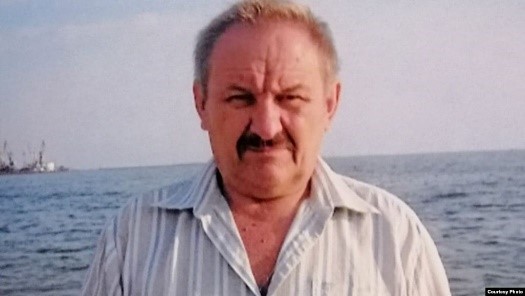 68-year-old Vitaly Atamanchuk remains imprisoned in the Russian proxy ‘Donetsk people’s republic’ almost 18 months after he, his 70-year-old wife and their son were seized by the militants.  No explanation was ever provided for the night-time visitation and ‘arrests’, and there is nothing to indicate why the 68-year-old pensioner should have recently been ‘sentenced’ to 17 years for supposed spying.

Atamanchuk is a former miner who has lived in Donetsk all his life.  When the war began in 2014, his daughter fled with her small son to Kyiv, however her father refused to move and his wife and son remained with him.  As Atamanchuk’s daughter, Olena, explains, her father had made every corner of the family home himself, and could not bear the thought of abandoning his home and garden to begin at his age with absolutely nothing somewhere else.

In the night of 4 September 2018, three men, presumably from the self-styled ‘DPR ministry of state security’, turned up and took Atamanchuk, his wife and son away. Olena only learned of this after she became worried when no one answered the phone and she called the neighbours who knew only that the militants had taken the entire family away.

Since then virtually nothing has been heard about Atamanchuk himself.  The militants did not touch his wife who had recently had a heart attack, however Olena’s brother came back in what Olena says was a bad state.

With the help of the Red Cross, Olena was able to get her mother out of occupied Donbas.  The situation with her brother was more difficult and tragic.  He was persecuted by the ‘DPR ministry of state security’ throughout that year.   He began hiding, since he had been warned by the militants that if he tried to cross into government-controlled territory, the militants would imprison him again.  He lost his work and died in 2019.

For a long time, the only information about Atamanchuk came from Ihor Kononenko, one of the hostages released in the exchange on 27 December 2017.  He named  Atamanchuk as one of the Ukrainians he had seen in the ‘SIZO’ [remand prison].

Olena Atamanchuk has approached everybody in her attempts to find out where her father is being held.  The SBU [Ukraine’s Security Service] could only tell her that her father was on the exchange list.  This, however, was reported before the exchange on 29 December 2019, and Atamanchuk was not freed.  From the so-called ‘DPR ministry of justice’, Olena learned that her father had been ‘sentenced’ too 17 years’ imprisonment “for spying and working for Ukraine”,   The number of years may vary, but this remains the usual ‘sentence’ used against civilian hostages and prisoners of war.  The only positive thing is that Olena is able, once a month, to pass on medicine for her father who had only just undergone a medical examination when he was seized and is in very poor health.

According to Valeria Lutkovska, Ukraine’s Representative in the Contact Group on Donbas, there are at least 300 people awaiting release, of whom only 100 have been confirmed by the militants. Although upbeat noises are made, there is nothing to suggest that another exchange of hostages is planned in the near future.