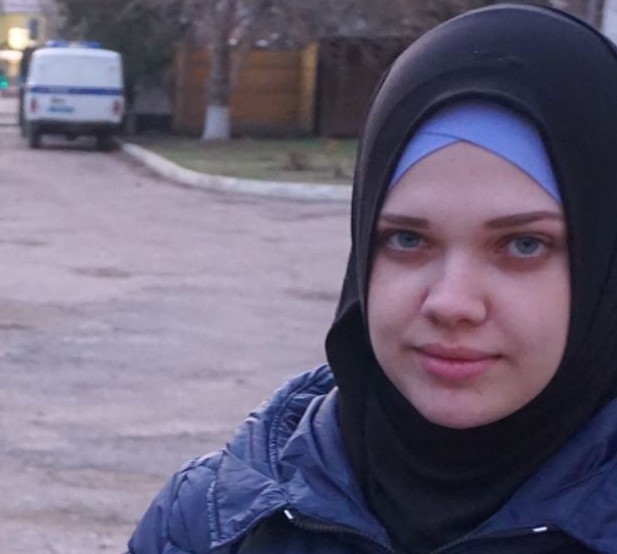 Crimean Solidarity activist Gulsum Alieva was detained on 13 January 2020 while trying to cross into mainland Ukraine, and held at a police station in Russian-occupied Crimea for over five hours.  She needs to get to Kherson for medical reasons, and returned to the ‘border’ later that evening, only to be detained again and held for a further three hours before being forced to return home, without getting to Kherson. Alieva, the daughter of recognized political prisoner Muslim Aliev, was detained back in June 2019 on the same absurd pretext, one that in itself constituted political persecution.

Russia’s terrorization of the Aliev family began with an ‘operation’ by armed and masked men on 11 February 2016 resulted in the arrest of Muslim Aliev and the profound traumatization of his youngest child, 7-year-old Seidali.

Two years later, on 19 July 2018, the FSB against burst into the Aliev home, with the target this time, Seidali’s 21-year-old sister, Gulsum, who has had a serious medical condition since childhood.

The ‘search’ that began at 6.30 am and lasted several hours was officially not a search, but an ‘inspection’ in connection with a ‘preliminary investigation’ under Article 282 (inciting enmity), one of the notorious ‘extremism’ clauses which Russia is illegally applying on occupied territory.  Criminal charges were laid a month later, on 10 August 2018, over a picture and caption that Alieva had merely reposted on her Facebook page.

The text in question was something that purports to be a quote, highly critical of Russians, from the Russian philosopher Ivan Ilyin, whom Russian President Vladimir Putin is known to have praised.  The image which can be seen here also has, in a different colour the words “Russia is a country of moral monsters” and (at the bottom) ‘Death to Russian occupiers!”

This was simply a reposted text, with Alieva adding no comment from herself, and it was, therefore, assumed to be motivated by the young woman’s active participation in Crimean Solidarity.  This civic initiative arose after the arrest of her father, human rights defender Emir-Usein Kuku and four other Ukrainian Muslims, and works to both help political prisoners and their families, and to provide information about the ever-mounting repression in occupied Crimea.  Since October 2017, Russia has been systematically persecuting members of the initiative, with a large number now imprisoned and facing huge sentences.

In December 2018, Alieva was added to Russia’s notorious list of supposed ‘terrorists and extremists’, a list which includes a huge number of political prisoners, and makes the supposed ‘cooperation’ from the Council of Europe so baffling.

The charges were, however, dropped after amendments were made to Article 282 preventing the use of criminal charges for a single reposted text or picture on social media.  That change in the law was supposed to also stop people being added to the ‘list of terrorists and extremists’, and in some cases people’s names have, indeed, been removed.

Not, however, in Gulsum Alieva’s case, and she remains on the list as (at present) No. 766.  It is just possible that this really is a bureaucratic error, although it seems more likely that this is either part of the general attack on Crimean Solidarity or a further act of petty persecution by the Ukrainian turncoat, Alexander Kompaneitsev who, in his new role as FSB officer, has played an extremely malignant role in the persecution of Gulsum’s father and the five other Ukrainians from the Yalta region. It is known that it was at Kompaneitsev’s initiative that Alieva was added to the list which already contains the names of her father, Kuku and around 70 Crimean Tatars, most of whom are imprisoned for their peaceful civic activism and / or their faith.

Lawyer Alexei Ladin believes that the failure to remove Alieva is due to personal animosity from Kompaneitsev.

Crimean Solidarity reports that after her first release on 13 January, Alieva said that she had been asked about Hizb ut-Tahrir, the peaceful Muslim organization which is legal in Ukraine but which Russia is using as a politically-motivated pretext for persecuting Muslims, including in occupied Crimea.  Alieva was asked if she knew people from Hizb ut-Tahrir and also about Crimean Solidarity.  None of this had any relation to the official reason for her detention.  There was, in fact, no justification for her being held for more than the time taken to read the document that states clearly that the criminal charges against her were terminated back in January 2019.

Please see also information about Muslim Aliev, and Russia’s totally illegal persecution of him and the five other men, and write to the men.  Letters tell the men that they are not forgotten and Moscow that its persecution of Ukrainians for their faith and / or activism is not going unnoticed.