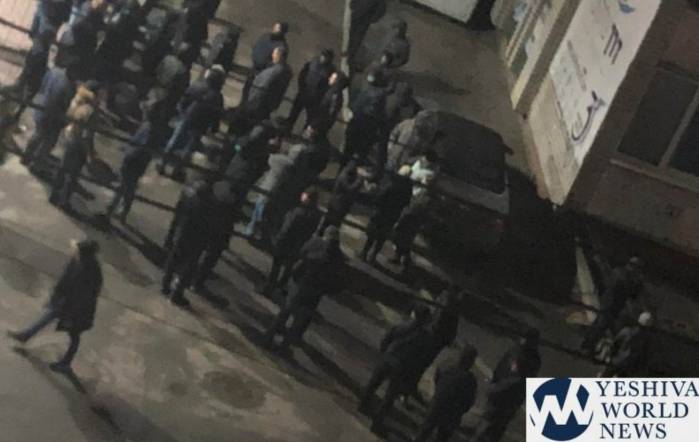 On 11 January 2020, the Israeli publication Yeshiva World News posted a supposed news report under the shocking title “POGROM IN UMAN OVER SHABBOS: Ukrainian Thugs Attack Jews, 4 Evacuated To Hospitals”.  There was no pogrom, yet within hours ‘the story’ had been repeated as though it were established fact by other Israeli, Ukrainian and Russian media.  Very few have posted updated texts, explaining that the information had proven false, and some of those who reported the police statement debunking the claims still kept the same catchy – and misleading – titles.

The Yeshiva World News [YWN] report claimed that it had the information from unnamed “witnesses” and had clearly not turned to the police or any other officials to verify the information.  It was claimed that “A group of about 30 Ukrainian thugs went on a rampage close to midnight on Friday night in Uman and mercilessly beat Jews outside the tzion of Rav Nachman.  Witnesses say that the Ukrainians were running wildly through the street looking for Jews with knives and clubs in their hands.”

It was further asserted that “the police did show up at the scene but didn’t lift a finger to help the Jews. “

The only named source is somebody identified as “Shlomi Elisha, director of “Shemira Ukraine” who allegedly asserted that “due to the many incidents in recent months, we’re funding a commando unit which will protect us and our streets from the Ukrainian thugs. We have no more expectations of the Ukrainian authorities.”

An Internet search for these apparently identified sources brings up pages of linksv to the YWN article or its regurgitation in Ukrainian or Russian media.

Just after 14.00 on 12 January, the Head of Ukraine’s National Police, Ihor Klymenko was reported to have sent employees of various services to the Cherkasy oblast to “establish the circumstances of the conflict situation involving Hassidim and local residents”.  The police report stated that they had already established that the claim about four Hassidim being in hospital was not correct, nor had anybody turned to the police over conflict between local residents and Hassidic Jews.

Vyacheslav Likhachev, long-term researcher into anti-Semitism in Ukraine (and into disinformation about such anti-Semitism) has pointed to a report on social media from 12 January.  If this is to be believed, and no unverified claims should be taken at face value, there was a fight which “five drunk Hassidic Jews” allegedly provoked with people guarding the grave of Rabbi Nachman – a place of pilgrimage for Hassidic Jews every year.

The basic fact of a conflict between employees of a security firm and some Hassidic Jews was confirmed by the Uman City Council’s Executive Committee on 12 January. That report rejects any claims of serious injury or of any mass nature of what is called an everyday dispute.  The council speaks of two meetings, with the meeting on 12 January between council representatives and members of the Hassidim, police officers and SBU [Security Service] officers agreeing to employee National Security Service guards to protect the grave and that in cooperation with the City Council, Hassidic Jews would establish CTTV cameras at the site

Yet on both 11 and 12 January, numerous media simply repeated the YWN ‘report’, without either trying to check the information or suggest that verification was required.

While this is standard behaviour for Kremlin-loyal Russian media, it is disturbing that Israeli and Ukrainian media also followed suit.

Jerusalem Post did correct its report, stating clearly that “a group of teens gave Israeli media a false report claiming that an antisemitic mob was taking place in Uman, Ukraine, causing nationwide outrage”.

“In reality, Uman Shalom explained that an argument ensued between Israeli teens and a local security guard over an elevator. The argument became violent and the guard was later joined by other locals.”  JP extensively quoted the City Council report, including the assurance that there had not been any ethnic or religious motives to the conflict.

Perhaps some other media have also refuted the story, however as of late on 14 January, the report in full, sometimes with changed, but equally appalling titles, can still be found on very many sites.

One of the first Ukrainian sites to report it in three languages was 112.ua, a very popular publication which is widely believed to be linked with Viktor Medvedchuk, the controversial politician and crony of Russian President Vladimir Putin.  While Medvedchuk’s first political party ‘Ukrainian Choice’ was, with cause, accused of anti-Semitic and homophobic leanings, attempts to present Ukrainians as rabid anti-Semites have been a staple part of the propaganda methods used by the Kremlin, the opposition parties that Medvedchuk supports and by the administration of former Ukrainian President Viktor Yanukovych.  Strana.ru, which uncritically repeatedv the YWN report is also well-known for broadly following Russian anti-Ukrainian propaganda. The same is not true of RBC.ua, which also reported the story and has done nothing to correct it.

One of the standard components of such ‘reports’ is almost always some kind of general claim about anti-Semitism in Ukraine.  Even Jerusalem Post, which made a point of correcting its information, still pointed to two earlier ‘examples’, including the apparently shocking attack on a synagogue in Uman in the early hours of 21 December 2016.  The synagogue is next to the grave of Rabbi Nachman and pilgrims were praying in the synagogue at the time. The young men who burst in shouted anti-Semitic insults, sprayed the premises with bottles of red paint and left a pig’s head with a swastika carved out.  What JP may not have known is that two men are currently on trial in Ukraine, charged with the commissioned manufacturing of supposed hate crimes, including the attack in Uman.

Some of the assertions in the media are simply absurd.  112.ua, for example, ends a report which simply repeats the false YWN report by asserting the following: “A similar incident took place in Uman at the beginning of December last year when an armed attack was carried out on a Jewish pilgrim who was praying at the grave of Rabbi Nachman.”  112.ua obligingly provided a link, probably assuming that few would check it.  According to the cited report, the attack on 30 November 2019 was by a fellow worshipper.

It is possible that this fake was a genuine mistake, with YWN taking the report of participants in a dispute at face value.  There have, however, been numerous such attempts to claim either anti-Semitic or other xenophobic attacks in Ukraine since the Revolution of Dignity from November 2013 to February 2014.   See for example,

While Ukraine has suffered from propaganda attempts, very often generated in Moscow, to push a stereotype of Ukrainians as anti-Semitic, it has been extremely fortunate in having a number of qualified experts, religious and other public figures, many of them representing Ukrainian national minorities, willing to emphatically debunk all such efforts.  Likhachev’s monitoring of anti-Semitism and xenophobia in Ukraine has also provided invaluable facts countering the false narrative.  He notes, for example, that in 2019, not one case of anti-Semitic violence was recorded in Ukraine.

See also: The Facts about Anti-Semitism in Ukraine that Russia doesn’t want known