Russian-controlled Donbas militants finally free severely disabled pensioner but not her invalid sonPrisoner exchange leaves most Donbas hostages in captivity and makes journalists suspiciousDesperate plea to Zelensky from relatives of hostages once again forgottenRussia’s ‘all for all’ exchange: those who were not returned to UkraineStudent imprisoned for ‘liking’ pro-Ukrainian social media posts in occupied Luhansk
• Topics / The right to liberty and security 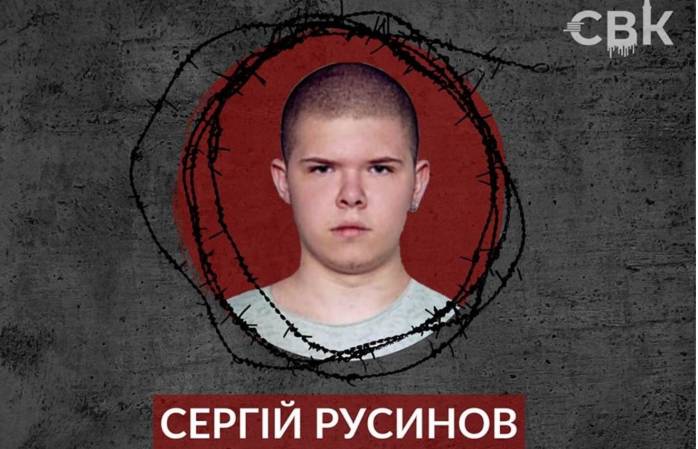 One of the many hostages held by the self-proclaimed ‘Luhansk people’s republic’ who was not freed on 29 December 2019 was 23-year-old Serhiy Rusinov.  The student of an art and culture college in Luhansk has been imprisoned for almost two years and was recently ‘sentenced’ to six years, essentially for social media comments and ‘likes’.

The Eastern Human Rights Group, which has been the main source of information about Rusinov’s captivity, reported on 14 January that the young man has been moved to Prison No. 19 in Vakrusheve, where he has been placed in the maximum security sector, almost certainly together with people who really have committed serious crimes.

It was only in August 2019 that the human rights activists first reported Rusinov’s captivity.  This was a full year after he had been seized by the so-called ‘LPR ministry of state security on 24 August 2018, and ‘sentenced’ on 23 October 2018 to six years’ imprisonment.

He was accused of both organizing a ‘pro-Ukrainian terrorist group’ and of having a pro-Ukrainian position.  The latter is doubtless true, but is no crime, while there appear to be no grounds for the ‘terrorism’ charge, under article 244 of the Russian-controlled ‘republic’s’ so-called  ‘criminal code’.

The human rights activists published a copy of the first page of the ‘sentence’ passed on 23 October 2018 by the so-called ‘LPR military court’, under presiding judge A.H. Lungu, with N.S. Chaltseva named as ‘prosecutor’.  This first page confirms that he is charged with ‘taking part in an organization recognized in ‘LPR’ as terrorist’ (article 244, part 2) and 343 part 1 (incitement to enmity and denigrating a person).  The first page claims that Rusinov incited hatred and denigrated people on the basis of race, nationality or their social group.  His “criminal intent” and incitement to enmity is allegedly seen in his use of VKontakte.

Radio Donbas Realii examined Rusinov’s VKontakte page and found that as information about himself, the young man had written: “I love my mother, hard core and Ukraine”.  Since there was relatively little activity either there or on Instagram, that post and the fact that he was signed up on certain patriotic groups may have been deemed enough to imprison a young student for six years.

That no more is needed in the Russian-controlled Donbas ‘republics’ has already been demonstrated by the imprisonment, torture and huge sentences passed in ‘LPR’ on football fan Vladyslav Ovcharenko for flash mobs in which his contempt for the so-called ‘republic’ and loyalty to Ukraine were clearly demonstrated.  ‘LPR’ also jailed Edward Nedelyaev for 14 years because of his blogs in which he told the truth about the ‘republic’.  Both Ovcharenko and Nedelyaev were finally freed in the December exchange in 2017, however very many others remain in captivity.

A #FreeRusinov campaign has been launched to draw attention to the young man’s imprisonment and ensure that he part of the next exchange.