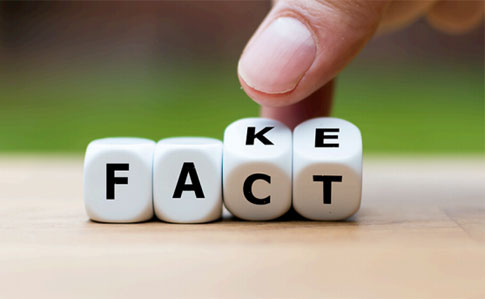 The proposed bill on fighting disinformation, put forward by Ukraine’s Ministry of Culture, Youth and Sport, has elicited critical responses from media experts who say it envisages a dangerous level of interference in journalist activities and gives huge scope for restrictions of fundamental freedom.

It is probably true that none of the critics of these new plans dispute the danger of disinformation, and the fact that Russia has used information, as well as military warfare against Ukraine over the last six years. The differences lie in understanding how to combat disinformation efficiently but without imposing restrictions that are unacceptable in a democratic country.

On 17 January, Volodymyr Borodyansky, Minister of Culture, Youth and Sport [the Ministry] and his First Deputy, Anatoly Maksymchuk presented the first broad details of a proposed draft bill ‘On amendments to some legislative acts to safeguard national information security and the right to access to accurate information.’.  The basic provisions had already been announced on 15 November 2019, however details were now given, with a comparative table posted on 20 January.  The Ministry has invited media groups and other ‘stakeholders’ to an all-day discussion on 28 January, and is setting aside a month for public discussion. According to the Ministry’s schedule, a draft bill should be presented to the Cabinet of Ministers by 28 February 2020 and then considered by the Verkhovna Rada in March.

The draft bill proposes to introduce criminal liability for “deliberate mass circulation of knowingly inaccurate information or financing of such, with the punishments ranging from steep fines to imprisonment for up to 7 years.  It also states that the first challenge lies in the lack of any mechanism in current legislation to apply to the courts to stop disinformation if it is not targeted at a particular individual.  The solution it proposes is the creation of a new body – that of an Ombudsperson on Information Matters, which would be responsible for both checking reports (should complaints be received, etc) and ensuring the removal of disinformation.

The powers proposed for this new body are among many reasons why the plans have been strongly criticized by media experts. In a damning analysis, for example, the Institute for Mass Information [IMI] has not only said that MPs should not support the bill, but that the Ministry should refrain from even registering the bill.  It contains, they say, “ambiguous norms which are unacceptable in a democratic society”.

A very narrow definition of disinformation is proposed, with this essentially being just inaccurate information on issues of great public importance.  IMI believes that the authors of the draft may be inaccurately translating fake news since disinformation is much broader than simply wrong information.  The media watchdog also views the mechanisms for reacting to the circulation of disinformation at very least imperfect, if not downright flawed. The first issue is that it is not law enforcement bodies who will be responsible for reacting to such publicly dangerous wrong information, nor even the National Broadcasting Council, but a totally new body – an Ombudsperson (and their office) whose status and powers raise many questions.

All regulation in the information sphere would be under the jurisdiction of this state Information Ombudsperson. Without public control over this official’s activities and without mechanisms to prevent abuse of power and position

IMI does not mention the other issue that would undoubtedly cause problems.  There have been legitimate concerns about the selection of each Human Rights Ombudsperson to date, and the same danger of politicization would certainly arise here too, especially since it would be the party in power, via the Cabinet of Ministers who would appoint and dismiss this person.  This while the Ombudsperson and his / her representatives would not be civil servants, and their work would not be regulated by the Law on the Civil Service.

Their powers would, however, be extremely broad and they would have effective monopoly on determining what is disinformation.  This Ombudsperson would be able to demand retraction of information and ask the court to restrict access to information spread through the Internet.  At present the procedure is described in a way that suggests that there would be no possibility of objecting against the blocking of the site.  The ombudsperson would have the right to directly approach the technical intermediaries or administrators of systems and the register of domain names to identify the person spreading the information.  Those possessing this information would be obliged to provide it within 24 hours.

A court would be obliged to respond to an application for a site to be blocked within 3 days.  The Ombudsperson would also apply to the court to restrict access to a site, etc. if there was no information to identify the source, while also applying for fines to be imposed.  There is no procedure for the person or entity whom the Ombudsperson wants fined being invited to the court hearing, and this despite the minimum fine being almost five million UAH.

Some of these powers seem eerily similar to those currently enjoyed by Roskomnadzor, Russia’s effective censor. Certainly IMI is concerned by the role of this new office. “The draft bill would create a mechanism for state interference in the information sphere in the form of an Ombudsperson on Information Matters given huge powers to interfere in any aspect of information activities in Ukraine without any measures to protect against abuse.”

IMI stresses that this interference would not be based on expert analyses or similar, but on the Ombudsperson’s own views and assessment.  This would breach Ukraine’s commitments under, for example, Article 10, guaranteeing freedom of speech, of the European Convention on Human Rights and Fundamental Freedoms and European Court of Human Rights practice.

There are obvious dangers where an Ombudsperson has ultimate say in whether information is correct or not, especially where that person has been appointed by politicians.  There are also many cases in times of war when information issued by, for example, Ukraine’s Military Intelligence may be at least partially incorrect.  What happens where a journalist asserts something else?  Would that result in the journalist being accused of disinformation?  The presentation of the Ministry’s proposals has coincided with Hromadske TV’s unsuccessful cassation appeal against an extraordinary court ruling which found the channel guilty of defaming the far-right ‘C14’ by calling it neo-Nazi.  The fact is, however, that very many of us consider the movement to be neo-Nazi with this assessment based on evidence provided by authoritative experts on far-right movements in Ukraine such as Vyacheslav Likhachev and Anton Shekhovtsov.   This bizarre situation, which is quite likely to end up with yet another judgement against Ukraine at the European Court of Human Rights, could well end up happening very often if an Ombudsperson on Information is given wide powers to decide on what is ‘disinformation’.

There are other eyebrow -raising elements.  The Ministry proposes to create a special body called the Association of Professional Journalists of Ukraine, with only those journalists who receive a card from this association being able to call themselves professional journalists and be protected by the state from, for example, obstruction of their professional activities

The law would also include the concept of ‘journalists’, being those who had not joined the above-mentioned association.  ‘Journalists’ would be restricted in their access to state authorities and would not have various guarantees of protection – defence against crimes linked with their journalist activities, for example.  This would almost certainly place Ukraine on collision course with the European Court of Human Rights, however this innovation is first likely, and with cause, to run into major opposition within Ukraine.

All of those who apply to become members of this ‘Association of Professional Journalists’ can do so, as long as they fulfil certain basic requirements, including three years work record as a journalist.  How a person would be able to get work as a fully-fledged journalist in their first three years is not clear, however there are much more serious problems.  While a requirement is “adherence to the Journalist’s Code of Professional Ethics”, there is no indication as to how this would be monitored.  There is also nothing to explain how such an open house is supposed to weed out professional propagandists, including those adepts of ‘Russian world’ ideas, people writing news as commissioned,  etc.  Yet it is they who would receive accreditation and protection of their ‘journalist activities’, unlike those who refused to join this club.

As well as journalists and public officials, the law would also address circulation of disinformation by individuals on social media.  These individuals are called “circulators of information”

There could be questions over what constitutes ‘mass circulation’ in such cases. Such ambiguity has often been used in Russia against individuals whose posts were scarcely read or watched, but which could, in principle, have been “available to an unlimited number of viewers”.

IMI is concerned that the law would “make it possible to hold anybody criminally liable merely for reposting some information on social media, without such prosecution taking place in accordance with procedure established by legislation on criminal procedure. “

This means that those who create fakes and those who believed and then reposted information could be equally liable, and since the creator is unlikely to be found, it would be those who believed it who got the cop.  This is evidently unjust, and it is obviously that the state must react differently to those who deliberately misinform, and those who simply lacked the critical thinking needed to detect the lie.

IMI points out that current legislation does make this distinction in special norms of criminal procedure legislation.  The changes now proposed suggest none.

IMI points out that legislation does already envisages mechanisms for getting false information retracted, as well as administrative liability for spreading information that could cause panic or infringe public order (Article 173-1 of the Code of Administrative Procedure).  There is also criminal liability for public calls to violently overthrow the constitutional order or seize power (109) and in 110 public calls or circulation of material to change Ukraine’s territorial integrity, etc.

While the idea that the state should react to disinformation is clear, IMI is convinced that the mechanism proposed for reacting would do more harm than good. “Unfortunately, for the moment this is more akin to discreditation of the very idea of fighting fake news”.

The bill would not protect the public from disinformation, but would instead “create a mechanism for total control over the information realm, and not only over traditional media, but also over ordinary citizens who in any way share information”.

While IMI has probably carried out the most comprehensive analysis, they are certainly not alone in criticizing the proposed bill.  Detector Media journalist Volodymyr Malynka has prepared a list of questions and answers on “how the proposed innovations threaten Ukrainians”.  This was in consultation with Vita Volodovska, Head of the Legal Department of the Laboratory of Digital Security, who calls the bill “an unprecedented intrusion in freedom of the media and of information”.  She points to a number of dangerous provisions and instruments of censorship, which will serve to deter not only journalists, but also ordinary Internet users.

The above does not cover all aspects of the proposed amendments, which include the idea of establishing an ‘index of trust’ for media without particularly explaining how the innovation would work and how it would command trust.  It is to be hoped that the event on 28 January and feedback from media and civic organizations will prompt the Ministry to make significant adjustments to the bill before it is tabled in parliament.