Sheremet Murder: Lack of sufficient evidence admitted after suspects all but declared guilty 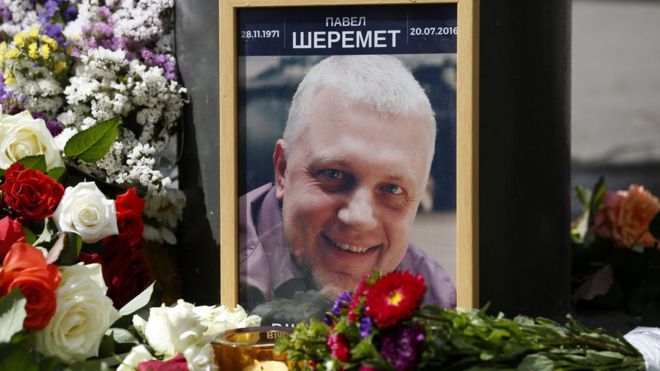 Less than two months after a high-profile press briefing at which it was claimed that the murder of journalist Pavel Sheremet had been ‘solved’, Ukraine’s Prosecutor General Ruslan Riaboshapka has acknowledged that they do not have the evidence to send the case to court.  This is despite two prominent Ukrainians - paediatric surgeon and military volunteer Yulia Kuzmenko and well-known musician and war veteran, Andriy Antonenko (Riffmaster), still being held in custody and military nurse, Yana Duhar under house arrest.  Nor is the problem only in the lack of evidence, as there appear to be major discrepancies in the investigators’ case, including a difference in height between the alleged perpetrator and Antonenko.

On 30 January 2020, Riaboshapka stated in an Interfax interview that more evidence needed to be gathered before the case was passed to the court.  “In order to gather additional evidence which confirm or refute the guilt of these people – and we should move in both directions, written prosecutors’ instructions have been issued, and timeframes for this”.

Notification had, indeed, been placed on the Prosecutor General’s Office site stating that the police investigators had received instructions to carry out “additional investigative (search) activities aimed at establishing all the circumstances of the crime.”  This must include a thorough check of the arguments put forward by the defence lawyers for the suspects.

Such concern that there should be sufficient proof and willingness to accept evidence proving the suspects’ innocence are undoubtedly to be welcomed.  The problem is that they are seriously belated.  Riaboshapka was present, together with President Volodymyr Zelensky and the Interior Minister Arsen Avakov at the press briefing on 12 December 2019 which all but claimed that the case had been solved, with this clearly implying that the five people named as suspects were guilty.

During that press briefing, Riaboshapka asserted that “The solving of this crime is an excellent example showing that for the first time since Independence the prosecutor’s office and police bodies are cooperating well. .. I would like to note the enormous work of my colleagues from the National Police and bodies of the prosecutor’s office and congratulate them with such a significant success”.

Riaboshapka’s use of the word  “success”, like so many other assertions during that press briefing, were already a breach of five people’s right to the presumption of innocence.  Now one of the participants in the breach is publicly acknowledging that additional evidence is needed and that this could prove that all or some of the suspects are innocent.

Only three people – Antonenko, Kuzmenko and Dugar - are actually facing charges over Sheremet’s murder, although five names, including Inna and Vladyslav Hryshchenko were mentioned during the press briefing.  This is, at very least, worrying since the police reported during the briefing that their DNA had been found on an explosive device.  It was not clear which device was referred to, nor how the couple were alleged to have been involved in the Sheremet case.  Almost two months later, there remains no clarity, and neither has been charged, with this surely raising the question of why they, and the supposed DNA ‘evidence’ that links him with a crime, were ever mentioned.

During the Interfax interview, Riaboshapka talked about finding those who commissioned the crime, as had Zelensky on 12 December.  During the briefing, Avakov also suggested that the investigators were still considering a possible Russian link to the case.

Assertions were made during the briefing about suspects having made large purchases, which could give weight to the suggestion that there were people in the background who had commissioned the crime.

The trouble is that this clashes with the alleged motive of the alleged ‘organizer’ of the crime.  The investigators have claimed that Antonenko organized the crime, and sought out people to carry it out.  He is also supposed to have been the man, recorded by video footage, walking with the woman seen placing the explosive device under Sheremet’s car.

Antonenko is alleged to have done this, “Seized by ultra-nationalist ideas, cultivating the supremacy of the Arian race, the division of society on the basis of ethnic identity, wanting to make his views the object of public attention and carrying out his actions in order to draw the public’s attention to certain political beliefs… he decided to create an organized group in order to carry out the murder of journalist and radio presenter Sheremet”.

Antonenko  expressed anger over these claims during the detention hearing on 14 December.  He said that he had grown up in a Jewish neighbourhood and is himself half-Jewish. The investigators had thus insulted both him and his family with their allegations.

Not only does the motive thus presented clash with any implied suggestion that the suspects were carrying out a commissioned crime, but it also makes absolutely no sense.  Sheremet’s murder did not attract public attention to these repugnant views, nor is there any evidence at all that attempts were made at any level to do so.

A great deal was made during the briefing about expert assessments, including one from Ivan Birch, a forensic gait expert from the UK.  The trouble here is that the assessments do not appear to be at all conclusive, and there really does not appear to be much else.

There are also some significant discrepancies.  In 2016, the police identified the male they were looking for as being 1.68-1.75 m. tall. In a major presentation of the case to date, Ukrainska Pravda writes that they have a three-year-old conclusion which confirms this height.  Antonenko at 1,8 m. is a considerable amount taller than the upper figure named.  During the last court hearing, his lawyers stated that they had only learned of the earlier assessment from the media and accused the investigators of concealing crucial material.

Huge public support for Antonenko, Kuzmenko and Dugar does not, in itself, prove that the three are innocent, but it does make the need for maximum clarity as to the grounds for the charges particularly urgent and there has been none.

Even the international media watchdog Reporters without Borders recently issued a statement indicating concern over what they called inconsistencies in the case.  Most worryingly, if unsurprisingly, they point to pressure from Zelensky for Avakov to produce results by the end of the year.

Sheremet was closely connected with Ukrainska Pravda and the latter has been demanding a proper investigation ever since his murder.  They articulated many of the unanswered questions within hours of the press briefing on 12 December, but have been careful to distance themselves from any campaign in defence of Antonenko and the others, insisting only that there must be a proper investigation and a just trial.  They reiterated this position in the preface to a fairly disturbing outline of the case and the questions still unanswered on 16 January presented by UP author  Sonya Lukashova.  If, they say, it transpires that the ‘solving of the Sheremet murder’ announced with such fanfare on 12 December proves to have been nothing of the kind, then Avakov should resign immediately.

The notification on the Prosecutor General’s Office site does not indicate which arguments from the defence need to be checked, but does also demand additional investigative activities.

Unlike the very public pronouncements both during the press briefing and by Avakov during a television show, the police have not come out with any more public statements about the results of such investigative measures.  Unless, that is, we assume that this was the point to a rather belated and very strongly-worded report on their website.  Under the title, “Lies under oath are a crime. Lies in the media to create a fake alibi, that is ….” , a great deal was made out of the fact that a person had asserted on television immediately after Antonenko’s arrest that he could confirm the latter’s alibi.  The police themselves admit that this was on television, not under oath, and they give no details to substantiate their assertion that there are other such cases.  The statement, coming hours after the media widely reported Riaboshapka’s interview and his written instructions, does not otherwise address the other concerns expressed by the defence and the lack of sufficient evidence.