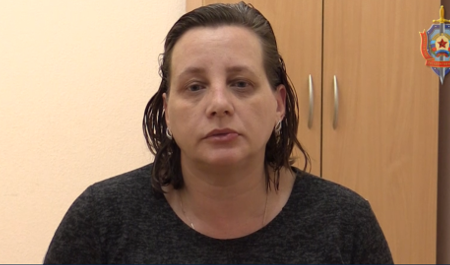 The self-proclaimed ‘Luhansk people’s republic’ has seized another woman hostage and is claiming that she was ‘spying’ for Ukraine’s Security Service [SBU].

The so-called ‘LPR ministry of state security’ reported on 27 January that Marina Nedodayeva had “on the instructions of the SBU gathered information about military servicemen of the people’s militia” on the territory of the Russian-controlled ‘republic’.  It asserted that she had also carried out what they termed “agitation and propaganda work” among so-called LPR military servicemen “aimed at getting them to change to the side of the enemy by using the SBU program “They’re waiting for you at home”.

There is indeed such an SBU program which offers militant fighters who have not committed any serious crimes the opportunity of returning to government-controlled Ukraine with the slate wiped clean.

The so-called Donbas ‘republics’ have followed Russia’s FSB in producing video ‘confessions’ which are invariably the only ‘evidence’ presented to back accusations.  These never have anything in common with proper criminal procedure regulations for making a confession.  There is no lawyer present, nor anything to indicate that Nedodayeva has a person representing her, and only she is visible in the video which itself appears to have been put together from separate shots, rather than a continuous video.  She is speaking in a situation where she is totally under the control of her captors and gives the impression of reciting what is demanded of her.  She mentions “Ira”, one of her two eldest children whom, she says, she was visiting in occupied Luhansk.  The ‘LPR’ report claims that the SBU first used a similar method to ‘recruit’ Nedodayeva’s eldest daughter, Iryna Shchetinina, who allegedly carried out tasks from SBU officers.  The latter are claimed to have threatened physical reprisals against her underage brother and sisters if Shchetinina didn’t.  During Nedodayeva’s monologue, she claims that an SBU officer called Andriy shouted at her and hit her with a towel. It seems at least as likely that it is Nedodayeva’s captors who have forced a fairly strange ‘confession’ from here, using threats or actual physical violence.

There is no way of knowing for certain whether Nedodayeva or her eldest daughter were helping the SBU.  However, if Shchetinina was detained after a year, in 2018, then none of the dates add up.  There are also reports on social media suggesting that the 43-year-old mother of six underage children disappeared on 16 January.

The militants have clearly used this ‘arrest’ as a method of circulating anti-Ukrainian propaganda and threatening the local population with similar reprisals if they don’t report ‘crimes’.  Having captured Nedodayeva, they will doubtless hold on to her as yet another of the over 200 hostages whom the Russian proxy ‘republics’ are still believed to be illegally holding prisoner.