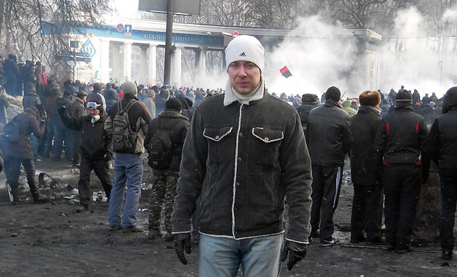 There are many reasons why photos from the Euromaidan protests, now known as Ukraine’s Revolution of Dignity, are poignant.  In the case of Valentin Vyhivsky, these are among the last photos before the young Ukrainian was seized, tortured and imprisoned in Russia.  He remains in captivity to this day, held illegally in Russia almost two thousand kilometres from his now 11-year-old son and the rest of the family.

Valentin is the second political prisoner in the Vyhivsky family.  In 1951, his grandfather, Stepan Vyhivsky, a WWII veteran, was sentenced to 25 years under the notorious Article 54 (‘counter-revolutionary activities’ , ‘treason’).  He was imprisoned in Vyatlag, one of the labour camps of the Soviet GULAG, also in the Kirov oblast, around 200-300 kilometres from where his grandson is now serving an equally political sentence.  Stepan Vyhivsky was released in 1955, after Stalin’s death and the mass release of political prisoners.

His grandson has now spent longer a political prisoner in modern Russia.  It is unclear why, 60 years later, Russia did not release Vyhivsky in the exchange of prisoners on 7 September 2019, and why he is being held in almost total isolation.  Russia does appear to have a lot to hide in this case, and Vyhivsky’s family still doesn’t know what exactly he was charged with.  It was probably after his mother visited him in prison in early 2018, and learned more about the mock executions, beatings and other torture methods used to extract his ‘confession’, that the decision was taken to impose punishment after punishment as a pretext for holding him in punishment cells.  This allows the prison authorities to hold him in solitary confinement and to severely curb his contact with his family.

Valentin was just three years old when the Chornobyl Disaster forced his family from their home in Prypyat.  His father actually worked at the nuclear power plant, and it was pure chance that he was not at work during the explosion.

The family received a flat on the outskirts of Kyiv and Vyhivsky was later to graduate from the Electronics Faculty of Kyiv Polytechnic.

From earliest childhood, he was fascinated with aviation, and even though he needed to get a job quite unrelated to this passion, he spent a huge amount of time on the Internet chatting with other enthusiasts, many of whom are in Russia.

We may never find out whether the ‘enthusiast’ involved in Vyhivsky’s capture actually approached the FSB herself, perhaps fearing that she could be accused of suspicious contact with a Ukrainian, and one who had taken part in Euromaidan, or whether she was recruited by the FSB. The woman in question in September 2014 asked Vyhivsky for help with money, supposedly for her grandfather’s cancer treatment.  Vyhivsky managed to get the money and arranged to meet the woman in Simferopol, Crimea which was already under Russian occupation.  His father opposed the plans, but Vyhivsky explained that the woman had said that she could not herself come to Kyiv, because she was employed by the Russian defence industry.

What does seem clear is that the woman’s “plea for help” was coordinated with the FSB.

Vyhivsky set off for Simferopol on 17 September 2014, formally to attend an aviation exhibition, but also to pass the acquaintance the money she had claimed to need. He had a return ticket and was planning to return that evening, so his parents swiftly understood that something was wrong when Vyhivsky disappeared and all contact was lost.  It seems that he was taken prisoner immediately, at the railway station.

He was taken against his will to Russia where he was held incommunicado for eight months, without a proper lawyer or contact either with the Ukrainian consul or his family.

He was initially charged under Article 183 of Russia’s Criminal Code with illegally receiving and divulging commercial, tax or banking secrets.  This was then changed to the much more serious charge of trying to gather Russian state secrets to pass on to the Ukrainian Security Service [SBU]. The FSB version after his conviction was that Vyhivsky had “come to their attention in 2012 and was suspected of gathering information containing commercial secrets through bribes, as well as information containing state secrets in order to pass them to a representative of a foreign state.

The FSB’s inability to decide what they were charging Vyhivsky with already arouses suspicion, but the most damning aspect of this case is, undoubtedly, the fact that Vyhivsky was held for so long incommunicado and without a proper lawyer.

During that period, Vyhivsky only once met anybody unrelated to the ‘investigation’.  Russian human rights activist Zoya Svetova, who had been approached for help by the young Ukrainian’s parents, reported that Vyhivsky was clearly frightened and refused to say anything to her, even what article of the criminal code he was charged under.  Petro Vyhivsky has since explained that his son only understood that he could trust Svetova after the latter used one word that they had given her, as a kind of code to their son.

Vyhivsky was only allowed a visit from the Ukrainian consul after eight months, and then in the company of two guards who immediately stopped them if they tried to talk about anything but ‘neutral subjects’.  The same thing happened when his mother was allowed a visit after nine months.  He managed to tell her only that “they know how to persuade you”.  He did, however, also show her the marks on his body remaining from these ‘methods of persuasion’, which also almost certainly included not only beatings, but mock executions.

The FSB particularly likes ‘spying’ cases since even the ‘trials’ can be held behind closed doors.  Many other Ukrainian political prisoners have also had ‘confessions’ tortured out of them while imprisoned incommunicado, but they have later had real lawyers and a chance to expose the lack of any evidence and use of torture.

In this case, Vyhivsky had already been ‘convicted’ and sentenced in October 2015 to 11 years’ imprisonment when he gained access to an independent lawyer.  Ilya Novikov was even forced to sign an undertaking not to divulge any information about the appeal against the original sentence, which is likely to have provided details about the torture used to ‘persuade’ Vyhivsky to confess.  The appeal was, predictably, rejected on 31 March 2016.