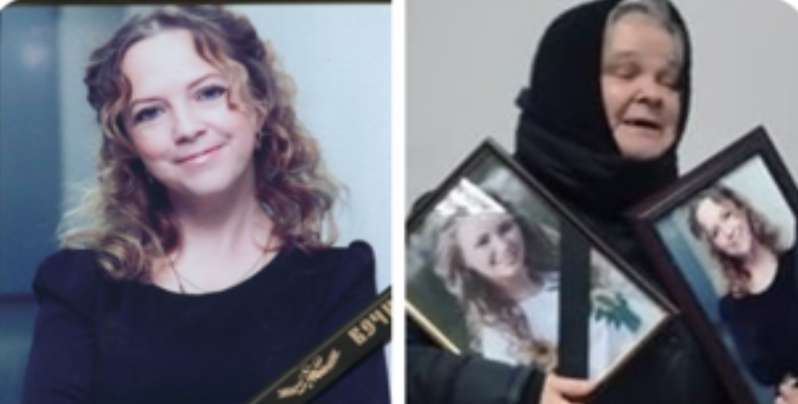 Dmytro Rossoshansky has been freed early “on amnesty” despite being sentenced without the right of amnesty for killing the sister of savagely murdered lawyer and human rights activist, Iryna Nozdrovska.  The family learned of this the same day that Yuri Rossoshansky, the convicted man’s father, claimed in court that he had not murdered Nozdrovska, and had confessed to the crime under police pressure.   Nozdrovska was almost certainly killed because of her determination to stop the man who had killed her sister, Svitlana, from escaping justice, and Rossoshansky’s secretive release is profoundly disturbing.

Svitlana Sapatynska, who was just 26 and had a small son, was knocked down and killed on 30 September 2015 by Dmytro Rossoshansky, who was heavily intoxicated at the time.   The young man was a neighbour who, despite his youth, had a long history of drug and alcohol abuse, He was also, however, the nephew of the head of the Vyshhorod District Court from 2007 to 2010, and then Acting Head from 2015-16. .  That and money were presumably behind the fact that previous arrests for driving under the influence of alcohol or drugs, as well as for car theft and robbery, had never even led to his losing his licence, let alone to more serious consequences.

Nozdrovska, who had already used her legal skills in many cases fighting corruption, spent the next two years proving that Rossoshansky had been intoxicated and working to ensure that the young man with connections did, nonetheless, answer for his crime.

This, it should be stressed, was no easy matter.  Almost certainly because of Rossoshansky’s uncle, it took the enforcement officers eight hours to take a blood sample to test for drugs and alcohol. Then a judge allowed Rossoshansky to be released on bail, and there seemed every reason to fear that this time he would once again go free.

In June 2017 a court found Rossoshansky guilty of manslaughter and passed a seven-year sentence.  The appeal against that sentence was heard at the Kyiv Court of Appeal on 27 December 2017.  Despite the clear grounds for a severe sentence, there seemed a real danger that Rossoshansky would be deemed to fall within the amnesty law and released.  Nozdrovska succeeded, however, in proving that there was ample evidence that  Rossoshansky had been drunk and that there had been considerable infringements of the Criminal Procedure Code during the trial in the first-instance court.  The material was sent for retrial, with Rossoshansky to remain in detention. In comments after the hearing, Nozdrovska wrote that it was thanks to public attention to the case that this had not happened.

On 24 October 2018, the Obukhiv District Court in the Kyiv oblast sentenced Rossoshansky to 7 years’ imprisonment without the right to amnesty, as well as imposing a large fine and banning him from driving for three years (presumably after the sentence).  That ruling, including the ban on any amnesty, was upheld on 9 July 2019 by the Kyiv Court of Appeal.  It is, therefore, extremely worrying that he was released on 29 January 2020.  His release was only learned from his and his father’s lawyer, Oleksiy Tsybenko, at a court hearing on 11 February. Tsybenko said that the 2016 law on amnesty had been applied, despite two courts having prohibited this.

The court hearings in question are now those into the murder of Iryna Nozdrovska.  She was abducted two days after succeeding in getting Rossoshansky’s case sent back for a new trial.  Her naked body, with many knife wounds, was found in a river a kilometre from her home.

Nozdrovska had taken part in the Euromaidan protests and had also been involved in other cases exposing corruption.  Her savage murder was widely reported in Ukraine and abroad, with the authorities under pressure to find her killers.

This, they claimed to have done, and very quickly.  63-year-old Yuri Rossoshansky,  the father of Nozdrovska’s sister’s killer, was arrested and apparently confessed to having committed the murder and all by himself. He then denied in court having been placed under pressure to testify against himself.

In fact there were doubts from the beginning as to whether Rossoshansky Senior really did commit the crime, or if he did, whether he was acting alone. It was feared that he could simply end up being acquitted when the case got to court.

His arrest was announced a mere 8 days after Nozdrovska’s body was found on 1 January 2018.  Neither the Vyshhorod Department of the Kyiv Oblast National Police, who were running the investigation, nor Viacheslav Abroskin, Deputy Head of the National Police, initially mentioned Rossoshansky, however the media immediately reported that it was him. On 8 January, Abroskin reported that the suspect had admitted the crime, but had not expressed any regret, and asserted that the investigators had amassed considerable material proof of his involvement.   In court, Rossoshansky objected only to being remanded in custody, saying that he feared for his safety and that of his family.  In fact, the charge of murder is not one that envisages any other preventive measure aside from detention, and the court remanded him in custody for two months.

Rossoshansky was claimed then to have committed the murder at the public transport stop in Demidiv after Nozdrovska got off the No. 355 marshrutka (a minivan carrying paying passengers) and met Rossoshansky, supposedly by chance.  According to his version, he had been drinking.  A row ensued, with mutual abuse, and he pulled out a knife and inflicted the stab wounds from which Iryna Nozdrovska died.   This was alleged to have been quite unpremeditated.

Rossoshansky, who was born in 1954, was then supposed to have carried her body over his shoulder for around a kilometre and a half to the river.There he stripped her of her clothes which he took home and burned.

Nozdrovska’s 18-year-old daughter Anastasia and her grandparents, who had just lost their second daughter, together with their lawyers, expressed concern about the case from the outset.  They did not believe that there could have been such an argument in a public place without somebody having heard something.

They were sceptical that Rossoshansky, a man born in 1954,  could have  carried her body along the street, before turning into an abandoned garden, without having been seen.  The overgrown state of this garden, and the difficulties of the road, including a ditch around two metres deep, raised doubts as to whether Rossoshansky was in a fit condition to do so and why.  The apparent answer that he wanted to reach the river in the hope that the body could thus be washed away or sink was unconvincing, as was the prosecution’s assertion that the body was washed up to the shore .As a resident of Demidiv, Rossoshansky would have known that the river in late December is more like a shallow stream.

In January 2019, Nozdrovska’s mother publicly accused a Ukrainian MP of being behind the murder of her daughter.  Whether or not there are adequate grounds for accusing this person is not clear, but the family and their lawyer, Oleksandr Panchenko have long been demanding a new investigation.  In January 2019, Panchenko told Gordon.ua that one person simply could not have committed the murder, yet the police were claiming there were no grounds for re-investigating.

He pointed out that Rossoshansky had named the wrong place for where the murder had taken place, and was now retracting his confession.  Panchenko said he believed that Rossoshansky was using the failings in the pre-trial investigation so that in future he would be able to escape liability.  In an earlier interview, Rossoshansky’s lawyer (Tsybenko) said that an investigative experiment had demonstrated that his client would not have been able to carry the body to the river.

The police assert that Rossoshansky’s DNA was found on Nozdrovska’s body and that is undoubtedly incriminating.  The problem, however, remains that if the entire prosecution’s version is undermined, and Rossoshansky could not have committed the crime alone, it is quite possible that a court would not convict him.

After the news that Rossoshansky Junior has also managed to get around two court rulings prohibiting his early release on an amnesty, an investigation into how this could have happened, and into the murder of Iryna Nozdrovska is surely imperative.