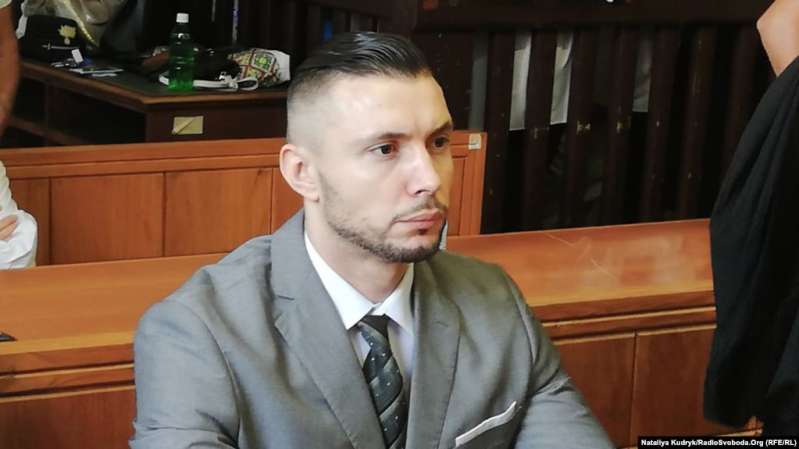 A documentary on the prosecution of Ukrainian soldier Vitaly Markiv over the death at the beginning of the war in Donbas of Italian photojournalist Andrea Rocchelli has presented revealing interviews with key witnesses whom the Italian prosecutor did not attempt to find. With Markiv currently facing a horrifically long 24-year sentence, it is clearly vital that all evidence should be available and this is what the authors of the film – its director, Cristiano Tinazzi, a journalist with experience of war zones, two other Italian colleagues, and a Ukrainian journalist from Hromadske.ua – have sought to present.

On 12 July 2019, 30-year-old Markiv was found guilty by a court in Pavia, Italy, of involvement in the deaths on 24 May 2014 near Sloviansk of Rocchelli and Andrei Mironov, the Russian rights activist who was acting as his interpreter.  There are multiple concerns about the charges against Markiv, the evidence presented, as well as that never sought, which the defence will present in the appeal against the verdict expected in Spring.

Excerpts from the film, entitled ‘The wrong place, were shown in the press room of Italy’s parliament on 14 February, with Tinazzi, explaining that their aim is to establish whether the events around the death of Rocchelli and Mironov were as presented by the prosecution. In order to achieve this, they took interviews of journalists who were in Sloviansk during those days and who knew Rocchelli and Mironov. They were able to find important witnesses who had not been questioned by the Italian investigators.  These included, most incredibly, the taxi driver who was driving Rocchelli and Mironov that day, as well as a young man whose photo Rocchelli had taken just before he was killed. Tinazzi points out that, if they were able to find these people, there was no reason why the investigators had not sought them out and allowed the court to hear their testimony.

Their aim, Tinazzi said, was to establish the truth about what had happened to their colleagues.  This was in honour of the dead men and also to prevent a scapegoat being found to take the blame.  Tinazzi expressed regret that the film could not be entirely balanced since the prosecution had refused to give their comments.

The journalists have also consulted with professional military experts who provided technical details about the weapons, including that used by Markiv.  These experts consider that, from where Markiv was positioned, he could not have seen people at a distance of one and a half kilometres, and his rifle did not have an optical enlarger.

Only excerpts were presented on 14 February with the authors hoping to complete the film in April.  This is an important and independent venture, and a crowdfunding page is available for those wishing to lend their support.

The presentation was attended by Antonio Stango, the President of the Italian Federation of Human Rights.  He explained that his organization had supported the making of the film as they uphold the principles of a law-based state, and he is convinced that Markiv’s trial was heavily influenced by Russian propaganda.  You wonder, he said, whether the judges were at all aware of the geopolitical situation against which the military incident took place.  Stango stressed that this film should not be viewed as pressure on the court, but as an opportunity to look at the facts in greater detail and distinguish them from the fakes that the case material contained.

Even the New York Times reported in December that “it raised eyebrows when the court released its reasoning in the fall showing that among the evidence presented by Italian prosecutors were reports from publications that are generally considered outlets for Russian propaganda.”

The ruling also cited an article from Russkaya Vesna producing a document supposedly from the Ukrainian authorities instructing Markiv’s fellow soldiers to testify in his favour.  The Ukrainian government has dismissed the alleged document as a fake, and the Italian prosecutor,  Andrea Zanoncelli has himself acknowledged that “it was never clear how genuine it was”.  Zanoncelli rather bafflingly claimed that the document had been presented “to show this thing existed, so that the court could evaluate it.”

The court is there to evaluate whether the evidence presented is sufficient to convict a person, not to assess whether the prosecutor is presenting real evidence or fakes. Neither judges nor jury need necessarily have been familiar with the Russkaya Vesna site, but it would have taken the prosecutor a matter of minutes to ascertain just how biased and unreliable this source is.

The open use of a Kremlin-funded propaganda channel (Russia Today) and of a ‘Russian World’ / pro-Russian militant-supporting website as arguments in this case is not the only disturbing feature of this trial.

The indictment bears an uncanny resemblance to the charges laid by Russia against Ukrainian military pilot and Kremlin political prisoner Nadiya Savchenko, with many of the same flaws in the story. In both cases, journalists were caught up in situations where two warring sides were engaged in active combat, yet it was claimed that one side had deliberately targeted the men as civilians.  Indeed, in the Italian case, there is positive denial that one side (the Russian / pro-Russian militants) was shooting, despite clear evidence, including from Mironov’s last words, that this was the case.

The Italian prosecution seemed quite unwilling to acknowledge that this was a battle zone and that Markiv was a soldier in service, and obeying orders.  It claimed that Rocchelli’s death had been murder, and that those who killed him and Mironov had known them to be journalists.  This was evidently accepted by the jury and is now asserted in the court ruling, although the shelling was from almost two kilometres away, and the men were not wearing anything to show that they were journalists.

The prosecutor initially accused Markiv of murder, but was forced to change that charge to ‘involvement’ since Markiv himself had no access to the mortar shells which killed the men. Markiv was supposed to have provided information to the Ukrainian Army about Rocchelli’s whereabouts.  The charges appear to be based solely on the contradictory testimony of William Roguelon, the French journalist who was travelling with Rocchelli and Mironov, and on a dangerously free interpretation of a telephone conversation reported by Italian journalist Ilaria Morani which the prosecution very strangely presented as being Markiv’s ‘admission of guilt’.

With respect to the Italian prosecution, one motive is brutally prosaic.  Markiv has dual Italian and Ukrainian citizenship, and, in fact, only returned to Ukraine to take part, first in Euromaidan, or the Revolution of Dignity, and then to defend his country of birth in Donbas. There were many Ukrainian soldiers near Sloviansk on 24 May 2014, but almost certainly only one could easily be arrested when he returned to Italy and tried as an Italian citizen.

Markiv’s knowledge of Italian is also critical to this story since Zanoncelli appears to have begun considering him as a suspect after coming upon an article by Ilaria Morani published in Corriere della Sera on 25 May, 2014.  In her text, which was, in fact, based on what she had been told, not what she herself heard, Morani misleadingly called Markiv “a captain”, and said that he was “on the tower at that time coordinating the defence of the city.”

Even in her article, it is clear that Markiv was warning the person he was speaking to that the area was dangerous and that journalists should not approach.

He then allegedly said:  "Normally we don’t shoot in the direction of the city and on civilians, but as soon as we see a movement we load the heavy artillery. This happened with the car of the two journalists and the interpreter. We shoot from here within a kilometre and a half. Here there is no precise front, it is not a war like Libya. There are actions scattered throughout the city, we await only the green light for the final attack ".

Although the court was provided with information as to Markiv’s true rank-and-file position, it repeated the false claim that Markiv was in charge.  It even claimed that Markiv was carrying out an evidently unlawful order which violates the Fourth Geneva Convention regarding the protection of civilians during conflict.   It goes on to assert that the Ukrainian soldiers’ ‘attack’ occurred without any provocation or attack from the enemy and that it was “aimed against journalists exercising their right to gather information about the conflict”

As mentioned, this ignores evidence presented by the defence, indicating that there had been gunfire prior to the use of mortar fire, and that this came from the militants, not from the Ukrainian army.  There was no unprovoked attack on journalists, but an exchange of fire in a war zone, in which journalists without press vests or other visible signs were tragically killed.  It is quite incredible, given the sentence passed on Markiv, that the prosecution has not even established which mortar actually killed the men.  Even if they were killed by mortar from the Ukrainian soldiers, and this surely needed to be ascertained before the trial began, there was simply no way that the soldiers could have known that there were civilians there.

The film’s interviews with other journalists will be valuable since the prosecution has relied on the testimony of the surviving journalist, Roguelon, despite this having changed radically.  Back in 2014, Roguelon acknowledged that he did not know where the initial gunfire had come from.  It was only four years later in 2018, during the trial of Markiv, that he suddenly ‘knew’ that it had come from up the hill, and therefore from the Ukrainian army position.

The defence has pointed to evidence confirming that the shooting had come from below, and therefore from the militants.  Roguelon, for example, recalled hearing a sniper shot, which he could not possibly have heard from a distance of up to two kilometres.  The angle at which the bullets hit the taxi also suggested that they had come from the militants who the owner of the Zeus Ceramica factory has confirmed were surrounding the building, and not from above.

The date has yet to be set, but it is known that the defence will be demanding that the investigators finally examine the site where the men were killed and carry out investigative experiments which would prove that the actions Markiv is accused of were simply impossible and that Markiv should be fully acquitted.