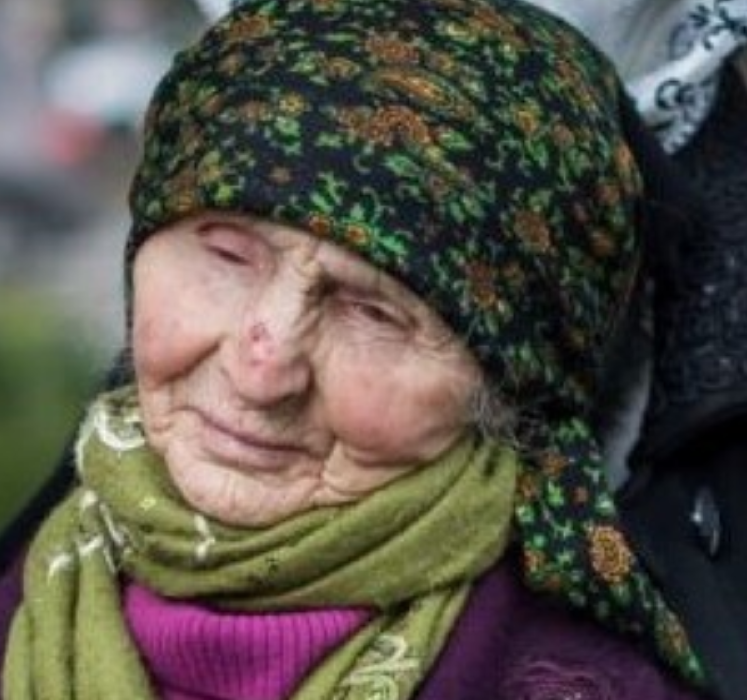 A ‘court’ in Russian-occupied Crimea has refused to consider compelling evidence that enforcement officers caused the death of 83-year-old Vedzhie Kashka through the force they applied when arresting the world-renowned veteran Crimean Tatar activist.  ‘Judge’ Olga Kuznetsova from the Kievsky District Court in Simferopol chose to ignore material proof and accept the claim from the prosecutor and Investigative Committee that Vedzhie Kashka died in the middle of the armed operation to arrest her because “she was old”,

The hearing on 14 February was over an appeal against the refusal by the Russian Investigative Committee to initiate criminal proceedings against five enforcement officers  over Kashka’s death, as well as with respect to the ambulance staff who failed to provide the medical aid that could have saved her life.  Lawyer Nikolai Polozov reports that the hearing was open in name alone as not one of the large number of people who wished to attend was admitted into the courtroom.

Polozov has long reported that Russian enforcement bodies are protecting each other over the actions that caused Vedzhie Kashka’s death on 23 November 2017, and now a Russian-controlled court has rubberstamped this.

The refusal to initiate a criminal investigation was made by ‘investigator’ Nadezhda Balashova back on 20 April 2018, however it took almost a year, before Polozov was finally given access to information about the events leading up to Kashka’s death, and at that time was even forced to sign a commitment not to disclose any details.  He has constantly needed to go through the courts to get access to any information and Balashova illegally blocked out the names of the officers who had taken part in the arrests on 23 November, 2017.

Once Polozov was finally able to see the full material, he understood that the ‘check’ carried out by Balashova had been a fiction, done merely for the record.

Since then, he has obtained an assessment from independent forensic experts who examined the original forensic assessment; the explanation of people involved in the case and the protocols of investigative activities. They concluded that there was a direct cause and effect relationship between the actions of the enforcement officers who carried out the arrest and Vedzhie Kashka being taken ill and her death.  The forensic experts gave a detailed account of which specific actions proved fatal, and it was on the basis of that assessment that Polozov lodged his appeal against the refusal to initiate criminal proceedings.

It seems clear that Vedzhie Kashka did not die “of old age” but as the result of excessive violence by the Russian enforcement officers who arrested her.  It is possible that her life could have been saved had she been rushed to hospital or at least resuscitated by the ambulance staff.  This, however, did not happen due to the obstruction of police ‘investigator’ Iryna Sidoropulo who insisted on first “carrying out an investigative operation”, namely forcibly taking money from the elderly woman despite her critical condition and the lack of any urgency.

Russia’s attempt to arrest the 83-year-old was part of an FSB ‘operation’ on 23 November 2017, seven months after the UN’s International Court of Justice ordered Russia to withdraw its politically-motivated ban on the Mejlis, or self-governing body, of the Crimean Tatar people.  Instead of complying with this ruling, Russia has since tried to discredit the Mejlis, including through the arrests of Vedzhie Kashka, and four other veterans of the Crimean Tatar national movement.  Although none of them was a member of the Mejlis, Russian and Russian-controlled media systematically presented them as members of the Mejlis, alleging that weapons and drugs had been found during searches (details here).

Vedzhie Kashka: “Is it really such a crime to be Crimean Tatar?”

The FSB’s carried out their violent ‘special operation’ on 23 November 2017  claiming that Vedzhie Kashka; Kazim Ametov; Asan Chapukh; Bekir Dehermendzhy and Ruslan Trubach had been trying to ‘extort’ money from a Turkish national, Yusuf Aitan. During a farcical trial, the prosecution was never able to explain why it had believed the testimony of Aitan when the latter was quite unable to explain why, if the seven thousand dollars in question had been his, he had signed a peace of paper confirming that he was borrowing this money from Vedzhie Kashka.  His claim that he had been threatened into doing so was simply absurd given the ages and state of health of all of the five respected members of the community whom the FSB decided to arrest.  Russia came very close to causing the deaths of two of the men who were held in the torture-like conditions of the Simferopol SIZO [remand prison] despite the lack of any grounds and health conditions that should have precluded any detention. (see: Court in Crimea confirms Russia had no reason to arrest – and kill - 83-year-old Crimean Tatar veteran Vedzhie Kashka )