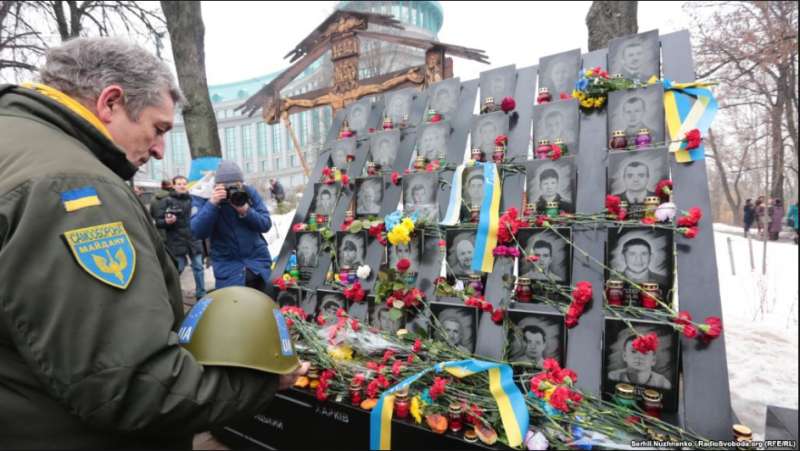 For The Ukrainian Quarterly*

It is six years since the last and bloodiest days of Ukraine’s Revolution of Dignity (Euromaidan), with the anniversary coming after major upheavals which could jeopardize the fate of most investigations into Maidan crimes.  The only trial of former Berkut officers charged with gunning down protesters is on the verge of collapse after the five suspects were handed over in the last exchange of prisoners, and the body responsible for all progress in investigations to date has been dissolved.

The blame does not lie with any one particular administration, but is the result of six years of procrastination or even obstruction of the investigations, as well as the lack of political will to properly carry out vital reforms of the judiciary and the enforcement bodies.

A year ago, the families of slain Maidan activists and their lawyers announced that they were considering the option of seeking justice at the European Court of Human Rights.  Their complaint that the authorities’ commitment to an effective investigation is in words alone has certainly not lost any relevance.

Back in February 2019, a major problem lay in the constant hampering of the work of the Special Investigations Department.  This largely autonomous body, within the Prosecutor General’s Office, was formed in December 2014 under the leadership of Serhiy Horbatyuk.  This was already a major step since, before that, various cases had been allocated to different bodies, with no coordination and, accordingly, no progress. The Department swiftly gained the trust of the families of Maidan victims, their lawyers and civic organizations linked with Maidan and began making significant progress on many of the investigations.

The Department’s problems began in October 2016 when Prosecutor General Yuri Lutsenko suddenly reorganized the Department, with Horbatyuk losing a considerable part of his responsibilities and staff.   All the crimes believed to have been committed by fugitive ex-President Viktor Yanukovych and his associates were separated out and placed under another department.

Lutsenko seems to have been eager for high-profile ‘successes’.  In fact, the methods used, particularly the very obvious tailoring of legislative changes to enable trial in absentia around the wish to prosecute Yanukovych, may result in the latter eventually winning a case against Ukraine at the European Court of Human Rights.  Warnings from Horbatyuk and other lawyers of this danger were simply ignored, and were probably one of the reasons why Lutsenko was often critical of Horbatyuk and his Department.

The Department did, in fact, carry out investigations into over 4,100 criminal incidents linked with Maidan, while a further 700 cases were under the jurisdiction of other enforcement bodies.

Even if the Yanukovych convictions are not later overturned, the focus on those cases and the cuts in the Department in 2016 and 2018 were obviously highly detrimental.

Sabotage of the Special Investigations Department’s work continued with cases sometimes arbitrarily taken away, including when they appeared to be making progress).

As well as the difficulties posed by the Prosecutor General and his focus on Yanukovych prosecutions, there was also frequent obstruction from the SBU [Security Service] or Interior Ministry.  In many cases, this may have been connected with the fact that officers under suspicion of serious crimes against Maidan activists were still employed in those enforcement bodies, and in many cases even held managerial posts.

There was extremely serious sabotage in Khmelnytsky where the Military Prosecutor’s investigators ‘lost’ the only undamaged bullet from the crime scene.  Without this it was impossible to determine whose weapon was used in the shooting from inside the SBU building on 19 February 2014 of unarmed protesters and killing of 73-year-old Lyudmila Sheremet.

The reform was broadly welcomed, but preparations needed to be in place to ensure continuity of all criminal investigations and accompaniment of court trials, including those which had been carried out by the Department under Horbatyuk, Oleksiy Donsky and other prosecutors.

The new administration of Volodymyr Zelensky declared its determination to achieve progress on Maidan investigations.  Since Zelensky’s Servant of the People party holds an unprecedent absolute majority in Ukraine’s parliament, there should have been no problem with making the changes needed.

This  proved not to be the case.  With around half of the Maidan investigations due to be handed over to the State Bureau of Investigations [SBI] on 20 November 2019, legislative changes were needed to allow investigators now dealing with Maidan crimes to transfer to the State Bureau of Investigations [SBI], in order to prevent disruption of the investigations.   The deadline was effectively 15 November, yet MPs on that Friday insisted on going home early, leaving the investigations in limbo until 3 December.  The legislative amendments might well not have been passed then either had Maidan lawyer Yevhenia Zakrevska not gone on hunger strike.  After the bill was passed and Zakrevska stopped her hunger strike, it still took Zelensky until 24 December 2019 to sign the bill into law.

There had seemed a glimmer of hope when Ruslan Truba was removed from his post, and replaced by Acting Director Iryna Venediktova.  Truba had appeared to be  cooperating closely with former Yanukovych aide Andriy Portnov, who has made his wish to see all Maidan cases, except those over the deaths of Berkut officers, terminated.

Any optimism proved ill-placed.  On 2 January 2020 Venediktova announced the appointment of Oleksandr Buryak as head of the newly-formed  SBI department

on investigating Maidan crimes.  There had been no transparency, no discussion and there remained absolutely no clarity as to the criteria used in choosing the successful candidate.  Buryak, who had been Truba’s Deputy, not only had no experience of working on Maidan cases, but was also implicated in the recent scandal involving Pavlo Vovk, President of the Kyiv District Administrative Court and some other judges.

This was Venediktova’s first ‘response’ to public pleas from Maidan victims and lawyers to consult with them in order to ensure continuity of all Maidan investigations handed over to SBI and to only appoint people with experience after open procedure.

It has not been the only worrying appointment.  Venediktova also ignored pleas from Maidan activists and NGOs, and appointed former Yanukovych lawyer Oleksandr Babikov as her First Deputy Director, despite the obvious conflict of interest.  There are reasons for believing that this appointment was effectively determined before the competition was even announced.  Babikov has since tried to deny any active role in Yanukovych’s defence, although there is documentary proof of such involvement and has denied any conflict since only the Director has any role over the Maidan investigations.  Since one of the roles of a first deputy is to replace the Director if the latter is ill or on leave, Babikov’s argument here also seems disingenuous.

It remains to be seen how this new department within SBI actually works; however, the dubious appointments are not the only grounds for concern.

As mentioned, the most prominent trial in Ukraine is now likely to collapse altogether after five former Berkut officers, charged with the mass murder of 48 Maidan activists, were handed over to the Russian-controlled Donbas militants in a prisoner exchange on 29 December 2019.  This came after a cruel mockery of an appeal court hearing where the outcome proved to have been known in advance and where the Prosecutor General Ruslan Riaboshapka replaced the prosecutors from the former Special Investigations Department with three people who would support the suspects’ release.

Zelensky later admitted that the decision had been political, but defended it, and indeed suggested that he would do it again.  He had not been willing to meet with the families of the victims nor their lawyers, who had been forced to endure a two-day mockery of judicial process.

It is possible that Russia, via their proxy ‘Donbas republics’, really did make the release of the five ex-Berkut men a prerequisite for any exchange of prisoners.  The Kremlin has recently stepped up its efforts to rewrite the facts about the Revolution of Dignity and, as the families of the slain Maidan victims and their lawyers warned, Moscow will use any means to destabilize Ukrainian society.

Few of us would like to tell POWs and hostages who had been tortured and imprisoned, some for up to five years, in occupied Donbas, that their release was worth less than the trial of five suspected killers, whose conviction, as Zelensky pointed out, will not bring the victims back to life.

On the other hand, there are very many POWs, hostages and political prisoners in occupied Crimea and Russia, and perhaps Ukraine’s leaders could have insisted that the trial of the five men had to end before they were released.

One of the frustrating defeats of the past six years has been in judicial reform. As of February 2019, 227 judges involved in persecuting Maidan activists remained in their posts.  There have been numerous occasions where it is the courts that have sabotaged Maidan investigations, including, most notoriously, the release from custody of the five Berkut suspects’ commander Dmytro Sadovynk in September 2014.  He immediately fled to Russia, as have a very large number of former Berkut and other Maidan suspects.

Interestingly, anger that the Kyiv Court of Appeal had been used to rubberstamp the release of the five suspected Berkut killers has also been expressed by Serhiy Dyachuk, the presiding judge in the men’s trial.  Riaboshapka and Zelensky have both tried to assure the public that the trial will be concluded, albeit in absentia.  In fact, this is in question.  During the first hearing into the trial after the men’s release, their lawyers said that they had not heard from their clients.  One of the lawyers pointed to Article 323 of Ukraine’s Criminal Procedure Code which states that a court hearing cannot begin if the accused do not appear.

For the moment, the judge has announced a break in proceedings while the suspects’ whereabouts are ascertained and they are informed of proceedings.  While everybody understands that the defendants will not appear, there is nothing at all automatic about switching to trial in absentia.  According to Olena Storozhuk, one of the victims’ lawyers, Ukrainian legislation demands that for this to happen, the defendants must first be placed on the international wanted list, via Interpol.  That could prove problematical as the men were released on the instructions of Ukraine’s Prosecutor General and did not flee, but were positively assisted in leaving government-controlled territory.  The men’s trial had taken a very long time because of the number of witnesses with victim status, and because the Special Investigations Department was intent on ensuring convictions that would not later be revoked.  Article 335 of Ukraine’s Criminal Procedure Code makes it obligatory to terminate criminal proceedings after defendants have been declared on the wanted list.

Perhaps all of these hurdles can be overcome, however it is not difficult to understand that the families of slain activists feel very betrayed.  After the developments of recent months, they are not alone in feeling serious concern about the fate of all Maidan investigations, and profound scepticism about assurances of ongoing commitment to achieving real and effective investigations and justice for the victims.