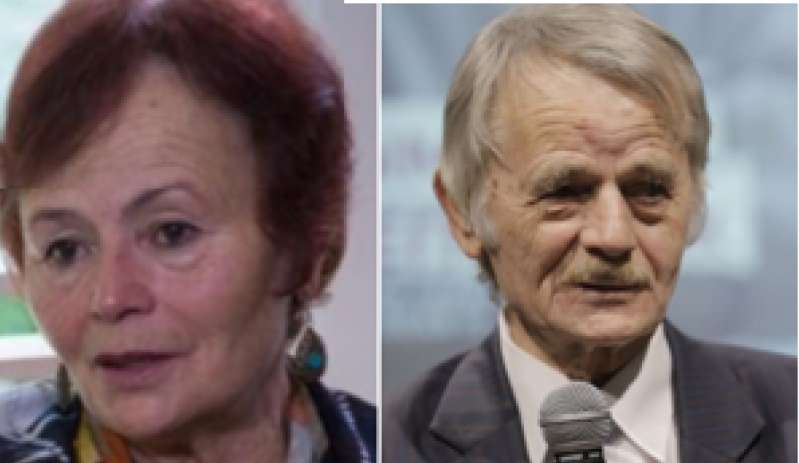 Dilyara Seitveliyeva, sister of veteran Crimean Tatar leader Mustafa Dzhemilev, has received a “warning against extremism” from the Russian occupation regime.  The document, which has reportedly been issued to several Crimean Tatar activists, including human rights defender Abdurashit Dzhepparov, claims that “events of an extremist nature aimed at destabilizing the situation” in Crimea are planned for 23-26 February.  There are no such plans, but such ‘warnings’ have become one of the methods of intimidation used under Russian occupation.  Having banished Mustafa Dzhemilev from his homeland, even Russia’s absurd ‘criminal charges’ cannot directly harm him, so the occupiers have on several occasions targeted members of his family.

The warning, received on 21 February, claims that the prosecutor’s office has information that the alleged “events of an extremist nature” have been organized by the Mejlis of the Crimean Tatar people.  The document notes that the Mejlis has been banned on Russian territory as extremist, without explaining that Russia was ordered by the UN’s International Court of Justice to withdraw this shocking ban on the representative assembly of the main indigenous people of Crimea back on 19 April 2017.  The fact that it has not done so does not make the ban any the less illegal, nor can any number of such warnings of prosecution obscure Russia’s continuing violation of international law in occupying Ukrainian Crimea.

The notification received by Dilyara Seitveliyeva calls her “a participant (organizer) of the above-mentioned mass events”.  She notes that she organized a meeting with two talented young poets – Seychre Kokche and Maye Safet, which several dozen people attended, and assumes that this is what was deemed “unacceptable activity”.   Zair Smedlya, the Head of the Election Commission of the Crimean Tatar Qurultay [National Congress], also received the document and calls it a standard form of pressure.

There are several specific anniversaries, including that on 23 February of the murder by the Bolsheviks of Noman Çelebicihan, Mufti, Crimean Tatar politician and the first President of the independent Crimean People’s Republic (crushed by the Bolsheviks).  These days, however, also mark the effective beginning of Russia’s moves to seize control of Crimea.  26 February is marked in Ukraine as the Day of Crimean Resistance to Russian Occupation.  A huge demonstration that day, organized by the Mejlis, prevented Moscow from achieving an effective coup d’état without the (overt) use of Russian soldiers.  This was almost certainly the reason for the arrest and long imprisonment of Deputy Head of the Mejlis, Akhtem Chiygoz and several other Crimean Tatars, and for the ban on the Mejlis.

The Head of the Mejlis, Refat Chubarov has dismissed Russia’s claims about planned events.  He told Krym.Realii that it would be “simply madness” to organize any mass public events on 23 and 26 February. This would simply get people into trouble and help the Russian occupiers to arrest and persecute even more people.

The occupation regime began prohibiting peaceful gatherings almost immediately after annexation.  Mustafa Dzhemilev is also a long-standing Ukrainian MP and was in Kyiv when Russian soldiers without insignia seized control in Crimea. He returned to Simferopol for the first time after that on 19 April 2014.  One of his actions after reaching the Mejlis  offices in Simferopol was to order that the Ukrainian flag be reinstated over the building in its rightful place next to the Crimean Tatar flag. Three days later, as he left Crimea, he was handed a document banning him from Crimea (and Russia) . Although Moscow claimed to know nothing about this, the ban was first implemented on 2 and 3 May.  It was his attempt to cross into Crimea, met by around 5 thousand Crimean Tatars, that prompted the first wave of Russian political trials of Crimean Tatars.  In early July, Refat Chubarov was also banned from his native Crimea.  The occupiers prohibited any mass remembrance events for the 70th anniversary of the Deportation of the entire Crimean Tatar people, which is recognized by Ukraine as an act of genocide.  All of these bans have continued throughout the six years of Russian occupation, with Russia using grotesque ‘criminal charges’ against both Mustafa Dzhemilev and Refat Chubarov as a way of ensuring that they could not return after the initial five-year ban ended.