Who is behind the campaign to discredit Maidan and turn its victims into perpetrators? 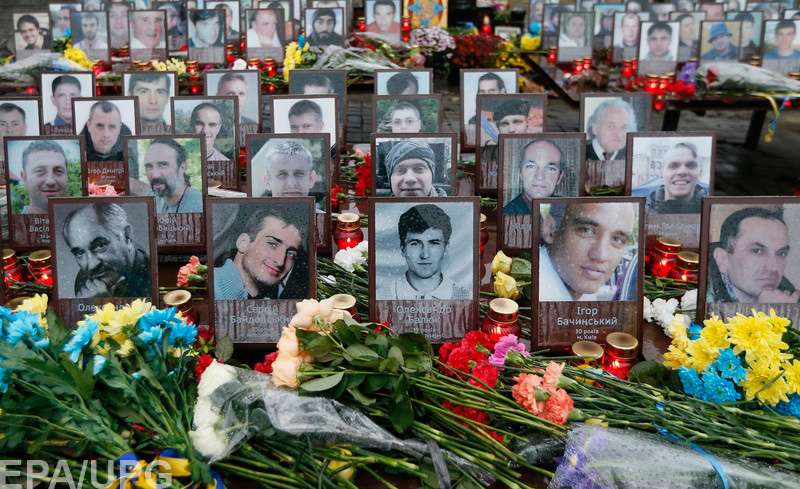 Two major media watchdogs have published studies of a campaign underway in Ukraine to discredit the Revolution of Dignity (the Euromaidan protests) and to push a narrative on Russia’s invasion of Crimea and military aggression in Donbas which closely follows the Kremlin’s.  The publications coincide with a Hromadske journalist’s probe of three Maidan cases, which clearly disproves one of the underlying refrains, namely the claim that there is no evidence against suspected Berkut killers.

Anastasia Stanko from Hromadske.ua was merely citing the kind of evidence that prosecutors from the former Special Investigations Departments have amassed over the last six years since the bloodiest days of Maidan.  The automatic rifles almost certainly used to gun down protesters disappeared from the base after 20 February 2014 and were later found in a lake, with the numbers on them rubbed off.   There are, however, enough bullets, including those that inflicted fatal injuries which can be linked to specific rifles, formally issued to specific Berkut officers, including two of the five men released in an exchange of prisoners on 29 December 2019 IPavlo Abroskin, Serhiy Zinchenko)

Oleksiy Donsky, one of the prosecutors working on Maidan cases from the end of 2014, reports that the Interior Ministry management also issued 156 Kalashnikovs and 40 thousand bullets to ’titushki’ or government-paid thugs on 20 February.  Although the initial attempt to issue them during the night appears to have failed, with the man organizing the thugs having said that they never signed up to killing people, they are known to have been given out to the thugs later.  Those weapons have never been recovered, making it impossible to identify whether titushki were involved in the deaths either of activists or of enforcement officers. .

Donsky pointed out that the case over this criminal issue of lethal weapons to thugs was handed to the court back in January 2016, but has never got beyond preparatory stage.  He blames the defence lawyers in this case, but in many others there has been obstruction from the Interior Ministry, the Prosecutor General’s Office, the SBU [Security Service] or individual judges.  Events of the last six months, including some very suspect appointments and the release on 29 December of five former Berkut officers as part of the prisoner exchange, have seriously eroded confidence that there will ever be justice for the victims.

One of the people widely believed to have influence on highly contentious appointments and investigations in the State Bureau of Investigations (which has taken over many Maidan cases) is Andriy Portnov.  He was deputy head of ex-President Viktor Yanukovych’s administration during the Maidan protests and only returned to Ukraine on the eve of President Volodymyr Zelensky’s inauguration.  He is one of the most active figures in the current campaign to discredit the Revolution of Dignity and to at least suggest that its victims should be treated as perpetrators.

Although there is fairly widespread recognition that a campaign is underway to try to discredit Maidan, there is not necessarily full agreement as to who is behind it.  In an article asserting that the drawn-out investigation and impunity have enabled Maidan opponents to raise their head, Krystyna Berdynskykh spoke with several analysts.

Iryna Bekeshkina from the Democratic Initiatives Foundation believes that Yanukovych’s old ‘Party of the Regions’ is attempting to avenge itself and make a comeback after the battle for Ukraine which they lost in 2013/14.  Among the Ukrainians who gave their votes to Zelensky and his Servant of the People party in 2019 were many who would earlier have voted for the Party of the Regions.  The latter is now trying to reclaim its ‘electorate’, she believes, with manipulation and distortion of Maidan one of its methods.   Oleksiy Antypovych, head of the Rating public pollster points to the lack of a well-defined position on the Revolution of Dignity in Zelensky’s team. “Everybody feels a weakening of control.  You can speak out in defence of ‘AntiMaidan’ and you won’t suffer any consequences”, he says.  Bekeshkina believes that the same can be said of other events and processes, with Zelensky’s team trying to please everybody.  With respect to Maidan, there are a number of MPs inside the Servant of the People party who were themselves against it.

Although Portnov ostentatiously chose the eve of Zelensky’s inauguration to reappear in Ukraine, the key point is that the previous five years had probably convinced him and others closely linked to the Yanukovych regime that impunity could be expected. This, many analysts believe, is the reason that he, Olena Lukash and many other people from Yanukovych’s team now feel that they can publicly “raise their head” again.  There are plenty of media willing to provide them with a platform for serious distortions of the facts regarding the events from November 2013 to February 2014, including those believed to have links with Viktor Medvedchuk, the  contentious and rich Ukrainian MP with close ties to Russian President Vladimir Putin.

The surge in disinformation and fakes about Maidan since November 2019 has prompted both the Institute for Mass Information [IMI] and Halyna Poptsova from Detector Media to carry out assessments of what both are agreed are efforts to discredit the Revolution of Dignity. While such attempts are not new, the scale of this campaign is unprecedented.

IMI names Portnov; Lukash and Medvedchuk as having been most active in a campaign to discredit both Maidan and the slain activists [Nebesna Sotnya, or Heavenly Hundred].  They were provided a platform by the website Strana.ua and media associated with Medvedchuk (ZIK, 112.ua and NewsOne).

There was serious manipulation, for example, over claims that the list of slain Maidan activists was half “falsified”.  Lukash and Portnov pretended to have uncovered new information showing that many of the names of victims should not be there.  IMI points out that there was no sensation and that Yuri Butusov, Chief Editor of Censor.net  had reported back in March 2018 that the correct number of Heroes of Nebesna Sotnya was likely 86, and not 107.

If Butusov’s aim had clearly been to uphold justice and truth, and honour only those who genuinely perished on Maidan, the Portnov / Lukash alleged “revelations” were aimed solely at trying to discredit Maidan.

The same material also tries to claim lack of any proof that Berkut officers were involved in the gunning down of activists, although there is considerable proof.  Their text, as well as others on Strana.ua, have pushed the claims that there was a group around Maidan defender Volodymyr Parasiuk who shot at protesters or that it was Maidan activists who first began shooting.   The texts tend to be extremely manipulative and claim that they are revealing information that has been concealed because it doesn’t fit the preferred version.

It is, however, true that a law was passed immediately after Yanukovych’s flight guaranteeing immunity to Maidan activists.  Many activists had been imprisoned, or otherwise prosecuted on fabricated charges, so the move had seemed justified, however this question is undoubtedly contentious and the Acting Director of the State Bureau of Investigations has suggested that she thinks the amnesty law should be revoked.

It is when it comes to the supposed “consequences of Maidan” that all the above-mentioned media closely echo the line taken by Russian state-funded propaganda.  The message they all push is that Maidan was a “state coup” and that this “bloody path” was then thoughtlessly transferred to Donbas, with the conflict there labelled “a civil war”.

Some of the other manipulative ploys cited in the IMI study – the use of an extremely selective choice of supposedly “disillusioned experts” or activists, and the claims about “Georgian snipers” on Maidan have also been seen on Russian propaganda sites.

At the very beginning of her study, Poptsova notes that “the objective of Kremlin propaganda is to distort the memory of the events and participants in Maidan.  That will allow it to place liability for the crimes committed by Russia and the Kremlin-loyal Yanukovych team on “insurgents”.

Hearkening to the idea of the Overton window, or window of dialogue, being the range of policies and ideas that will be viewed as acceptable to the mainstream population at any given time, Poptsova suggests that Portnov and the people he calls his team have set about changing that range inside Ukraine. Such a change would lead to “executioners becoming victims, heroes – killers and victory – betrayal”.

The pro-Russian segment of Ukrainian media have, she says, been actively circulating disinformation about Maidan aimed at supporting the Kremlin’s narrative.  The aim is to free the Yanukovych regime from liability for the violence against protesters, and Russia from liability for the war and occupation of Crimea by discrediting the protests and calling for repressive measures against them.

Poptsova dates this new campaign from 21 November 2019, with the article in question citing Portnov and published on Ukraina.ru, a website that, like Strana.ua, can be expected to always echo the Kremlin line on any events related to Ukraine.  In a thoroughly toxic piece on Strana.ua, for example, the authors claim that a “civil war” was launched by Maidan, and that it was anti-Maidan protests after Yanukovych’s flight that “ended with Crimea joining Russia and the war in Donbas – between supporters and opponents of the new Kyiv regime  Moscow supported the latter [i.e. the opponents], providing them with weapons and military experts”.

No mention of armed Russian soldiers without insignia, armed Russian paramilitaries, major military offensives at Debaltseve and Ilovaisk, etc.  Russia just “helped” opponents of Maidan.   Poptsova provides many examples of such narrative, as well as of the manipulation of sociological data, etc., used to distort the real level of support for Maidan in Ukraine, not to mention the facts about Russia’s aggression.

While Strana.ua has long been recognized as a publication that promotes a pro-Russian and / or anti-Ukrainian slant on just about everything, ZIK was until June 2019 a publication that was not viewed as having a particular political agenda.  It has now, however, become the third media (after NewsOne and 112.ua at the end of 2018) to be taken over by Taras Kozak, a person closely linked to Medvedchuk.  The fact that 112.ua has a strong English-language page has probably meant that a lot of people read its website without due caution.

How quickly any society’s “window of dialogue” changes is not clear, but it is probably dangerous to assume that a long period is needed in the case of unrelenting disinformation.